Some new projects near JFK are giving a transit hub in Jamaica, Queens, another shot at being the foundation of an Airport Village. 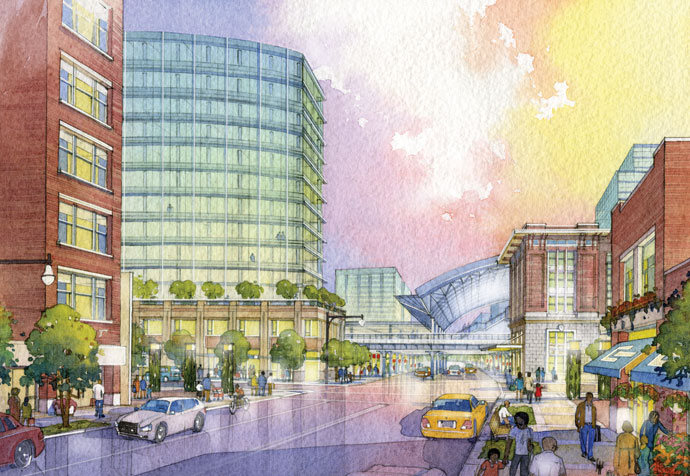 A rendering of Sutphin Boulevard in Queens, N.Y., once redevelopment of Jamaica Station near JFK International Airport is complete.
Photo courtesy of Greater Jamaica Development Corp.
by MARK AREND
O 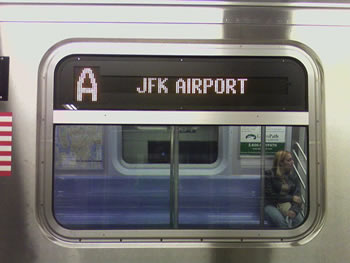 ne of these things is not like the others: Amsterdam Schiphol; Seoul, South Korea’s Incheon International; Paris Charles de Gaulle International; New York’s JFK International. All four are their nation’s primary gateways for international passengers. But after that, JFK parts company with these and other global air hubs, because it lacks an adjacent airport city, a concept first explored in the 1970s by Site Selection then-publisher Mac Conway.

More recently, the term was defined in these pages in 2009 by Athens International Airport CEO Dr. Yiannis Paraschis as “the transformation of an airport’s conventional image from just an off-city mode for transportation to a destination in its own right for business, shopping and leisure, contributing to the overall prosperity of the airport and also the adjoining communities while additionally acting as a catalyst for boosting employment and rising land value.” That definition still works, and it illustrates the challenges facing JFK Airport and environs if the airport is to ever be anything more than terminals and runways for international visitors to New York fronting Jamaica Bay in Queens, N.Y.

It turns out there’s more going on behind the scenes than would be apparent to users of JFK, even to many New Yorkers, that point to an emerging Airport Village, if not Airport City, in Jamaica, N.Y. Local and regional authorities — including the Port Authority of New York and New Jersey, Empire State Development Corp., New York City Economic Development Corp. and private investors — are relaunching a development project at AirTrain Station (also referred to as JFK’s Terminal 10), a transport hub linking bus services, the Long Island Rail Road (LIRR), the AirTrain subway to JFK and the New York City Transit subway system.

Previous attempts to redevelop parts of Jamaica were stymied first by the economic fallout of 9-11 in 2001, and then by the recession of 2007, 2008 and beyond. The third time will be the charm, says John Markunas, who heads marketing and real estate development for Greater Jamaica Development Corp (GJDC). From 2002 to 2005, Markunas was director of marketing for a project called JFK Corporate Square, at the same location the current Airport Village is getting underway. Today, he’s overseeing a process with actual private capital investment at work on hotel and residential projects at AirTrain Station and growing unanimity on the part of government stakeholders that the time has come to get JFK’s Airport Village built.

Markunas points to recent private and public change agent projects directly across the street from the AirTrain Station hub. The private developments are a 110,000-sq.-ft. (10,200-sq.-m.), 240-room Hilton Garden Inn, and The Crossings at Jamaica Station, a residential/retail project that will add 580 apartments to the area’s inventory. On the public infrastructure project side, there is an LIRR underpass that had housed a printing press now being redeveloped for retail space; construction of a right of way — the Atlantic Avenue Extension — that will facilitate access to downtown Jamaica; and realignment of Archer Ave. at Sutphin Blvd. by the rail station, which involves widening sidewalks, new bus lanes, lighting, landscaping and other improvements.

As with other Airport City development initiatives around the world, multiple parties with sometimes diverse agendas are involved, which can lead to delays if not more serious impediments. To that point, Markunas and his agency willingly play a leadership role. They herd cats.

“GJDC can be considered the primary advocate, but more importantly, the primary facilitator for the Airport Village concept,” he says, “because its mission as a community-building organization is to plan, promote, coordinate and advance responsible development to revitalize Jamaica and strengthen the region.”

Having overcome the challenges associated with bringing in pioneer projects — the hotel and mixed-use development — Markunas cites three main ways he works to keep the train on the track and advance the Airport Village concept from notional to reality. He herds cats by engaging stakeholders with clear communication of GJDC, community or other stakeholders’ objectives; doing pre-development work so other stakeholders can develop on their own; and communicating publicly and transparently with the Port Authority, NYCEDC, the Transit system and Empire State Development — a process Markunas refers to as “herding tigers.”

It’s likely that some of this development would have taken place any way in due course — Jamaica and environs are seriously “under-hoteled” and “under-retailed” relative to areas in close proximity to other major international airports. So are potential investors thinking in terms of airport-related economic development or simply looking at new sites in an area eager to win their projects?

“Yes, they are thinking in terms of airport-related economic development, and by investing in the AirTrain Station nexus, they are capitalizing on ridership on the AirTrain, the LIRR, the subways and buses as well as pedestrian traffic,” says Markunas. “Some investors will be strictly aviation-related. Some will capitalize on the secondary and tertiary economic development flow such as transit ridership, JFK employees and so forth.”

Another impetus for renewed talk of an Airport City at JFK is Gov. Andrew Cuomo’s recent airport Master Plan Design Competition, announced at an event in October 2014 to unveil the governor’s plan to modernize and revitalize JFK, LaGuardia Airport, Republic and Stewart International Airports, “bringing them up to 21st century standards for service, access and amenities,” according to a release. Vice President Biden was on hand at the event to lend federal support for the project.

The Master Plan Design Competition calls on planners to redesign the entire John F. Kennedy International Airport, according to the governor’s office. Submitted designs in the competition were to include: “enhancing the transportation network, including that of the existing AirTrain that currently shuttles passengers between terminals, parking areas and the subway and LIRR; exploring the need to increase hotel capacity in the immediate area surrounding the airport; implementing state-of-the-art amenities that are reflective of the New York region and also provide guests an array of dining and shopping options; and upgrading facilities across-the-board to modernize the airport.”

Markunas says the competition is significant to efforts in Jamaica to develop an Airport Village anchored at the AirTrain Station — JFK Terminal 10. “It is government’s high recognition that JFK is deficient in serving its flyers and the airlines and employees at JFK. The significance is high in that it calls for improving hotel and meeting/conference space and incorporation of Airport City concepts on or near the airport. Concepts are to include but not be limited to office complexes, conference and training centers, medical complexes and other facilities that take advantage of JFK’s status and location.”

Even if a fraction of that gets built as work proceeds at the AirTrain Station in Jamaica, in several years New York might get its Airport City after all. 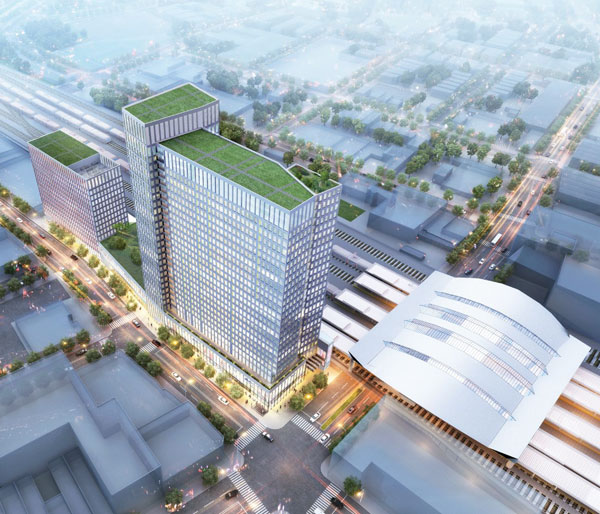