New data show which companies and locations in the United States are attracting the big money. 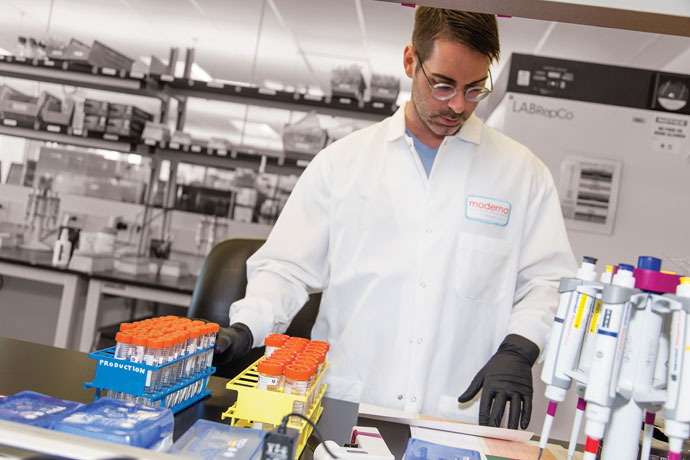 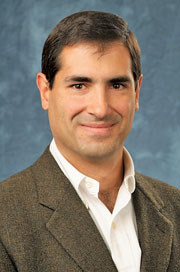 nvestment in US biotech and medical device firms in 2014 reached its highest level in seven years, with $8.6 billion invested into 789 deals, says the MoneyTree Report released in mid-February by PricewaterhouseCoopers (PwC) LLP and the National Venture Capital Association (NVCA), based on data provided by Thomson Reuters.

It was a 29-percent increase in dollars but a 3-percent drop in deals compared to 2013, says the report, entitled “Biotech funding surges.” Biotech investment dollars rose 29 percent compared to 2013 to $6 billion, while the number of deals decreased 4 percent to 470 deals, making it the second largest investment sector for the year in terms of dollars invested, behind the media and entertainment sector. “The Medical Devices industry finished 2014 up 27 percent in dollars to $2.7 billion,” says the report, “and the number of deals remained relatively flat in 2014, compared to 2013.”

“The life sciences sector saw five megadeals last year, a testament to the highly innovative biotech and medical device technologies and the resulting confidence of venture capitalists in the business models of these start-ups,” said Greg Vlahos, Life Sciences partner at PwC, noting the $446 million raised by Moderna Therapeutics in Cambridge, Mass., and the $200-million round by Intarcia Therapeutics, which is headquartered in Boston and has manufacturing in the Bay Area municipality of Hayward, Calif. “Given the strong level of investments in this sector and others in recent quarters, we expect continued high investment levels in life sciences in the first half of 2015.”

In 2014, total venture capital dollars invested in the US across all industries was $48.3 billion in 4,356 deals, including $14.8 billion in the fourth quarter — the highest annual and quarterly investment totals since 2000. “With a 33-percent increase in funding for early-stage life sciences companies in 2014, start-ups are likely to continue to do well in the year ahead,” said Vlahos.

“With the technology sector grabbing all the headlines, it’s worth noting that for the second year in a row biotech companies accounted for more than half of all venture-backed IPOs,” said Bobby Franklin, president and CEO of the NVCA.

Analysis by EY in its 2014 “Unlocking Borders” report found strong biotech performance among the publicly traded companies in the four established centers of the US, Europe, Canada and Australia, which saw 2013 revenues increase by 10 percent relative to 2012. But R&D spending contracted in Europe by 4 percent in 2013, “indicative of a much more constrained financing environment and an industry that experienced lower overall revenue growth,” said EY. By comparison, US R&D spending rose by 20 percent in 2013. And while analysts are busy tracking SME successes and failures and M&A activity, it’s big firms who continue to carry the payload. “Virtually all of the global industry’s 2013 revenue growth came from the 17 US-based commercial leaders, which posted strong increases in revenue and profits on the back of important new drug launches,” said the EY report. The biggest drivers of growth? Biogen Idec, Celgene, Gilead Sciences and Amgen. Among those four companies, Site Selection’s New Plant Database since January 2013 has tracked a $200-million investment by Amgen in Singapore and a $47-million, 50-job expansion by Gilead in Edmonton, Alta.
— Adam Bruns

As the Intarcia and Moderna deals hint, Boston and the Bay Area (including Silicon Valley/San Jose) continue to reign supreme as life sciences locations.

“In 2014, Boston received the highest biotechnology investment among all markets since MoneyTree was launched in 1995,” said Vlahos. Others lurking at the top (see chart) include Chicago, New York City, and North Carolina’s Research Triangle. 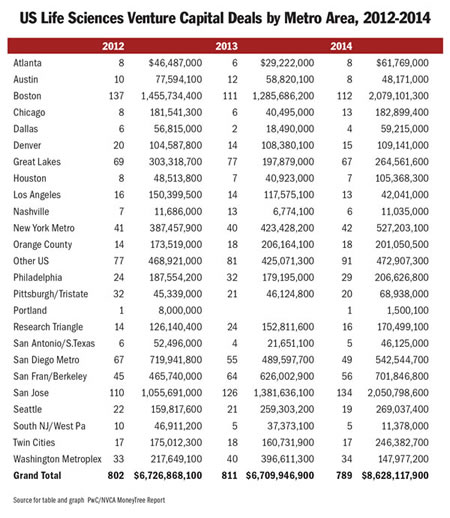 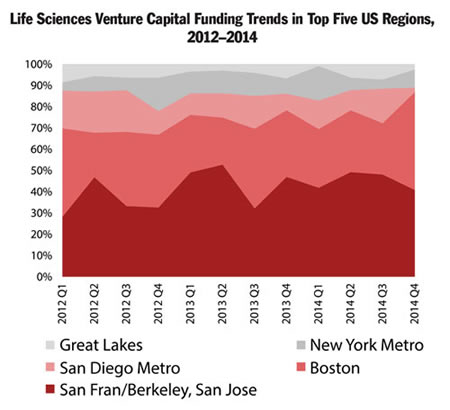 A pioneer in developing messenger RNA Therapeutics (mRNA Therapeutics™), Moderna last June announced a 50,000-sq.-ft. (4,645-sq.-m.) headquarters, lab and manufacturing expansion to a building in one of the most sought-after life sciences addresses in the world: Kendall Square in Cambridge, Mass. Moderna’s former headquarters in Cambridge will be dedicated to R&D and GMP manufacturing. The new site will house Moderna Venture Incubator laboratories, non-GMP production facilities, and the relocated HQ offices.

“Moderna’s rapid growth has led to our expansion in Cambridge — a city with the right resources and talent to fuel our continued success,” said Stéphane Bancel, founding president and CEO of Moderna, last summer. Less than three years after launch, the Moderna team had grown to about 145 people in Cambridge by December 2014, and the company anticipates hiring about 100 new staff this year.

Collaboration is driving that growth. In addition to its proprietary research programs, Moderna has strategic research agreements with AstraZeneca, Alexion Pharmaceuticals and DARPA (the Defense Advanced Research Projects Agency). In addition to 16 ongoing research programs as of last June, AstraZeneca is adding another 15 programs to its eight programs already underway. Alexion intended to add more programs following the two it initiated upon signing an agreement with Moderna in January 2014.

Since 2011, Moderna has received more than $1.4 million in tax incentives from the Massachusetts Life Sciences Center based upon commitments to create more than 70 new jobs in the Commonwealth.

“Moderna is firing on all cylinders, making important discoveries on the core science behind mRNA drugs, advancing research programs and filing key patents to drive future growth,” said Bancel. “We are grateful to the Commonwealth of Massachusetts and the City of Cambridge for their support. Moderna is committed to investing in Cambridge — an important global hub for biotechnology research, development and commercialization.”