Bridges To the World

Florida is nothing if not globally connected. It’s about to get more so. 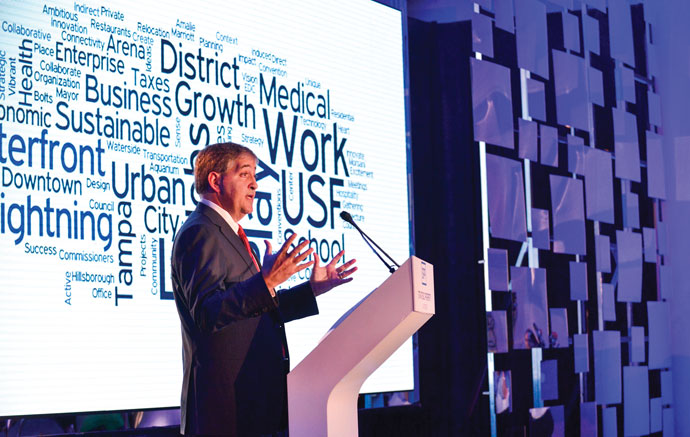 eff Vinik, the owner of the National Hockey League’s Tampa Bay Lightning, has a vision for his team and for his city, and isn’t afraid to spend money to achieve it.

In December, he revealed his plans to redevelop Tampa’s waterfront Channelside district, including locating the USF Health Morsani College of Medicine and USF Health Heart Institute on land he has offered to donate. The plan will cost $1 billion to realize over the next five to 10 years, with $30 million coming from city reimbursements for sidewalk, telecom and other infrastructure necessities.

Moving Both Ways
In February Volkswagen Group of America (VWGoA) announced that the Port of Jacksonville, Fla. (JAXPORT) will be VWGoA’s Southeastern US port. New VW, Audi and Bentley vehicles will be imported and distributed through the port beginning on May 1. VWGoA plans on transporting 100,000 cars within one year, and approximately 550,000 units in the next five years, through JAXPORT.

Until now, explains VWGoa spokesperson Carsten Krebs, the VW subsidiary has moved cars through the Georgia Ports Authority’s Port of Brunswick, as well as using the Port of Davisville in Rhode Island, the Port of Houston and the Port of San Diego, while also using the increasingly car-congested Veracruz in Mexico and the Port of Halifax, N.S., in Canada, and steering its Lamborghinis toward the Port of Baltimore. VW will still maintain some ro-ro business in Brunswick, including Porsches.

Driving the redevelopment is walkability, via a ribbon of mixed-use space encompassing five types of space: a medical education and STEM (science, technology, engineering and math) district, office, residential, hospitality, and retail and entertainment.

Tampa and other Florida cities appear to need that walkability. According to a June 2014 report ranking walkable urbanism in the 30 largest US cities from Washington, D.C.-based LOCUS, a program of Smart Growth America, Tampa ranked 28th, with only six walkable places. Miami was No. 23. Orlando was dead last at No. 30, but the report noted that it was among those cities showing the most promise for improved walkability, and could jump to as high as No. 18 in the near future.

Vinik and USF officials are ready for Tampa’s future to be now.

“The project not only elevates USF Health to new heights as an academic and medical research center, but it advances one of the most important missions we have — to create a healthier and more sustainable community,” said USF President Judy Genshaft as she pledged to champion the plan before the Florida Board of Governors, Gov. Scott and the Florida Legislature. “This downtown location is spectacular in that it opens the doors for USF Health to recruit and retain more world-class researchers and top students, who will want to be part of this exciting downtown atmosphere.”

In a statement in late January after his board approved a resolution supporting the plan, Tampa Bay Partnership Chair and President and CEO of Fifth Third Bank (North Florida) Brian Lamb said, “This opportunity will create 2,100 direct and nearly 4,000 indirect jobs and will eventually lead to an $800-million economic impact that will positively influence the eight-county region for years to come.”