Buzz in the ’Burbs 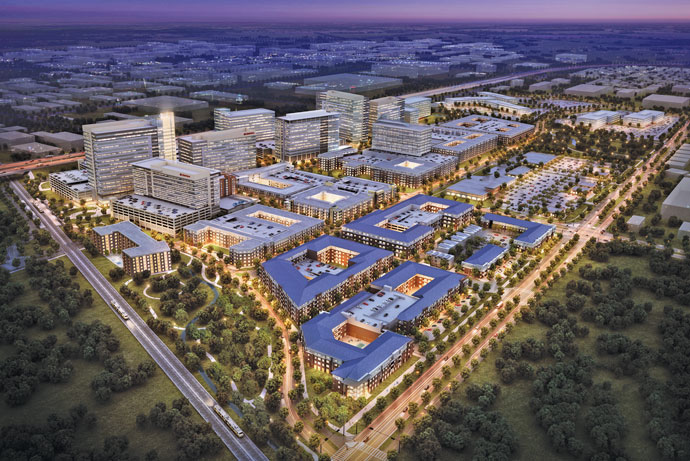 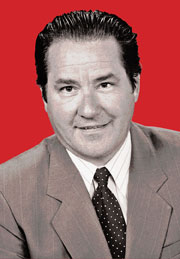 “The reports of the death of the suburban office campus have been greatly exaggerated.”
— John H. Boyd, February 11, 2015

For much of the past year, we have seen a number of high-profile corporate headquarters relocating to our nation’s downtown business districts. Cadillac’s head office move from Detroit to New York City’s SoHo neighborhood was one highly publicized example. Here, the restructuring General Motors Division made it clear that the draw of a vibrant urban setting dovetailed well with the company’s new branding direction (“This is not your father’s Cadillac”) and its desire to be in a location that would appeal to millennials and other young professionals that share the same affinity for working, living and playing in an exciting downtown environment like Manhattan’s SoHo.

Which suburban office markets are increasingly on our clients’ radar screens when it comes to high-end corporate office relocations? Below, in alphabetical order, is our Top 50 list, with their respective metro area names in parentheses. Regarding Canada — where our firm has been especially active over the years — a declining Canadian dollar and certain tax advantages there are causing an uptick in interest by American firms.

Notwithstanding these high-profile downtown moves, the suburban office market is very much alive and well throughout the country. From our work with HR department heads, recruiters and relocation managers, the popular notion that most young Americans want to live in these urban enclaves is more perception than reality. Compared to other age groups, millennials are more likely to prefer downtown living, but it is only a small share.

From our work with HR department heads, recruiters and relocation managers, the popular notion that most young Americans want to live in these urban enclaves is more perception than reality.

While millennial recruits and other young transferees are not necessarily interested in golf courses and gated communities, they do like jogging trails, parks and open spaces. Millennials deep down may be suburbanites after all, based on a recent survey of the National Homebuilders Association which found that 66 percent of millennials want to live in the suburbs; 24 percent want to live in rural areas; and only 10 percent prefer to live in a city center.

Atlanta, a growing headquarters mecca, is probably the best example of a place where head offices continue to trend to the suburbs. Mercedes-Benz is the latest to choose a suburban Atlanta site with plans to construct its headquarters campus on a 12-acre site in Sandy Springs not far from the planned new headquarters of Cox Media Group. State Farm, Scientific-Atlanta, Home Depot, Pulte, GEICO, e.g., have all made similar choices in various Atlanta suburbs — though some would observe that with the size of Greater Atlanta, some of these neighborhoods have graduated from suburban to urban.

Corporate headquarters mobility continues at an all-time high. Immune from relocation and restructuring programs in the past, the executive suite is now untethered like never before. It is a growth sector for our site selection firm. The main factors influencing the head office location decision can be gleaned from our acronym “TALIO” for these five drivers: Talent, Access, Lifestyle, Incentives and Operating Costs.

Our head office projects typically include a mix of downtown and suburban searches, with suburban searches far-outnumbering downtown projects. In one respect, it is a numbers game. While every city has one downtown, it usually has several Class-A suburban office markets suitable to accommodate a head office move. Also, it’s no surprise that many downtowns are facing serious quality-of-life and public safety challenges. DuPont’s move from its historic headquarters in downtown Wilmington to the Chestnut Run suburbs came at a time when the city was experiencing a high-profile series of violent crimes.

While the downtown lure is real for many companies, it is a trend prone to overstatement. Indeed, the reports of the death of the suburban office campus have been greatly exaggerated.

Several recent high-profile relocations by major automakers are worthy of mention here, as they provide a window on head office relocation trends. In addition to Cadillac’s move to SoHo and Mercedes-Benz’s move to Atlanta, the huge, 4,000-employee relocation of Toyota’s US headquarters from Torrance, Calif., to Plano, Texas, underscores the continued appeal of the suburban office campus. Subaru’s decision to build a new head office in Camden shows the power of incentives in the form of the well-funded Grow NJ Fund. Porsche’s headquarters move to the new Aerotropolis mixed-use development near the Atlanta airport underscores the importance of international air service in today’s global economy.

Even electric car maker Tesla is having an impact here. Its decision to locate its $5-billion gigafactory in Reno is raising the profile of suburban office markets in the nearby Carson Valley/Lake Tahoe area — including Minden, Nev., on Boyd’s Top 50 List (see list).

Looking at the year ahead, it would be no surprise if other automakers — such as Volvo, BMW or Tata Motors’ Jaguar and Land Rover brands — make head office relocation news.

John H. Boyd is the founder and president of The Boyd Co., Inc. Founded in 1975 in Princeton, N.J., The Boyd Co. is celebrating its 40th anniversary in 2015. Site Selection congratulates John and his firm on this milestone. 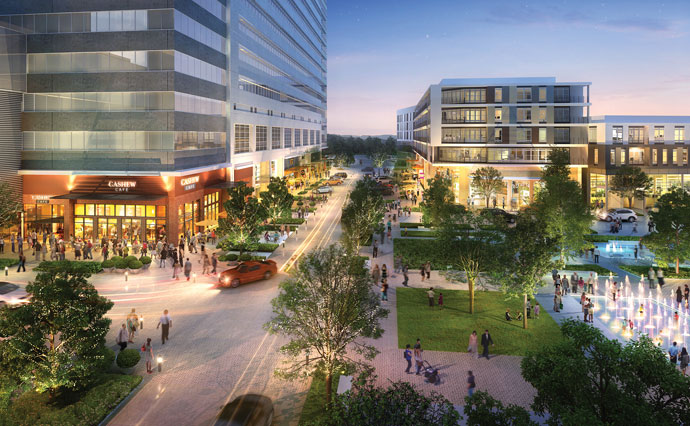 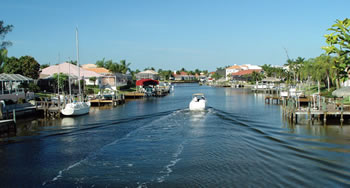 With more than 400 miles of canals, Cape Coral is a boater’s paradise.

If you want to get down to business, the market conditions are right. Contact our Cape Coral Economic Development Office (EDO) for invaluable market demographics, resources and incentives. Why not
get started with your new business destination today? 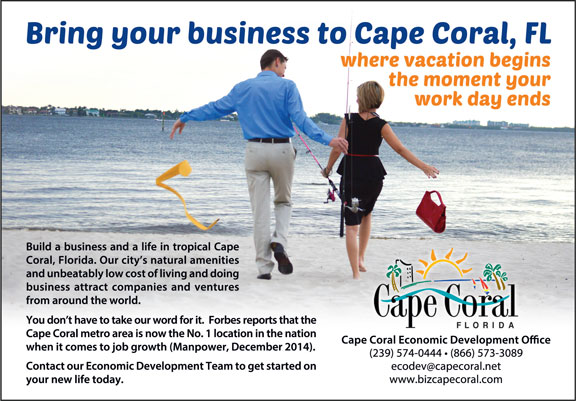 Why is Sandy Springs among the country’s best places to do business? Because other businesses tell us so. Home to more Fortune 500 companies per capita than any U.S. city, Sandy Springs recently welcomed the headquarters of Veritiv and Mercedes Benz, who join UPS, Newell Rubbermaid, AirWatch, Cox Communications, First Data and other great brands that call Sandy Springs their corporate home. Even the New York Stock Exchange, owned by Sandy Springs-based InterContinentalExchange, calls Sandy Springs home!

Besides being a center for big business, the City also hosts a healthy array of mid-size and locally owned small businesses, all enjoying the low tax rate, great public and private schools, and an amazing quality of life. The City utilizes a unique, award-winning service delivery strategy that uses private sector companies to provide municipal services. This approach has kept service costs low enough to enable the City to cap its tax rate.

If local, global or regional access is a priority, Sandy Springs has it! The true geographic center of metro Atlanta, Sandy Springs offers convenient access north, east, south and west. The City is served by five Interstate interchanges on Interstate 285 and Georgia Highway 400, four MARTA rail stations touch Sandy Springs, all with a direct route to Hartsfield-Jackson International Airport. From “Hartsfield,” travelers are within a two-hour flight of 80 percent of the U.S. population and a non-stop flight to and from many international destinations.

LIVE – Sandy Springs is where high quality of life meets reasonable cost of living. First, it is a city in a forest with the largest tree canopy of any major U.S. city. Go up five stories, and you won’t see the city for the trees! Sandy Springs residents enjoy a relaxed lifestyle in a natural setting, while relishing every urban amenity. Whether “rich and single” or ready to retire, media outlets from Forbes to Money to Nerdwallet consistently rank Sandy Springs among the best places to live, work and retire. SafeWise places the City among the safest cities in Georgia. Sandy Springs boasts nationally recognized public schools and top-rated private schools. Since incorporation in 2005, the city of Sandy Springs has opened two new, world-class parks, and it is a mere 15-minute drive to Downtown Atlanta, offering quick access to the metro area’s collection of museums, galleries and other nationally acclaimed attractions.

WORK – More than 3,700 businesses currently call Sandy Springs home.  From internationally renowned corporations, such as Mercedes Benz, First Data and Newell Rubbermaid, to small, family-owned retailers and restaurants, the business community realizes a strong return on investment dollars. There are approximately 93,000 jobs within the City and 93 percent of employees commute into Sandy Springs from other areas of metro Atlanta, indicating the City’s ability to attract talent. More than 37 percent of adults living in Sandy Springs have earned four-year college degrees, with more than 20 percent holding graduate degrees. The City’s excellent location in the Atlanta metropolitan area and strong pool of talent makes Sandy Springs an ideal location for business services and logistics, technology, small businesses, and medical and biotechnology industries.

PLAY – Sandy Springs isn’t all work. More than 300 restaurants highlighting cuisines from every corner of the globe dish up delicious food to residents and guests. Sandy Springs is an outdoor enthusiast’s paradise lined by more than 22 miles of shoreline on the Chattahoochee River, perfect for fly fishing, rafting, canoeing and hiking in areas that feel like wilderness but are just steps from major business centers. Night owls can find their groove at one of the City’s live music, theater and comedy clubs. For major league fans, the new Atlanta Braves stadium currently under construction is a pitch away, within two miles of the City’s border with neighboring Cobb County.

Yet, Sandy Springs is not resting on its laurels. The City is in the midst of a $200M downtown redevelopment project. The new City Center, set to open in 2017, includes a Performing Arts Center, Studio Theatre/Meeting Space, City Green, as well as City Hall, retail and living spaces. Even before breaking ground, the project has sparked significant private investment that is transforming the City’s core retail district into a walkable commercial jewel. Sandy Springs is determined to stay at the cutting edge whether its first-of-its-kind private sector service delivery model or refining and redefining the legendary regional tradition known as “Southern Hospitality.” 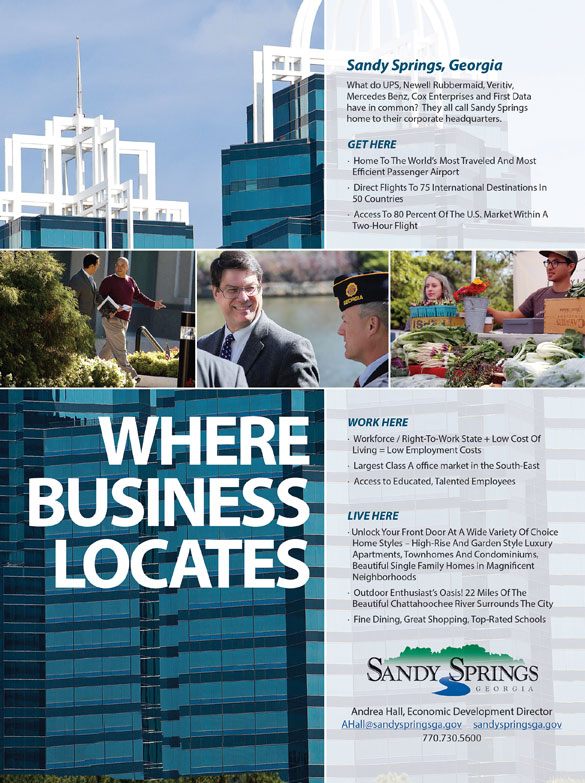