The Quad Cities’ Mississippi River divide is just part of the local landscape, except to Illinois-side economic developers and the capital investors they seek. The latter have a stark choice in which state to operate. 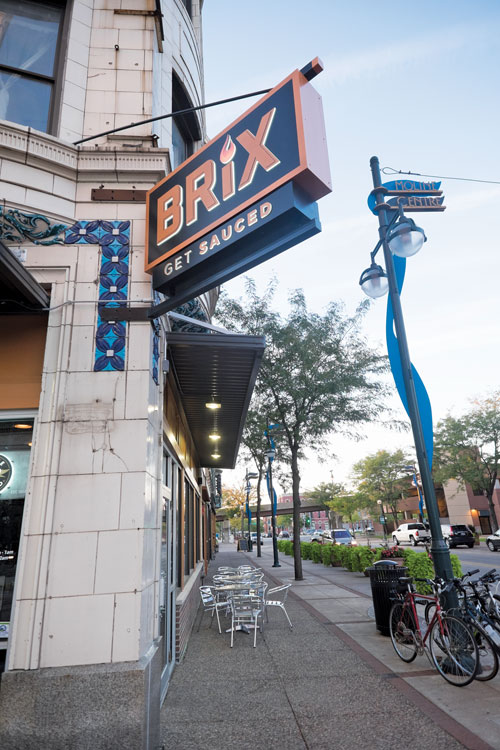 Moline, Ill., on the Mississippi River, is home to Deere & Co. and is part of the Quad Cities metropolitan area, which includes Davenport and Bettendorf, Iowa.
Photo courtesy of Quad Cities Chamber
T

here’s a new sheriff in town, and things are about to change. Gov. Bruce Rauner assumed his Illinois chief executive duties January 12th, and he minced no words in his February 4th State of the State address to legislators in Springfield, most of whom will admit the state business climate is pretty bad. How bad?

“Over the past dozen years, 275,000 more people decided to leave Illinois than chose to come here,” the governor pointed out. “That’s like the cities of Springfield, Decatur and Champaign all completely disappearing. And over that same time period, the states around us have been kicking our tails. The worst performing of our neighboring states has had six and a half times the job growth per 1,000 people as Illinois has had. Iowa’s had more than 15 times the job growth that we’ve had.”

Gov. Rauner says his administration’s top priority is to make Illinois competitive again, to grow more jobs. “To become more competitive we must look to the structural impediments to our economic growth. Our workers’ compensation, unemployment insurance and liability costs all rank among the worst in America. Those costs add up to far more than just numbers on an accountant’s balance sheet.” They are impediments to attracting capital investment and the ensuing jobs.

A 2014 bi-annual ranking of state (and the District of Columbia) workers’ compensation premiums from the Oregon Department of Consumer and Business Services ranks Illinois the 7th highest in the US. Neighboring states: Indiana is 50th — only North Dakota’s rate is lower; Kentucky is 40th; Iowa is 24th; Wisconsin is 22nd; and Missouri is 21st.

Much of the first few weeks of the governor’s administration has been spent listening to the economic development concerns of civic and business leaders around Illinois and getting their reaction to proposals he already has put forth, such as this one in his State of the State address: 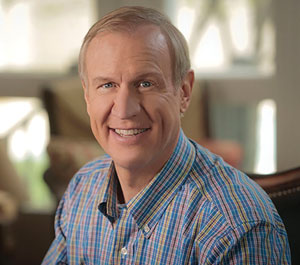 “The states around us have been kicking our tails.”
— Gov. Bruce Rauner, in his February 4th State of the State address

“We must empower voters to decide for themselves whether they want their communities to become employee empowerment zones. These zones will give employees the freedom to choose whether or not they want to join a union. Local communities — local voters — deserve this option so that they can compete with other states and other nations for new businesses and new investment. Employee empowerment zones will increase jobs for residents, increase economic activity for local businesses and generate more tax dollars for local governments. It’s a win-win-win proposal.”

“The Illinois Chamber and the business community it represents should be encouraged by what Gov. Bruce Rauner said in his first State of the State address,” said Todd Maisch, president and CEO of the Illinois Chamber of Commerce. “For example, Rauner identified several pro-business initiatives, such as real workers’ compensation reform and civil justice reform. Businesses need to thrive if we want the state’s economy to improve, so this is good news. The bottom line for state government is fiscal stability.”

A River Runs Through It

One of the new governor’s visits in recent weeks, on a Saturday in February after the State of the State address, was to the Quad Cities Chamber of Commerce, a bi-state chamber that serves the business communities in and around Moline, Ill., and Davenport, Iowa. Meeting attendees liked what they heard. Paul Rumler, the Chamber’s Executive Vice President and Chief Economic Development Officer, shares Todd Maisch’s optimism, predicting in an interview with Site Selection that “Gov. Rauner will focus both parties, the public and private sectors, you name it, on how to make the state of Illinois more competitive, how to make it more attractive to residents and to businesses and on how to make the whole system work again. We know the advantages of Illinois — the global city of Chicago, a tremendous logistics infrastructure and a great workforce. But we don’t talk about that as much because of the longstanding budget issues, pension issues and dysfunction within state government. That’s overshadowed all the reasons why businesses are in Illinois right now.” 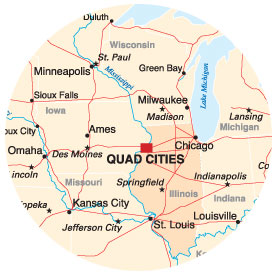 The Quad Cities provides potential investors, and even those already there, with a two-state location option — Illinois or Iowa. “If you asked me which state is better, it all depends on your industry, on whom you’re doing business with and where you’re doing it,” says Rumler. “People are surprised to learn that businesses are not leaving Illinois. They are growing in Illinois right now, and we talk about the reasons why. There are some competitive disadvantages we have in areas like workers’ comp, legal cases, unemployment insurance, but those are the things the governor will be bringing to light and already has. When you talk to the business owners and leaders, they have great confidence in the change in the dialogue and how quickly these areas will be addressed.”

Rumler says so far the legislature seems interested in the measures the governor is proposing to make Illinois more competitive. “They’re not running away from the topic. They are seeking more information and figuring out where they can make an impact. That was the topic of our discussion with the governor this past weekend — where can we make the most immediate impact? Let’s fix what’s wrong using common sense, and let’s get Illinois booming again. That’s the governor’s favorite quote right now — ‘Let’s get Illinois booming again.’ It’s successful and people like it here, but let’s get it booming again.”

Will the local right-to-work zones proposal see the light of day?

“Local right-to-work laws is an area we’re looking for more information on. I haven’t seen it implemented anywhere else. I think he’s putting a lot of topics on the table for discussion that have not been discussed in Illinois in quite some time. We’re seeing an entry point to that discussion, and I think there will be a lot of dialogue in the future on that topic. Each day he’s offering some new thoughts on what could be done. Our challenge is where should the political capital be spent? What will have the greatest impact on current and future businesses? And I think we’ll see the legislature and the governor rally around some of those causes.”

It may not happen soon, but Rumler says the issue definitely has legs, if only for the state’s geographic circumstances. “I can see the governor continuing to go down that path. He’s said his mentors are the governors of Indiana, Wisconsin and Michigan, among others. We know what’s happened in those states, Michigan most recently going right-to-work. This will not be a flash in the pan idea, but one that will be debated over the next year or so.”

Should I Stay or Should I Go?

Illinois or Iowa? That’s a conundrum at the heart of Aaron Tennant’s business-planning process. His trucking company has been based in the Quad Cities — on the Illinois side — since his grandfather founded Tennant Truck Lines in 1946; the company employs more than 280 there. It wouldn’t take much to pull up stakes and move to the Iowa side of the border. Few if any workers would be significantly affected. In fact, Tennant almost did just that. 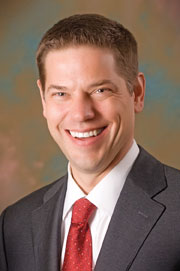 “We came to a crossroads in 2011 and needed to expand, and we chose to stay in Illinois and fight out the tough climate at that time,” says Tennant, who is building a new facility at mile marker nine on Interstate 80 — just nine miles from the border with Iowa. “By choosing to stay and fight the climate, I specifically am referring to workers’ comp. At that time, with base rate workers’ comp, we could have saved about $450,000 by building our facility in the state of Iowa. To me, that’s the same as buying four more trucks and creating five more jobs. But we chose to stay in Illinois.”

Meanwhile, Tennant says his company has been declined workers’ comp coverage by carriers who won’t even provide a quote, “because we’re based in Illinois and we’re an open deck trucking company.” Fast forward to 2015, and Tennant says he’s starting to see light at the end of the tunnel.

“The choice we made to stay was the right one, because Governor Rauner has vowed to reform workers’ comp and I think will make some real headway there. I don’t know if we’ll get to where Iowa is next door, but if we can level that playing field so I am competitive with all my competitors across the river, that will help a lot. More than anything, I want to see manufacturing come to the Quad Cities, because that gives me product to haul.”

Tennant and Paul Rumler contend that a big part of the next year will need to be spent convincing the governor’s political opponents — Democrats — that serious work needs to be done to fix the state’s business climate. In 2013, Tennant was testifying at a committee hearing in Springfield about the dire workers’ comp situation, and certain committee members up and left the room during his testimony. “They didn’t want to hear about that,” says Tennant. “So there is a challenge, but the governor’s position is strong, and he’s going to do the right thing for Illinois rather than for Springfield or the political machine. He told us here on Saturday that today, we’re not even on the list,” says Tennant. “All he wants to do is get us on the list. Fixing workers’ comp will be one of the things that gets us on the list.”

On a scale of 1 to 10, how confident is Tennant that the governor can give the business community the optimism it needs to invest and expand in Illinois in the years ahead, where 10 is highly confident? “I’ll go with an 8.1,” says Tennant. “He’ll have some opposition, and frankly he’s dropping some grenades that are getting some attention right now, but I think he’ll move forward on a few of the common sense measures that are hard to argue with, and he’ll sell the reasons and issues behind why we need to reform things like workers’ comp to get us on the list.”