According to these referrals, Indy comes highly recommended. 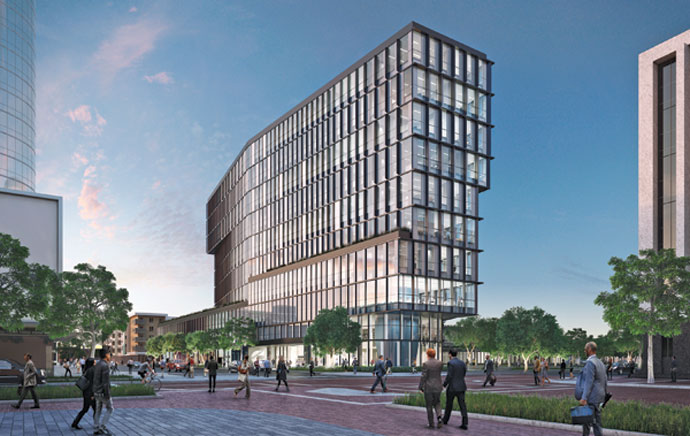 The distribution business of Columbus, Ind.-based Cummins Inc. will soon occupy a new headquarters in downtown Indianapolis, on part of the land that was previously home to Market Square Arena.
Artist’s rendering courtesy of Deborah Berke Partners
by ADAM BRUNS

(On March 28, Angie’s List CEO Bill Oesterle announced that the company would pull out of its planned 1,000-job HQ expansion in Indianapolis (discussed below) due to the signing into law by Gov. Mike Pence of the Religious Freedom Restoration Act. The potential consequences of such laws in various states (including Indiana) were explored in the July 2014 Site Selection article "Regardless of One’s Politics." —Ed.)

The headlines are littered with tales of stadium boondoggles. But how often do you see downtown properties evolving from athletic endeavors to prowess in the business marketplace?

It’s happening in downtown Indianapolis, where Cummins and others are establishing major operations on property that was once home to Market Square Arena, where the Indiana Pacers once played. That structure was razed 14 years ago. But buildings now rising on its site are raising hopes for downtown Indy.

Cummins, headquartered in Columbus, Ind., for the past 95 years, announced in March 2014 plans to build a new Indianapolis office for its distribution business on four acres (1.6 hectares) in the Market East cultural district that previously housed a portion of Market Square Arena, and expects to break ground in early 2015 and open in late 2016. Cummins’ Distribution Business, one of the company’s four business units, sells the full range of Cummins products for more than 20 application segments in more than 190 countries around the world.

“Cummins is a successful, global company with a long history of working to make the communities where it operates stronger and more vibrant,” said Maggie Lewis, president, Indianapolis City-County Council, when an architecture competition for the project was announced. “I am pleased Cummins will continue to make my hometown of Columbus its global headquarters, but I am thrilled they are expanding in downtown Indianapolis and bringing their commitment to community and legacy of wonderful architecture to the great city where I live, work and call home.”

The architecture competition winner was New York–based Deborah Berke Partners. RATIO Architects, Inc., is the local architect of record, and Wilhelm Construction was selected by Cummins as the construction manager.

“Cummins has a rich history as a patron of architecture, not only in Columbus, Indiana — a city with one of the greatest collections of significant architecture in the United States — but also around the world,” said Deborah Berke in September 2014. “We are honored to continue this legacy in Indianapolis as we collaborate on the creation of the company’s new distribution business headquarters, which will be a 21st century approach to the workplace and will have a strong connection to the surrounding neighborhood.”

That vision was unveiled in December 2014 before the City of Indianapolis Metropolitan Development Commission. It includes a 10-story office tower, retail and significant green space that borders the city’s Cultural Trail that runs along the property’s west side. “This project raises the bar for architecture in Indy and will stand as a bold and visually compelling gateway into the city,” said Mayor Ballard. The planned workspace places a premium on abundant views, natural light and flexibility.

“I am confident this space will create a dynamic place to work for our employees and customers, while contributing to the city’s landscape,” said Tom Linebarger, Cummins chairman and CEO.

Welcome to the Neighborhood ... Again

A Ford steering plant in a run-down area of the Near Eastside was closed about six years ago. But it too is seeing potential redevelopment as the chosen site for a new headquarters from Indianapolis-born-and-bred Angie’s List, which first moved into that area of town in 1999, helping spark rejuvenation of the Holy Cross neighborhood.

The proverbial source for local service provider recommendations, Angie’s List in October 2014 made the ultimate recommendation for its hometown, as company officials announced their intent to grow to 2,800 employees by 2019, and in the shorter term add 1,000 people to the payroll of 800. The company only employed 500 at its HQ as recently as 2011, when the company last expanded and sought tax-increment financing arrangement with the city. 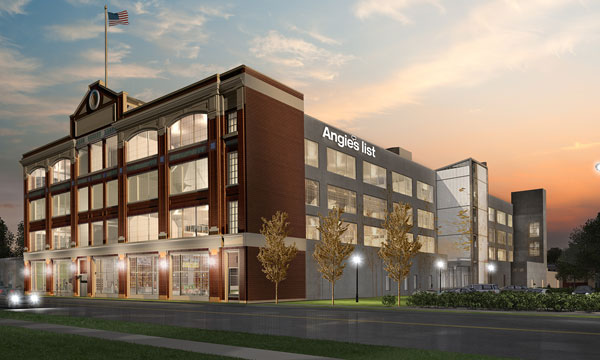 A new headquarters proposal from Angie’s List aims to add 1,000 jobs in Indianapolis and redevelop a former Ford factory on the city’s struggling Near Eastside. The company will learn in March whether the city-county council approves an $18.5-million incentive package.
Rendering courtesy of Angie’s List

It’s seeking that kind of help again. In late February it took one big step toward getting it, as the Metropolitan and Economic Development Committee of the Indianapolis City-County Council voted to send an $18-5-million tax incentive package on to the full Council for a vote in March. The package includes $9.6 million for a parking garage and street improvements, plus $6.75 million to relocate an Indianapolis Public Schools warehouse from the former Ford building. As part of the incentive plan, Angie’s List has agreed to achieve certain business and financial targets including annual investment, number of employees and average wage levels.

The company plans to begin hiring in 2015 for positions including IT, sales and member services. Angie’s List expects to invest more than $10 million in expansion-related capital expenditures in 2015, with cumulative investment expected to be approximately $40 million by the end of 2019.

What Would Elvis Do?

Though the agreement going before the full City Council has partial clawbacks in case Angie’s List doesn’t meet its hiring targets, some on the Council were concerned about setting precedent. That concern, if not misplaced, might at least be tardy. In March 2014, the full Council approved up to $23 million in financing for a more speculative but equally optimistic investment: the 28-story Market Square Tower apartment building, to be located where Market Square Arena once stood.

The same site where the NBA’s Pacers played for 25 years and where Elvis Presley performed for the final time in 1977 will now be devoted to a luxury setting even they might not recognize. Among the amenities to be offered at the tower, being developed by Flaherty & Collins Properties, are a resort-style heated saltwater pool with sundeck and cabanas; an elevated bark park with pet grooming area; an outdoor kitchen, fireside lounge and grilling areas; a resident lounge and clubroom with billiards; wine storage; electric car charging stations; secured bike storage and a bike repair shop. Oh, and a Whole Foods Market downstairs.

In other words: a high-rise castle fit for the King, with high-end organic peanut butter to boot.

“We have finalized the financial aspects of the project and are thrilled to break ground on what will be one of the finest mixed-use high rise multifamily towers in the country,” said David Flaherty, CEO of Flaherty & Collins Properties. “This project means a great deal to the future residents of downtown Indianapolis and the vision for a walkable, bikeable and connected downtown. We are excited to get started.”

In June 2014 the company began construction of a global technical center office for its High-Horsepower Engine Business in Seymour, co-located within the Seymour Engine Plant in close proximity to 22 test cells dedicated to engine research and development work for mining, rail, oil and gas, marine, power generation and industrial applications. The new technical center brings together all of Cummins high-horsepower engineers from several locations in Indiana into a single facility together with newly recruited employees.

“The completion of the new office building for the high-horsepower technical center will represent an important step forward in the transformation of the Seymour site to an industry-leading facility for engine design, testing and manufacturing with world-class credentials,” said Ed Pence, Vice President and General Manager – Cummins High-Horsepower Engine Business.

The technical center and the ongoing expansion of the manufacturing plant at the Cummins Seymour facility represent an investment of over $250 million continuing through 2015. The new office building is expected to be ready by August 2015 to accommodate over 600 highly specialized engineers and technicians, who will maintain a close connection to other high-horsepower engineering sites Cummins operates in the US, the UK, China and India.

In addition to other automotive expansions now underway in Princeton by Toyota and in Michigan City by KTR, Mercedes-Benz in January announced a new partnership with the plant that made its name manufacturing the Hummer. 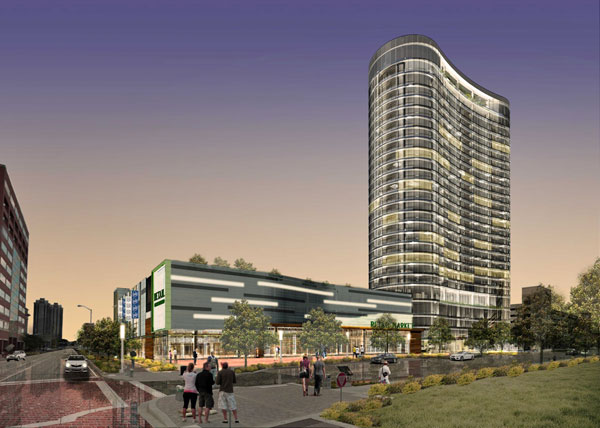 You read that right: US contract manufacturer AM General, known for designing and making the Humvee and Hummer and located in the South Bend municipality of Mishawaka, will produce the R-Class luxury SUV for Mercedes-Benz, as the company frees up capacity at its plant in Tuscaloosa, Ala., for manufacturing the M-Class, the GL-Class and the new GLE Coupé due in summer.

The Mercedes-Benz R-Class has been offered exclusively in China since 2013. Under the multi-year agreement, AM General becomes Mercedes-Benz’s first and only contract manufacturing operator in the US. AM General anticipates R-Class vehicles will start rolling off its production lines this summer and will hire and train hundreds of new workers in order to prepare for R-class production. AM General, through its subsidiary Mobility Ventures LLC, also designs, produces and supports the new MV-1 — “the world’s first purpose-built, universally accessible vehicle which is expanding choice in transportation for families, livery and paratransit fleets.”

“AM General is pleased to have been selected by Mercedes-Benz to build this vehicle at our world-class commercial vehicle facility in Mishawaka,” said Charlie Hall, president and CEO of AM General. “We look forward to a long-term relationship with Mercedes and expanding our services to the US and global auto industry.