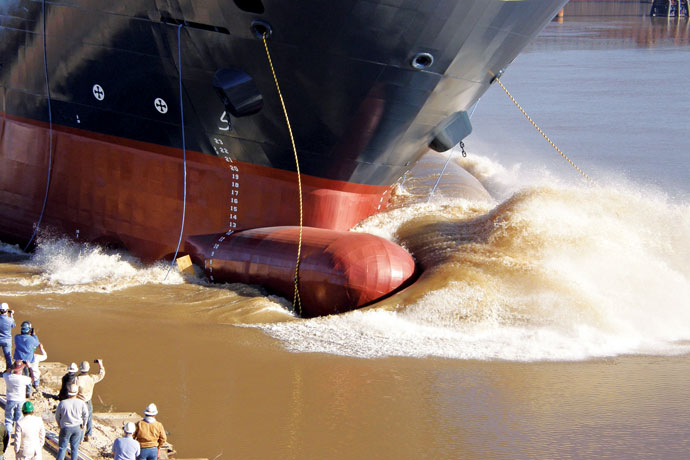 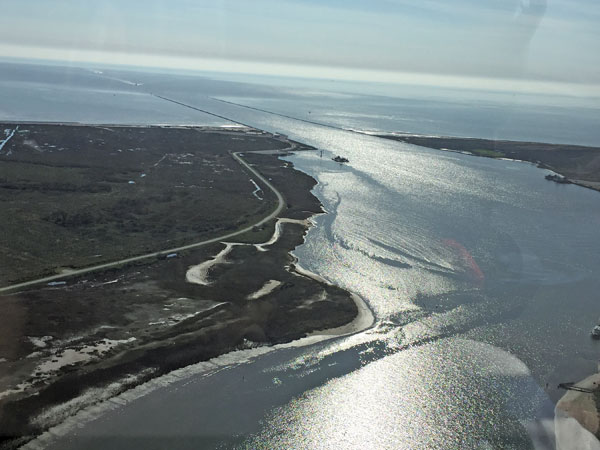 The Calcasieu Ship Channel is the lifeblood of commerce in Southwest Louisiana, connecting the Port of Lake Charles to the Gulf of Mexico.
Photo courtesy of Cameron Parish Police Jury

hen your region already leads the US in total capital investment into new industrial construction, what do you do for an encore?

In the greater Lake Charles area known as Southwest Louisiana, an additional $2 billion in capital investment was announced in February, bringing to $85 billion the total investment into capital projects that are either announced or underway in the five-parish region.

To put that figure into perspective, there is not another US state that can claim that much industrial development — and Southwest Louisiana is doing that in an area of 296,192 people.

George Swift, president and CEO of the Southwest Louisiana Economic Development Alliance, says the region has only begun to see the effects of this new wave of development.

“With the unprecedented growth in our five-parish area, there will be opportunities for additional industries, support companies, retail and service businesses, and residential development in the more rural areas surrounding Lake Charles,” says Swift. “While most of the projects are in Calcasieu and Cameron parishes, Allen, Beauregard and Jeff Davis Parishes offer available land, a workforce and great quality-of-life residential areas.”

The latest big project was announced Feb. 3, when Live Oak LNG said it would invest $2 billion to develop a liquefaction facility and liquefied natural gas export terminal near Lake Charles. The plant will be built on the Calcasieu Ship Channel, which connects Lake Charles to the Gulf of Mexico.

“We are sitting on the best water supply in the Southern United States.” — DeRidder Mayor Ron Roberts

A subsidiary of Houston-based Parallax Energy, Live Oak LNG is expected to create 100 direct jobs at the liquefaction and export facility at an average annual salary of $75,000 plus benefits. Louisiana Economic Development estimates the project will create 385 indirect jobs in Calcasieu Parish and the surrounding region. Some 1,000 construction workers will be employed at the peak of the building phase.

“We selected a site of 350 acres of land in Calcasieu Parish, on the west bank of the Calcasieu River near Lake Charles,” says Simon Bonini, CEO of Live Oak LNG. “It is zoned for industrial use and is exceptionally well positioned in close proximity to substantial gas pipeline infrastructure and great marine access.”

Bonini says his firm’s history of doing business in Louisiana made the site an easy choice. “We chose this site because we know what it is like to work in the state of Louisiana,” he notes. “Louisiana provides knowledgeable agencies, it offers industry-specific economic incentives, and it has a skilled labor pool. We have already received tremendous support from the Governor’s Office, LED, Southwest Louisiana EDA, Port of Lake Charles and American Bureau of Shipping, and want to work hand in hand toward completion of Live Oak LNG. Many of us have worked in Lake Charles before. We are very pleased to be back in the community and to be able to provide jobs in support of Louisiana’s robust economy.”

The next step is for Live Oak to begin the federal permitting process. Once permits are secured from the Federal Energy Regulatory Commission, expected by late 2016, construction will begin. The plant is slated to begin operations in late 2019.

Energy plants aren’t the only projects dotting the regional landscape, however. Around Southwest Louisiana, manufacturing plants and commercial real estate investments are taking shape as well. 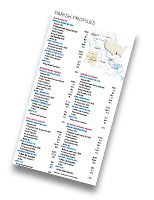 In Allen Parish, the Seven Clans Hotel at Coushatta recently was completed at an investment of $60 million. The project generated 1,000 construction jobs and 150 permanent positions.

In Beauregard Parish, Packaging Inc. of America (Boise) has begun construction on an $111-million plant that retains 440 jobs and creates 54 positions along with 600 construction jobs.

In Cameron Parish, Waller Point Marine LNG Terminal is a $200-million investment and Cameron Fisheries Facility is a $4.7-million project.

In Jeff Davis Parish, BP Biofuels was a $400-million investment that created 88 permanent direct jobs and 284 indirect jobs. Also completed in the parish were a $5.65-million project by Louisiana Spirits; a $4-million expansion by Zagis USA into a new cotton-spinning mill; and a $4-million South Louisiana Rail Loading Facility.

Marion Fox, economic development director for Jeff Davis Parish, says these are heady days for the once-sleepy parish that rests on the Interstate 10 corridor.

It’s resting no more, she notes. “Metalplate Galvanizing will be a $10-million new plant announcement on Highway 90 between Jennings and Roanoke at Farm Supply Road,” Fox says. “MPG will employ about 100 workers. It will be about 20 percent bigger than the plant MPG operates in Houston.”

Porocell, meanwhile, is a $2-million plant that will employ 15 workers at a site just south of Lacassine Industrial Park in Jeff Davis Parish. “They make catalysts for the plants in Lake Charles and they are expanding,” says Fox. “The South Louisiana Rail Loading Facility at Lacassine is shipping rice to Mexico as we speak. This is proof that you can ship directly to Mexico from right here. And the LEEVAC Shipyards just launched their newest ship — an offshore supply vessel,” Fox says. “Oil and gas may be slowing down now, but in the long run it will not affect us.”

Trey Litel, president of Louisiana Spirits LLC, saw his company add not only 20 workers to the parish last year, but also 30,000 tourists who came through his operation. The distillery that makes Bayou Rum has quickly become one of the top tourist attractions in the region.

“We capture many of the visitors who are driving along the I-10 corridor,” Litel says. “Many people who live here are coming to see us and they are bringing their out-of-town friends.”

Litel says his firm chose Lacassine because “we wanted to be easily accessible to Interstate 10. We needed at least 22 acres to accommodate our expansion plans. We needed natural gas, electricity and water. We tap into the Thornwell Aquifer to get our freshwater and that is very important to the product we make — rum.”

He adds that “it was affordable to buy land here. We received a good introduction to the owner of the property through the work of Marion Fox. And there were some state programs we took advantage of, such as LED FastStart and others.”

Louisiana is known for producing world-class sugarcane, he adds. “Farms and plantations have grown sugarcane here since 1750,” Litel says. “There had not been a world-class rum to go along with this sugarcane, and that is the opportunity we see. People are excited about our rum.”

In Beauregard Parish, DeRidder Mayor Ron Roberts says that liquid of another variety — water — will be the driving source behind his parish’s economic future. “If there is one thing we have, it is water and plenty of it,” he says. “A 1,000-year drought is being predicted for the American Southwest, and we are sitting on the best water supply in the Southern United States.”

Manufacturers who need water will also be attracted to a new 1,400-acre industrial park at the Beauregard Parish Airport, the mayor says. “This will be the largest available industrial park in the state. It is on US Highway 190 at an airport with a 5,400-foot runway. It is an excellent location that is roughly in the middle of Houston and New Orleans, with great access to I-10.”

Roberts notes that “MeadWestvaco just completed a $30-million expansion, and Amerisafe Inc., a national company headquartered in DeRidder, just went over a billion dollars in assets last year. All of our industries are running at full capacity.” 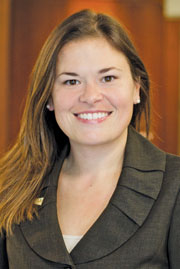 Roberts calls Beauregard Parish “the best-kept secret in Louisiana. We are three hours from Houston, four hours from New Orleans, and just 70 miles from the Gulf of Mexico. We have good schools, good hunting and fishing, and a lot of cultural amenities that you don’t find in other places. We have just about anything you could want here in DeRidder and Beauregard Parish.”

Clair Hebert Marceaux, economic development director for Cameron Parish, says the rapidly expanding energy sector is growing the job base in Cameron substantially. “We have full support from our LNG exporters to develop our workforce in Cameron,” she says. “Chicago Bridge & Iron and Sempra LNG are creating scholarships at the local community college. They are implementing programs they have done in other parts of the country. Once these students earn a certificate, they are guaranteed a job.”

The $22 billion in combined investments by Cheniere LNG and Cameron LNG are transformational for the parish. “We have 6,841 residents (2015 estimate) in 1,900 square miles. We are the largest parish in Louisiana in land mass and second smallest in population,” Hebert Marceaux says. “We are very remote here, but we are ripe for every kind of project — hotels, motels, even tourism.”

A case in point: 140,000 birders visited Cameron Parish last year. For a parish that had to replace 98 percent of its housing stock following 2005’s Hurricane Rita, that is quite a comeback.

“I recently got to show the CEO of the Panama Canal what I believe is going to be the LNG capital of the world: Cheniere and Sempra,” she says. “The opportunity for economic development here is extraordinary. It is like drinking from a fire hose.”