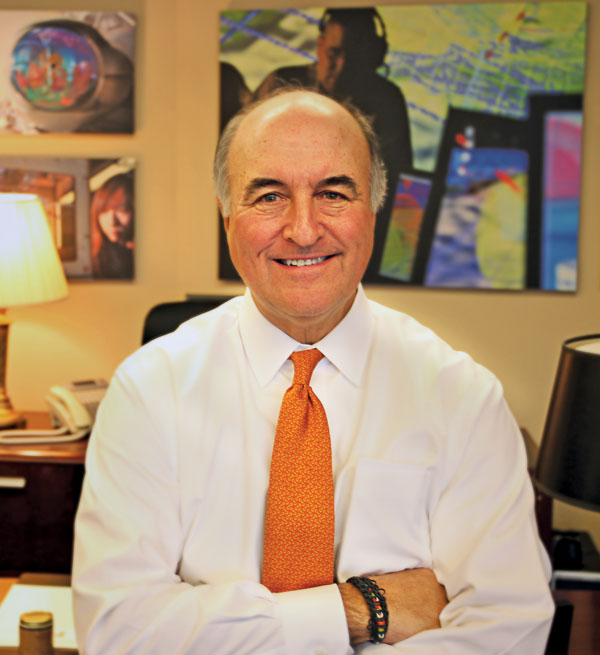 How Secretary Mike Gill, Maryland’s new head of Business and Economic Development, is making his office a business ally.

Though Maryland enjoys a reputation for its excellent, well-educated workforce and access to premier institutions of higher education, the state’s tax policy is viewed as less than business friendly. According to the Tax Foundation’s 2015 State Business Climate index, Maryland is ranked 40th based on corporate, individual income, sales and unemployment insurance taxes, and taxes on residential and commercial property. There’s also talk of better aligning the state’s Department of Business and Economic Development (DBED) with the needs of the business community.

Enter the new regime. Soon after Governor Larry Hogan was elected, he announced that businessman Mike Gill would lead DBED. According to Hogan, Gill’s long career in the private sector — from building a wireless company to serving as chairman and a principal at investment bank Evergreen Advisors, LLC — was a chief reason for the selection. “I’ve been a pretty vocal advocate out there talking about the need for a renewed focus on economic development and a need to grow the private sector,” Hogan said. “I believe Mike is the right man.”

A lifelong Marylander, Gill spoke frankly with Site Selection about what the state needs to do to attract and retain business, starting with his own department.

Site Selection: You have worked in the private sector for most of your career. What excited you most about taking this job?

Secretary Gill: The man who got elected to be the CEO of the state, Governor Larry Hogan. If not for him and his view of the world, his pragmatism and belief that business can make a difference in all society, I probably would have continued doing what I was doing. The state of Maryland had a lot to do with it. I’m a Marylander, always have been, anticipate always will be. I’ve got seven little grandchildren. I want to make sure this state stays competitive for them. The third part is that I’m a sucker for a challenge, and with all challenges there are opportunities.

SS: What are the challenges?

“Businesses in Maryland have gotten to the point where they just don’t want government in their way.”
— Mike Gill, Secretary of Maryland’s Department of Business and Economic Development

Sec. Gill: I really believe the government forgot who their customer was. There are about 65,000 state employees and there are 6 million residents. Those 6 million residents are not here to serve the 65,000 government employees. One of our challenges is that we have to turn that around. We’re here to serve those 6 million customers. Tens of thousands of those people are proprietors of businesses. That’s our mission — working hard to understand the needs of those businesses and then being there with ideas and solutions to help them be successful. Another challenge is that gradually over the last couple of decades the trajectory of government proactively supporting and identifying the importance of business has dropped. We’ve got to change that.

SS: Are you looking to change the culture?

I’ve talked to delegates from all over the state, and we’re a state that has 24 jurisdictions including Baltimore city. Everyone knows about Mongomery County as the home of life sciences and cool bio and pharma stuff. We know that Prince George’s County has a lot of cool assets like College Park and the National Harbor, but people tend to forget we have a lot of counties that aren’t very large, don’t have large populations or high per-capita incomes. These counties thrive on agriculture and tourism; every now and then they’re fortunate enough to have an employer with several hundred quality jobs.

The culture is making sure, from a retention standpoint — whether a big county or one of the smaller guys — that we are working our backside off, making sure we know what’s going on in their county, working with their economic development people and doing everything we can to help them be successful. We also talk about collaboration, not just with local economic development groups but higher education, because higher ed is an economic development engine. By working more closely with them, we’re going to get better. We’re trying really hard to make these things second nature inside our department and outside these four walls.

SS: Your mention of business retention brings to mind McCormick, the large Maryland company that announced in 2014 they would be shopping around for a new headquarters location.

Sec. Gill: I’m a Baltimore kid. I grew up with McCormick. When I worked for IBM, my first job was the IBM sales rep for McCormick. It’s a great company with high integrity. When they made the decision a couple years ago that they needed to bring together the various groups that were spread out over the north side of town, they used it as an opportunity to ask, “Is this the best place for our enterprise for the next 125 years?” That was the question they wanted answered.

I’ve believed all along that McCormick’s first choice is to be in Maryland. At the same time I think they’ve made us, as a state and as an organization, look in the mirror to ask whether we’re doing all we can do, not just as it relates to incentives, but as it relates to regulatory issues, and our responsiveness to understanding strategically what is important to McCormick to make sure we’re delivering on those goods. I think they want to know that the business environment, not just now but going forward, will be one that’s positive and supportive. Though they haven’t made a final decision, we are working closely with them. I’m encouraged, I’m confident, but I’m not cocky. It’s been a learning opportunity for everyone, with a company like McCormick, to listen and then be reactive to what they say is important to them.

“I really do see the glass of water as half full, relative to our state and our potential.”
— Mike Gill, Secretary of Maryland’s Department of Business and Economic Development

SS: What are the top three priorities for the DEBD? How do you propose to implement them?

Sec. Gill: I’m really serious about the customer retention issue. If you intensely focus on it, not only should you significantly improve whatever your retention ratio is, there will be hundreds of businesses that will find ways to help them grow.

Secondly, [the concept of] “One Maryland.” That means whether you have a small farm in Somerset County and you can’t afford for the weather to be bad and irrigation is important to you, or you’re a bio company in Frederick with 1,500 employees with high-paying jobs and you’re changing the world through your discovery, we need to make sure that we really do become great listeners and we help people to be successful. We help businesses solve problems; that’s what we’re supposed to do at DBED.

Finally we want to move the chains. We’re projecting about $16.4 billion in revenue in Maryland this year. What we do at our department, even though we’re small, can influence very significantly that revenue number if we’re firing on all cylinders and creating a culture where businesses want to be here and are excited to be here and they grow.

We have to work hard, work our backsides off, to diversify the business mix. We got real lazy over the last decade. We thought all we had to do was accept all the additional federal government jobs that came our way and that would take care of everything. Then, lo and behold, though sequestration and cutbacks, we lost jobs, and instead of just getting a cold, we got pneumonia. We can’t ever let that happen again.

SS: Is there an emerging sector or industry that you’re looking to develop or encourage?

Sec. Gill: This might be a little cheesy but I mentioned the seven little grandchildren earlier. They’re all unique. I compare the emphasis on industries to those seven grandkids. They each have their unique skills and qualities. They’re all important and we want to make sure that to whatever level those industries want to grow and prosper, we’re helping them.

Sitting on my desk is an hourglass. I tell folks the hourglass can either be your ally or your enemy depending on how you use it. I feel like we’re on the clock, especially as it relates to the things we’ve discussed. I don’t look at this as a four-year or eight-year project. I look at it today. Are we doing all the things we possibly can right now, today, to move the chains faster than whatever pace they’ve been moving? We need to focus on speed — and try not to break anything. 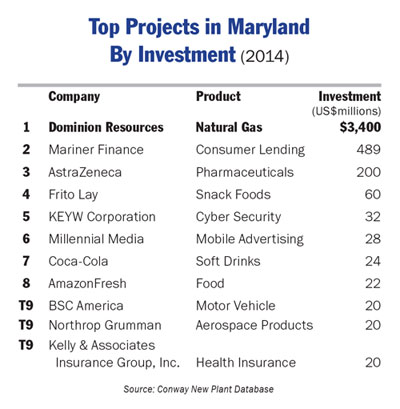 Construction began on a massive liquefied natural gas project last October in Calvert County, on the western shore of the Chesapeake Bay. The Cove Point Liquefied Natural Gas Export (LNG) project is being built by Richmond, Va.-based energy company Dominion Resources. At a cost of between $3.4 billion and $3.8 billion, it is one of the largest private investments ever in Maryland, and the state’s top project in 2014 by investment in Conway’s New Plant Database.

“The Cove Point facility has been on the western shore of the Chesapeake Bay as an LNG import terminal for nearly 40 years,” said Diane Leopold, president of Dominion Energy’s business unit. “While we are making a substantial investment to add export capabilities, we intend to keep unchanged our commitment to being a good neighbor and responsible steward of the environment.”

The project underwent a three-year regulatory review and approval process to determine it met safety, environmental and other requirements. The export facility will remain within the existing 131-acre (53-hectare) LNG terminal site and provide employment for thousands of skilled construction workers before creating 75 permanent jobs.

Cove Point is the closest export terminal to the Marcellus Shale, the nation’s most productive natural gas deposit. Dominion already has 20-year contracts with Japan’s Sumitomo Corporation and Gail India Ltd., in New Delhi. The facility is expected to begin operations in late 2017.