By several measures, Minnesota’s economy is firing on all cylinders.

Medical device companies are bursting at the seams in the Twin Cities region, with two announcing new headquarters projects in recent months. Smiths Medical is moving to a new facility in Plymouth from its existing quarters in Arden Hills. The company wants its corporate headquarters and non-manufacturing staff in one location. “The new facility will allow us to create a modern and engaging work environment, while the decision to consolidate in the Twin Cities allows us to capitalize on the great talent and business environment in the region,” said Jeff McCaulley, president and CEO, at the December 2014 project announcement.

Cardiovascular Systems, Inc., is building a new, 125,000-sq.-ft. (11,600-sq.-m.) headquarters facility in New Brighton with space for 500 employees. “We’re fortunate to have found a location that allows us to remain in New Brighton — a community we have called home and supported since 2005 — while continuing to expand and prosper as an organization,” noted David L. Martin, president and CEO in June 2014.

Expanding companies like these are, in part, why the North Star State’s labor market is so strong. Minnesota has the fifth-lowest unemployment rate in the US, at 3.6 percent. Only the Dakotas, Nebraska and Utah report lower rates. Over the past year, nine of 11 Minnesota industry sectors have gained jobs: professional and business services (up 11,995), education and health services (up 8,910), manufacturing (up 7,589), leisure and hospitality (up 4,891), trade, transportation and utilities (up 1,329), logging and mining (up 648), other services (up 480), government (up 140) and construction (up 127). Sectors that lost jobs over the past 12 months were financial activities (down 2,503) and information (down 206).

Pockets of Minnesota have even lower unemployment rates. St. Cloud reported a jobless rate of just 3.3 percent in November 2014, thanks in part to a partnership between the St. Cloud Technical and Community College and companies growing their workforces. The state’s Department of Employment and Economic Development (DEED) administers a Job Skills Partnership Program that funds the workforce training needs of companies like Columbia Gear Corp., New Flyer of America, Talon Innovations and WFSI. These companies worked with the college to apply for the training funds and were awarded $1.3 million cumulatively in the past two years, resulting in training for almost 1,000 workers.

Statewide, the Minnesota Job Skills Partnership has funded 53 training projects through postsecondary training institutions with more than $8.3 million in state funds. According to DEED, these projects leveraged $19.8 million in matching funds from the businesses, and $1.4 million from the educational institutions. The grants will assist 68 businesses and are expected to train 11,946 workers.

Manufacturers Are Bullish on 2015

More than 90 percent of Minnesota manufacturers say they expect production and employment levels to increase or stay the same — up more than 10 percent from 2014 for both indicators — according to a survey by DEED and the Federal Reserve Bank of Minneapolis.

In the random survey of Minnesota manufacturers conducted in November, 52 percent of those that responded expect orders to grow in 2015 and 42 percent expect to hire more workers.

“Based on the results of the annual Manufacturing Business Conditions Survey, manufacturers have a positive outlook for their industry and for the state’s economy in 2015,” said DEED Commissioner Katie Clark Sieben. “In terms of new jobs, Minnesota’s manufacturing industry is growing at more than double the national pace, and the continued positive expectations from industry leaders reflect added confidence for the coming year.”

Among other findings in the survey:

Manufacturers were also optimistic about the outlook for the overall state economy in 2015. The survey showed that manufacturers were more optimistic than a year ago about overall corporate profits, economic growth, consumer spending, business investments and employment. 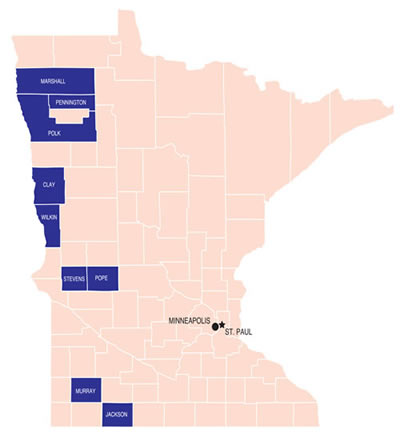 Only Texas and North Dakota have more counties that have recovered from the recession than Minnesota, according to a recent report from the National Association of Counties (NACO). And those two states have an energy industry boom to thank for much of their economic growth. Minnesota’s nine counties (see map) are not even in the Twin Cities region. They are Clay, Marshall, Pennington and Polk in the northwest; Pope, Stevens and Wilkin in the west-central part of the state; and Jackson and Murray in the southwest. NACO’s analysis measures county economic recovery based on jobs, unemployment rate, economic output and home prices.

“The National Association of Counties study shows counties in Greater Minnesota are on the front end of the economic recovery,” said Dept. of Employment Economic Development Commissioner Katie Clark Sieben on January 15th. “While Minnesota ranks third nationally for the number of recovered counties, we must continue to focus on growing jobs and increasing economic opportunity for all of Minnesota.”