Dyersburg and its Mid-South brethren top the charts. 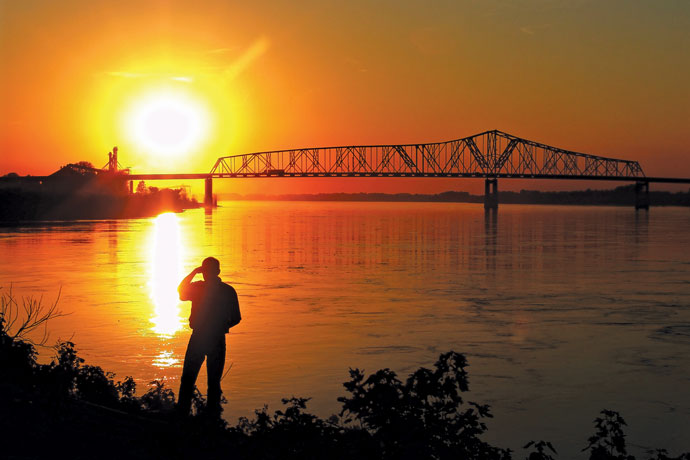 Constructed in the early 1970s, the Mississippi River Bridge on I-155 connects Dyer County, Tenn., to Missouri and I-55. “That bridge in and of itself has been a key driver of industry choosing to locate in Dyersburg,” says Allen Hester.
Photo courtesy of Dyersburg/Dyer County Chamber of Commerce
by ADAM BRUNS
T

he towns of Dyersburg, Newbern and Trimble in Dyer County, Tenn., have produced a lot of goods in their history, from Sylvania flash bulbs in the 1970s to utility transformers from Ermco today. Royal Building Products has moved from vinyl siding to large-diameter PVC pipes for all the water and sewer lines needing replacement across the country. One homegrown company, Rough Country, makes lift kits for pickup trucks in a factory where Honeywell once made air purifiers and then Briggs and Stratton made lawnmowers. Another firm headquartered here, Boss Hoss, makes motorcycles powered by V-8 engines.

The Big Muddy Cup is awarded based on corporate facility investment project activity tracked by Site Selection’s New Plant Database for the 18 months from July 1, 2013, through Dec. 31, 2014. Projects must fulfill one of the following three conditions: at least $1 million invested; at least 20 new jobs created; or at lease 25,000 new sq. ft. of constructed space. Below are the top 10 metro areas for per-capita project activity along the river for the examined time period, and the top five areas according to total projects tallied. 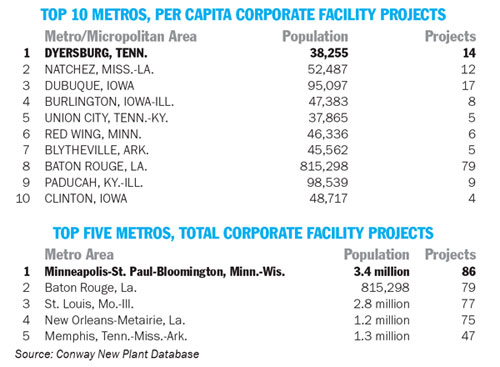 “There’s a culture of manufacturing here that has persisted over the last 50 years, and by design we try to keep it diverse so we’re not dominated by just one industry,” says Allen Hester, president and CEO of the Dyersburg/Dyer County Chamber of Commerce for the past 14 years.

The area’s best-known product these days may be Michael Ballard, the dreadlocks-sporting star of the reality TV show “Full Throttle” and owner of the Sturgis, S.D., biker bar by the same name. He comes from Trimble, population 800, and you might just see him there lately. That’s because he’s chosen to invest some of his millions in constructing a moonshine distillery and a companion bourbon distillery, and expects to create up to 50 new jobs.

“Michael started out selling cellphones at the mall,” says Hester, “and he’s gone on now to running a multifaceted Full Throttle brand,” including an energy drink he just licensed to Coca-Cola. “We have this sort of sub-culture of local guys who have come up with ideas for things, and just started manufacturing them, and boom, they’ve taken off. He could have gone to Nashville, Gatlinburg or Atlanta, but he chose to come back because he wanted to do something for his hometown.”

Dyersburg/Dyer County is this year’s winner of Site Selection’s second annual Big Muddy Cup, awarded to the top metro area along the banks of the Mississippi River for new corporate facility investments per 1 million population between July 1, 2013 and Dec. 31, 2014. Analysis of project activity along the river reveals distinct strength in a region with a moniker familiar to sports fans but sometimes overlooked in industrial circles: the Mid-South, where half of the top 10 are located.

Crossing the river is crucial to all those economies.

“Nortek Global HVAC in Dyersburg, Tenn., is our company’s hub for service parts and distribution,” says Aaron Tiede, Dyersburg plant manager for Nortek Global HVAC (formerly Nordyne), which like other companies such as Caterpillar, NSK Steering Systems, Dot Foods and Eaton, has chosen to invest recently in facility growth. “We distribute 3,000 to 7,000 parts orders per month, ranging from one-piece orders to truckload orders, and we have found that Dyersburg’s central location to our customer base serves our customers very well in terms of transit times and freight costs.”

Tiede points to the chamber’s industry roundtables as an important forum for supporting what he calls “a fantastic industrial and business climate.” Central to that climate is the workforce.

“Nortek Global HVAC in Dyersburg is an extremely seasonal business,” he explains. “On an annual basis we onboard at least 33 percent of our peak annual employment. As a result, we have taken advantage of the many state resources at our disposal for recruiting, and this has served us very well with qualified candidates who can perform at a level that provides the quality our customers have come to expect.” He says state training dollars have resulted in thousands of dollars in reimbursements over the years.

Keeping the workforce pipeline full are programs from Tennessee College of Applied Technology, Dyersburg State Community College and a chamber/school system STEM-skills program called “Gearheads” that shows children the connections between science and engineering and lucrative careers in manufacturing.

“Students get a chance to tour industrial facilities and perform special projects aimed at educating students about how science and technology can be applied right here in our small town,” says Tiede.

Allen Hester is a product of the river, born less than a mile from it in Memphis: “The Mississippi is a working river,” he says. “It is a mighty, mighty force of nature, and you must respect it at all times. And it changes all the time. It’s a beast.”

But it’s a beast that’s friendly to commerce, laden with barges day and night. And today, like other Mississippi River port towns — such as Quincy, Ill., where the Mid-America Intermodal Port continues to build steam — Dyer County’s industrial development future involves looking back at the river whence it came.

The $53-million Port of Cates Landing — built by three counties at a former US Corps of Engineers site — is located in Tiptonville, in Lake County, where US Foreign Trade Zone No. 283 was just established in 2012, and is administered through the Northwest Tennessee Regional Port Authority. The next step involves connecting the port by short-line rail to the existing CN mainline. Area leaders worked for 15 years raising the funds to build the port.

“The counties each issued bonds to help pay for it — Dyer and Obion issued bonds for a project that wasn’t even in their counties,” says Hester. “How often do you hear that? It’s a great example of rural, collaborative economic development, and I’m really proud of that … When we get the rail in place, we’ll really have something to brag about.”