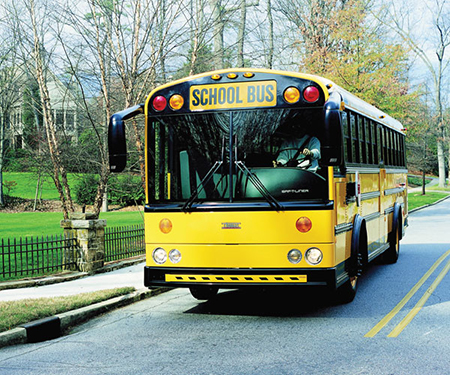 Thomas Built Buses in October 2014 announced the investment of $11.8 million to add additional capacity and up to 236 new jobs to the company’s operations in High Point, N.C., to make the Thomas Built Saf-T-Liner® C2 (pictured).
Photo courtesy Thomas Built/Daimler
by PATTY RASMUSSEN
and
ADAM BRUNS
N 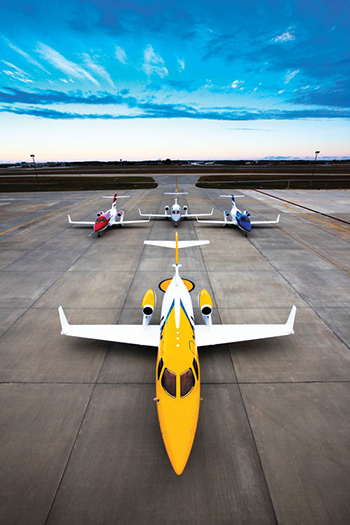 orth Carolina takes the top spot this year in the Tier-2 metro category, with Greensboro-High Point moving up three spots from its fourth-place finish in 2013. Elkhart-Goshen, Ind., was the biggest mover, climbing up six spots from No. 9 in 2013.

But North Carolina’s dominance extends throughout the top performers. Durham-Chapel Hill moves up too, from 11th place in 2013 to sixth in 2014. And if you toss in a strong showing from nearby Winston-Salem (12 projects, good for a tie for 30th in Tier 2), then one thing is evident: The Piedmont region’s profile is growing more prominent with each passing month. Taken as a unit, the Greensboro-High Point and Winston-Salem metros would comprise the 37th largest US metro area, with a population exceeding 1.6 million.

According to the 2015 State of the City report, the metro area, with just under 280,000 residents, experienced the largest percentage increase in per-capita income of the state’s five largest cities, growing by 13.8 percent to $27,202 between 2012 and 2013. Projects in the area came from Shri Govindaraja Textiles in Eden, and Technimark, AEC Narrow Fabrics and Kennametal in Asheboro, among others.

Projects landing in Greensboro proper in 2014 included investments from Boise Cascade and Goodyear, and incremental investment from one of the city’s most prominent employers, Honda Aircraft Co., which is investing $19 million as it develops the HondaJet at its location at Piedmont Triad International Airport.

Among the projects in High Point in 2014 was a $34-million expansion by longtime area employer Ralph Lauren, creating 500 new jobs. Loren Hill, president of High Point Economic Development Corp., has seen Ralph Lauren expand five times just since Hill arrived in 2001. The company has been there since 1991, and had expanded in 1998 as well.

“They trust the city’s ability to deliver on what we say, and help them meet the timeline for projects,” Hill says. “In this case the city is extending water and sewer lines, and the property was annexed into the city. There has been $5 million worth of utilities work, with water lines sized appropriately to open up that whole area.”

When High Point EDC — the only EDO in the region that is part of city government — held its annual meeting in November 2014, 28 companies had either begun or announced expansion projects that year in the city, whose territory goes into four different counties. Seventeen of them were manufacturers, seven were furniture companies, six were creating more than 100 jobs, and four were foreign. All of the above traits applied to the new occupant of the space where the meeting took place, a 100-year-old former Pickett Cotton Mill that is now home to Belgian acoustic furniture maker BuzziSpace.

Hill particularly remembers something BuzziSpace leaders told him as they considered going into a part of town that hadn’t yet been gentrified: “We don’t want to wait for a neighborhood to change, we want to help the neighborhood change.” In an interview, BuzziSpace CEO and co-founder Tom Van Dessel confirms that notion.

“A lot of it is feeling,” he says of a site selection process that included finalist regions such as office furniture capital Grand Rapids, Mich., and southern Indiana. “I know some of the data, but what I’m really sensing here is this willingness of High Point and the Triad area to do something different and to get out of the slump it’s been in for a while. Honestly, there is PR value to us coming here. In Grand Rapids, we would have been dwarfed. But in High Point, you’re a ray of sunshine in an area that has not had too many good pieces of news. You want to be part of that success.”

BuzziSpace’s products combine aesthetics and noise reduction properties, responding to an increasingly open-office world, and to “the global need to bring silence and style to the office.” Based in Antwerp, Belgium, it has showrooms in Chicago, Atlanta, Sydney, London and Rotterdam. Van Dessel says its products have gradually caught on not just with tech and creative firms in Silicon Valley, but with corporates such as ExxonMobil and State Farm. 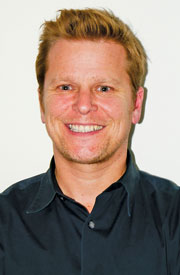 “We can make an impact on so many levels — partnering with the city reinforces our brand.”
— Tom Van Dessen, BuzziSpace CEO and co-founder, on the company’s investment in a 100-year-old cotton mill in High Point, N.C.

The initial aim was to find a contract manufacturer. BuzziSpace leaders visited nearly 20 manufacturers up and down the furniture belt along the Mid-Atlantic and Southeast US. The visits helped them understand why they needed to build their own place.

“Nobody had the exact skills we needed,” he says. “If we had to spend this much time and effort to train, we might as well do it ourselves.” BuzziSpace also needed to understand the level of collaboration from the local EDOs.

“For me, it wasn’t just about where the best incentives are,” says Van Dessel. “It was a combination of ‘Who’s got skin in the game?’ and ‘Who wants it to be a success?’ as opposed to ‘What’s the biggest dollar value we can get?’ Ranked much higher on the scale for us was the labor pool, the availability of vendors and therefore raw materials and components.”

Community chemistry was the final element. “Do we feel this community is as invested in us as we’re going to be with them?” says Van Dessel. “We found that pull the most from High Point.”

Some practical magic helped too: Until now, the company had been shipping through the Port of Savannah, Ga., to its office, warehouse and showroom in Atlanta, where products were cross-docked and shipped on to customers. Using a small shipping line called ICL, they now ship through Wilmington, N.C., directly to High Point. “It’s shortened our lead times by about a week,” says Van Dessel.