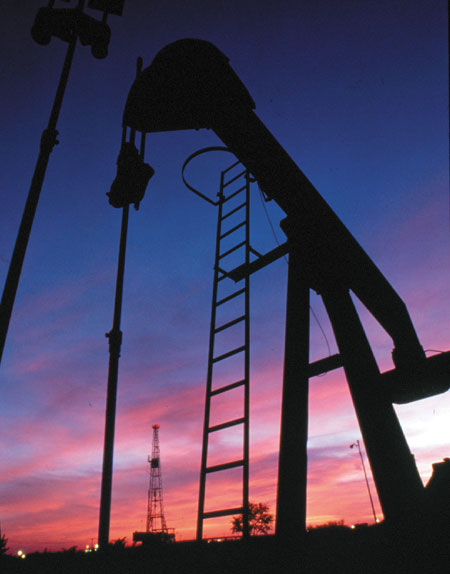 A pumpjack works in the Permian Basin, where Tier-3 Top Metros Odessa and Midland are located.
Photo courtesy of Odessa Convention & Visitors Bureau
by PATTY RASMUSSEN
and
ADAM BRUNS
W

ith Odessa No. 1 and Midland tied for fourth place in our tally of corporate facility investment success for 2014 in Tier-3 cities, West Texas would seem to be on a pronounced upswing. But oilfield services companies are laying off people following the drop in oil prices that has unfolded as 2014 gave way to 2015.

How big has the boom been? A May 2014 presentation entitled “49 Months of Economic Expansion and Counting” by Guy Andrews, the former director of economic development for the Odessa Chamber of Commerce, painted the picture then:

Andrews moved to a position with the area’s largest employer — industrial contractor Saulsbury Industries — in July 2014. That company’s main line of business is servicing natural gas plants, and it was planning to expand its HQ to accommodate an additional 200 employees. Other recent projects have come from Air Products, Halliburton, US Silica Holdings, Baker Hughes and Schlumberger.

The challenge is sustaining momentum.

“Infrastructure is always an issue in such a fast-paced growth scenario as we’ve experienced the past four to five years, and sometimes it’s extremely difficult to predict future needs,” says Scott Jones, director of economic development for the Odessa Chamber of Commerce. “I believe Odessa’s leaders have done a great job of developing industrial sites in advance of demand, which is the main reason we were number one in project count nationally for markets of our size. We are currently developing the next generation of business and industrial parks while oil is priced lower, and we have some time to catch up before the next wave of high demand.”

Workforce development, healthcare and utility partners are all doing their part too. So is city government, which Jones says “is extremely forward-thinking in planning for future service needs, and is currently completing a comprehensive city plan, using outside consulting engineers, to ready Odessa for its next several decades of orderly growth and ensure continual improvements to meet residents’ needs.”

Though the Halliburton/Baker Hughes merger will cause jobs to be shed locally in the short term, Jones says, “We know those jobs will come back along with higher oil prices and renewed exploration, so long term we should see even more investment in Odessa and ensure a continual presence for the firm. If there is any facility consolidation in the near future, any buildings vacated will be quickly refilled, based on past experience. Any jobs trimmed will likely be the underperforming percentage of its workforce, who will likely migrate to smaller firms or alternate businesses. We are still seeing unemployment figures around 3 percent currently.”

Jones, whose background is national corporate real estate services and site selection for global firms, says industry diversification is his No. 1 goal as economic development director.

“We are currently developing the next generation of business and industrial parks while oil is priced lower, and we have some time to catch up before the next wave of high demand.”
— Scott Jones, Director of Economic Development, Odessa Chamber of Commerce

“Odessa has been highly successful in attracting manufacturing and logistics firms — including recent large distribution centers for Coca-Cola, Standard Sales, and Family Dollar Stores — and will continue pursuing industry clusters our business and government leaders deem most advantageous to our regional diversification efforts,” he says. “We are working on some international opportunities with Mexico and other countries. Hundreds of new jobs have been added unrelated to energy, and we will continue to expand this trend in order to help the local economy weather the effects of oil price fluctuations.”