As foreign investment pours in, personal and professional ties with other nations only strengthen Turkey’s business case. 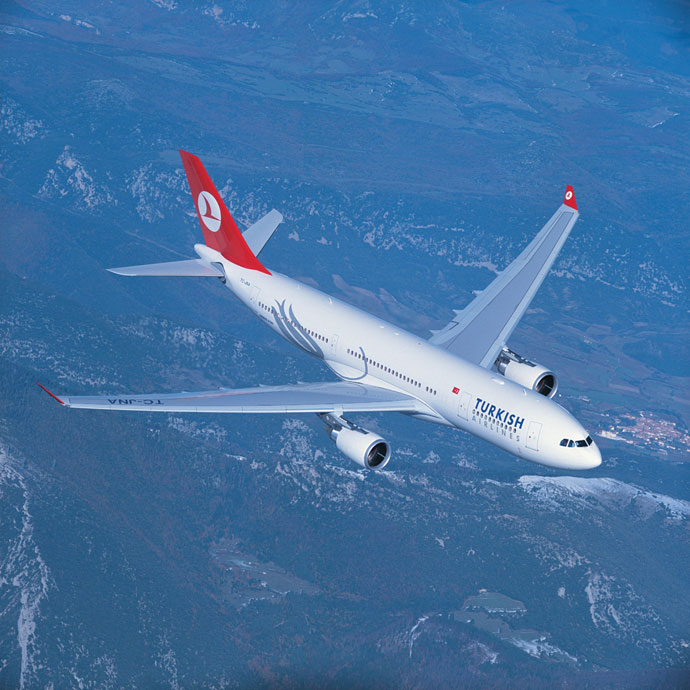 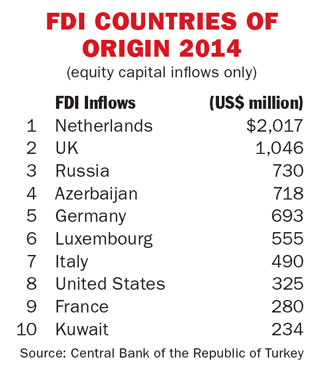 Source: Central Bank of the Republic of Turkey

ow does an average monthly influx of US$1 billion strike you?

Turkey attracted approximately $12.5 billion of FDI in 2014, while bringing down its year-over-year current account deficit by 29 percent. Manufacturing ($3 billion), financial and insurance services ($1.5 billion) and energy ($1.3 billion) were the top sectors. Manufacturing and energy accounted for half of FDI inflows between 2010 and 2014, up from 27 percent between 2002 and 2010.

Thanks to structural reforms, a strong financial sector and increasing confidence in Turkey, the amount of FDI, which was about $15 billion total from 1923 (the year of Turkey’s birth as a secular republic) to 2002, increased to almost $150 billion between 2003 and 2014, while the number of companies with foreign capital rose from 5,600 to more than 41,000 during the same period.

The FDI influx is driving metro-area momentum. The Brookings Institution’s Global Metro Monitor report, released in January 2015, examined 300 global cities on specific measures of economic performance during 2013-2014. “Despite national security concerns, Turkish metropolitan areas had an exceptional 2014, with Izmir (No. 2), Istanbul (No. 3), and Bursa (No. 4) each placing among the world’s top five performers, led by strong expansions in business and financial services,” said the report. The country’s capital of Ankara placed ninth. 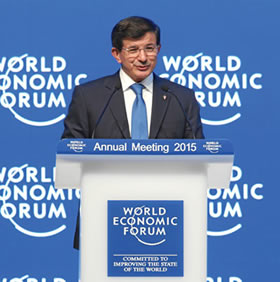 Speaking in the context of Turkey’s presidency of the G20, Prime Minister Ahmet Davutoğlu of Turkey (pictured) told participants at the 2015 World Economic Forum in Davos that Turkey is continuing to play the role of mediator and bridge-builder. He noted his plan to address the growing challenge of youth unemployment and to help welcome 100 million more women into the global workforce by 2025.

YOK, Turkey’s Council of Higher Education, approved a quota of 50 percent at Ege University in May 2014, ensuring a pipeline of female students into Cummins Inc.’s Technical Education for Communities (TEC) program in Izmir. “This approval marks both an achievement for TEC and a step toward societal change,” said Mark Levett, vice president, Corporate Responsibility, Cummins Inc., and CEO of the Cummins Foundation, in announcing a coalition with Schneider Electric and Ege University to support a new mechatronics program at Ege.

The Netherlands and the UK were the leading countries of FDI origin in 2014. At No. 8 on the list was Japan, where pioneering steel product company Toyo Kohan is based. In early January 2015, Toyo Kohan and Turkey’s leading flat steel and pipe producer Tosyalı Holding laid the foundation stone for a new 250,000-sq.-m. (2.7 million-sq.-ft.) plant to be operated by their joint venture Tosyalı-Toyo Çelik A.Ş. in Osmaniye Organized Industrial Zone (OIZ), just north of the Syrian border and not far from Turkish ports on the Mediterranean.

It’s Tosyalı’s 17th plant worldwide, with 14 in Turkey: three at Osmaniye OIZ, one in Istanbul, one in Izmir and nine at Iskenderun OIZ. The firm operates other facilities in Montenegro and Algeria. “We’re the global steelmaker of Turkey,” said Fuat Tosyalı, chairman of the company’s board of directors. The new plant’s products will range across automotive, appliances, IT and food and beverage sectors.

“We are proud of bringing in such a joint venture to our country,” said İlker Aycı, chairman of Prime Ministry Investment Support and Promotion Agency of Republic of Turkey (ISPAT), noting the planned reach of the plant into markets in Europe, Caucasus, Middle East and North Africa. The reach of FDI and global trade work to Turkey’s benefit both inside and outside the country: Tosyalı employs more than 3,500 people already across Turkey, and aims to employ as many as 10,000 in its global network just three years from now.

The $500-million cost of the plant is equivalent to the value of advanced steel Turkey currently imports, and which Tosyalı’s overall plan aims to replace eventually with homegrown product. Tosyalı wants the company’s overall exports to grow from just over $550 million in 2014 to $850 million by 2016 and $1.5 billion by the year 2023 —Turkey’s centennial.

Sumida Hirohiko, chairman of Toyo Kohan’s board of directors, said the new plant would further strengthen the relationship between Turkey and Japan.

“We are positioning Turkey as a significant base in our export target to European, Middle East and North Africa markets,” he said, pointing to Tosyalı’s own corporate growth as playing a significant role in Toyo’s investment decision. “Turkey has a strategic importance for us with its rapidly developing economy and with its powerful position in the region.”

ISPAT has implemented sector-specific strategies, including the diversification of FDI sources, and backed by a Customs Union with the European Union, Free Trade Agreements with 20 countries, Double Taxation Agreements in force with 83 countries and Bilateral Investment Promotion and Protection Agreements with 74 countries.

No wonder, then, that when it came time for the World Association of Investment Promotion Agencies to move its offices from Geneva, Switzerland, in 2014, Istanbul was the choice. In his address to WAIPA as its new president, ISPAT’s İlker Aycı pointed to the growing profile of FDI not only going toward emerging economies, but emanating from them.

“With economic growth expected to continue at a faster pace in emerging markets than in advanced economies, this is likely to be less of a temporary trend than it is a changing paradigm,” he said.

In April 2014, İlker Aycı also was appointed a board member of Turkish Airlines, an enterprise that may represent Turkey’s growing global profile better than any other. The company in Dec. 2014 added its 257th destination — Pisa, Italy — and also was chosen Best Airline in Europe at the annual Skytrax World Airline Awards, derived from over 18 million passenger surveys among more than 105 nationalities. The airline flies to more international destinations than any other, and in 2014 saw a 23.6-percent increase in passengers to 48.3 million. 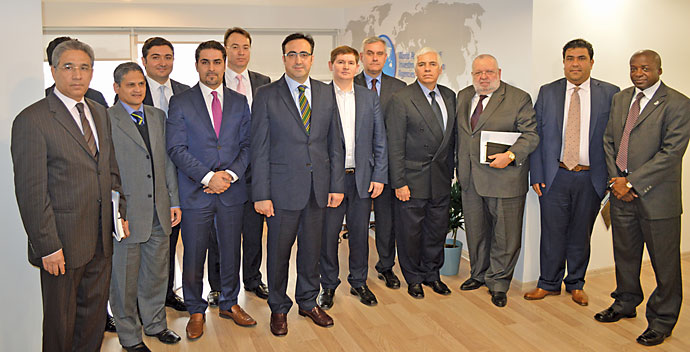 İlker Aycı (seventh from right), chairman of Prime Ministry Investment Support and Promotion Agency of Republic of Turkey (ISPAT), welcomed the relocation of the World Association of Investment Promotion Agencies offices from Switzerland to Istanbul when WAIPA members met there for their 19th annual meeting in 2014. He currently serves as WAIPA president.