Of the entire country’s 33 official metro areas (defined as having at least 100,000 people), only nine of them are in Western Canada. If your company needs talent, you need to know what’s happening in these nine cities. 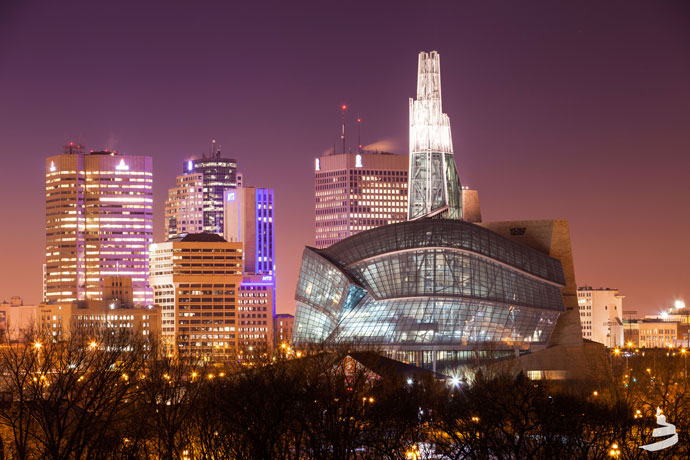 The $351-million Canadian Museum for Human Rights is located in downtown Winnipeg.
Photo by Aaron Cohen courtesy of CMHR-MCDP
by ADAM BRUNS
C

Of the entire country’s 33 official metro areas (defined as having at least 100,000 people), only nine of them are in Western Canada. If your company needs talent, you need to know what’s happening in these nine cities.

According to the 2014 edition of the Brookings Institution’s Global Metro Monitor, among the world’s 300 largest cities, Calgary ranks No. 14 in GDP per capita, at US$64,540, just behind Perth, Australia, and just ahead of New York City. The report said Calgary is one of only five North American metro areas (alongside Austin, Houston, Raleigh and Fresno) to rank among the 60 fastest-growing in the world. According to Avison Young’s 2015 forecast, Calgary’s 3.9 million sq. ft. (362,310 sq. m.) of industrial space under construction comprises 23 percent of the nation’s total, second only to metro Toronto. 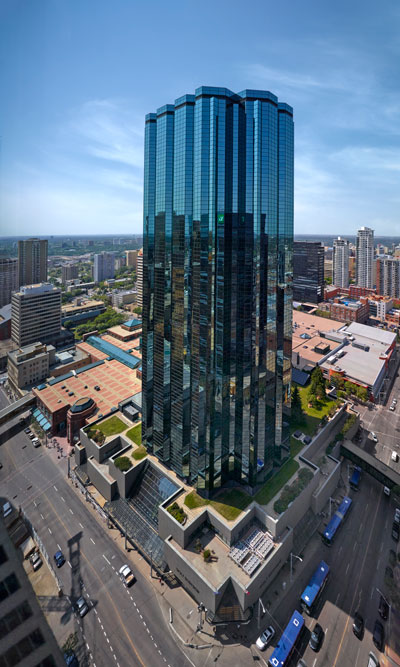 Enbridge soon will consolidate from six buildings to two in Edmonton, where a pedway will connect the firm’s longstanding offices in Manulife Place (pictured) with the new Kelly Ramsey Tower projected to be complete in 2016.
Image courtesy of Enbridge

In December, even as the world was just starting to ponder the impact of low oil prices on oil-producing territories, oil pipeline giant Enbridge announced its long-term Edmonton office plans, confirming tenancy agreements in the new Kelly Ramsey Tower and the existing Manulife Place, as its downtown occupancy has nearly quadrupled to 650,000 sq. ft. (60,385 sq. m.) over the past decade. “After more than 60 years of delivering energy and growing our business in Edmonton we will be creating and delivering new energy within our city,” said Leon Zupan, Enbridge COO, Liquids Pipelines. “This move will allow us to consolidate our 2,500 workers from six buildings to the two tallest and newest buildings in Edmonton’s downtown core.”

From 2006 through Oct. 2014, employment has grown by 36 percent in Saskatoon. Saskatoon and Regina finished in the top four of the most entrepreneurial major cities in Canada, according to an annual ranking released in October 2014 of the best places to start a business by the Canadian Federation of Independent Business.

“Several cranes are piercing Winnipeg’s skyline as a wide range of new developments, including high-rises and the expansion of the RBC Convention Centre, redefine the city core, a process kick-started by the return of the NHL to the city,” reports Avison Young.

Winnipeg’s residential and non-residential building permits grew 9.5 percent to $900.6 million during the first six months of 2014, says the service provider. “This level outpaced the national average of 3.6 percent and represented the strongest growth among metropolitan areas in Western Canada.”

In 2012 manufacturing jobs in the region grew by 40.8 percent, but healthcare and social assistance comprise 10 percent of employment in this region. Other target sectors include aviation/aerospace (driven by the presence of Abbotsford International Airport), higher education (including the 16,000-student University of the Fraser Valley) and agriculture: The city of Abbotsford generates 21 percent of all agricultural revenues in the entire province.

According to the Central Okanagan Economic Development Commission, Kelowna is the second-fastest-growing city in Canada by number of households. A 2020 labor market outlook released by the agency in June 2014 found that the region’s employers plan to hire 75,000 people over the next five years.

With 200 wineries, five ski hills, as well as sandy beaches and 19 golf courses, the Okanagan Valley continues to grow its tourism profile.

With a GDP-per-capita growth rate between 2013 and 2014 of 3.7 percent, Vancouver had the fourth-fastest growth rate relative to its home nation (1.2 percent) among the world’s largest 300 cities, according to the Brookings Global Metro Monitor.

“Government spending tied to port-related transportation infrastructure and bullish sentiment based on strengthening cargo flows through Port Metro Vancouver pushed speculative construction to levels unseen in recent times,” says Avison Young of the Greater Vancouver market in 2014, noting that with forthcoming new space being delivered soon, “Downtown vacancy is likely to exceed 10 percent by the end of 2015, a significant increase from the 3.9 percent vacancy rate recorded in 2012.”

The Greater Victoria Chamber of Commerce in January said amalgamation and regional services top its 2015 policy priority areas. Support for amalgamation was 75 percent in favor in a recent non-binding referendum. Other Chamber priority areas for 2015 include labor supply and retention, municipal financial accountability, and local economic development.

The UAE along with Brazil, Australia, Germany, Mexico and the UK were identified as potential key markets by area export businesses in a report released in Dec. 2014 by the Greater Victoria Development Agency.