Who’s chasing the wind, who’s catching it, and where is it taking us next? 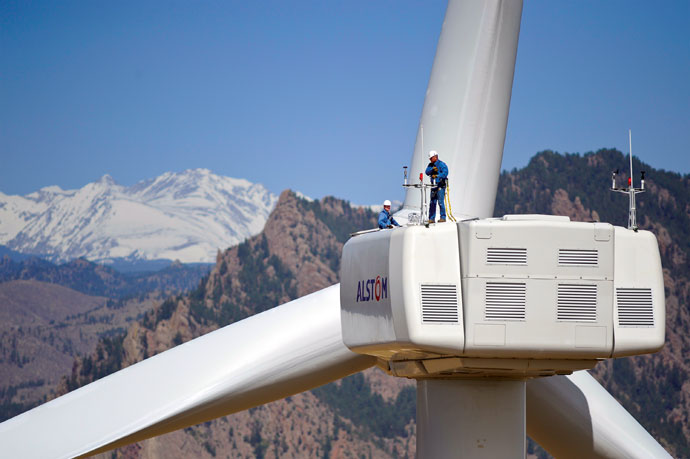 ew projects and new data from companies and institutions around the world function as a global wind flow monitor, whether your favorite metric is air speed, megawatts, jobs or capital investment.

According to preliminary figures released in February by the Bonn, Germany–based World Wind Energy Association, 2014 brought a new record in wind power installations: More than 50 gigawatts (GW) of capacity were added during the year 2014, bringing the total wind power capacity close to 370 GW — enough to contribute close to 5 percent of global electricity demand.

The top 12 countries alone installed 44.8 GW, said the WWEA, which will publish its full statistical report for 2014 in April. Among the highlights:

A separate WWEA report issued in December estimated the total wind resource potential of the world at 95,000 GW. Mining more of that resource will take some major equipment.

The US market for wind power and the equipment that snares it has been intermittent in large part due to the intermittent nature of policy, as the federal Production Tax Credit for wind power rides a merry-go-round of expiration and temporary renewal, most recently expiring at the end of 2014 after a nearly useless two-week extension. Since 2008, over $100 billion in private investment has flowed into the US thanks in large part to that incentive. “Congress must find a way forward,” said American Wind Energy Association (AWEA) CEO Tom Kiernan in late January, “so we don’t lose years of investment and send this promising industry over another cliff.”

Despite the uncertainty, AWEA reported that 4,854 MW of wind power generation were installed in the US in 2014 — over four times more new wind energy than in 2013. There were about 2,500 turbines installed in 19 states. The top states for added capacity in 2014 were Texas, Oklahoma, Iowa, Washington and Colorado. As of the end of 2014, over 12,700 MW were under construction, with 23 states where construction activity was ongoing. Texas has more capacity under construction than is installed in any other state.

Other Shores Serve US Shores

Abroad, wind equipment projects include a 400-job turbine manufacturing facility from Acciona in Areia Branca, Brazil; a TPI Composites blade factory in Dafeng, Jiangsu, China; a Dong Energy distribution warehouse in Grimsby, UK (to serve the company’s major wind farm investments in the North Sea); a $17-million, 250-job blade plant from Metyx in Kaposvar, Hungary, close to the country’s border with Croatia; and Gamesa’s nacelle plant expansion in Mamandur, India, near Chennai. Gamesa says India has emerged as one of the most promising wind power markets.

France is doing its part to supply not only regional needs but US needs too, at the country’s first offshore wind turbine nacelle and generator plants in a new 300-worker, 19,000-sq.-m. (204,520-sq.-ft.) complex in Brittany from Alstom that was inaugurated in Saint-Nazaire in February 2014 to complement the company’s tower and blade production in Cherbourg. The machines Alstom is producing have wingspans of 150 m. (492 ft.) and capacity of 6 MW each.

Full production starting early this year includes five non-standard turbines intended for the Block Island wind farm in the US, which are expected to be commissioned in 2016 and represent France’s first export contract in the offshore wind energy sector, as well as being the first offshore project in the United States. The US Dept. of the Interior took measures in 2014 and early this year to open up territory for competitive lease sales in federal waters off the shores of Massachusetts and North Carolina.

Alstom and others are making strides in Latin America too, including a new $34-million tower plant in Jacobina, Bahia, Brazil from Alstom in partnership with infrastructure giant Andrade Gutierrez (AG). Expected to employ 250, the plant will produce 200 towers a year.

“Brazil should enter very soon the ranking of the largest wind power producers in the world,” said Yves Rannou, senior vice president of the Alstom Wind business, at the Jacobina plant’s inauguration last year. AG, known more for power generation than for production of the equipment to generate it, said the decision to invest in the plant instead of a wind farm was driven by market demand.

“We identified a repressed supply chain,” said Flavio Barra, global president of AG Energy. “What we propose to do is to manage the chain, since there is a tremendous gap to be filled.”

Nacelles and generators will be manufactured at Alstom’s new complex in Saint-Nazaire, France.
Rendering courtesy of Alstom