‘Nimble in Every Way’ 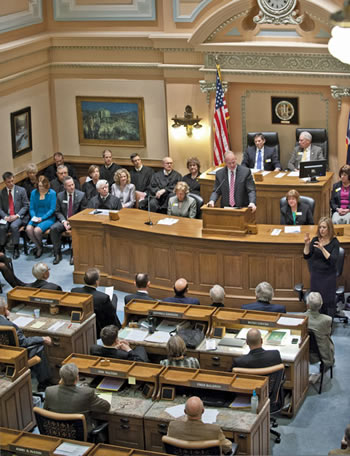 Governor Matt Mead delivers his 2015 State of the State address.
Photo courtesy of the Office of the Governor

yoming’s chief executive, Governor Matt Mead, was re-elected to a second term by a wide margin in November 2014. Mead presides over a state that, until recently, enjoyed a boom in revenues thanks to the energy sector. The Tax Foundation has ranked Wyoming first in its ranking of states with the best tax climate for several years running, and the state enjoyed a 7.6-percent real GDP growth rate, surpassing the national average.

In his conversation with Site Selection, Mead addresses how Wyoming is tackling the challenge of decreased tax revenue from plummeting oil prices, and how the state with the smallest population in the nation strives to meet the workforce needs of incoming companies.

Site Selection: How does your state plan to address the concerns of employers who don’t think there are enough qualified workers in Wyoming to fill the needs of their advanced manufacturing operations? Do you believe this is a legitimate concern?

Governor Mead: I think it’s a concern, at least in perception. I do know that whether it’s a tech company or whether it’s manufacturing, they look to see the size of the population and think we’re not going to have the skilled workforce needed. We actually view the small size of our population to our advantage because it allows us to be nimble in every way.

We’ve been very aggressive in terms of trying to build up our workforce training fund and workforce services. We have been pushing STEM everywhere we can, grades K through 12 and up to our one university, the University of Wyoming. We’re in the process of completing a STEM building that every University of Wyoming student will have at least one class in. We have the Hathaway Scholarship, which provides an opportunity for every Wyoming high school student to go to higher education at a reduced rate. We’re seeing the results of that.

The last three years running, the increase in manufacturing in the state of Wyoming has surpassed the national average in increased manufacturing by a fair bit. We’re pleased by the progress we’ve made, but we believe we can make a lot more by not only continuing what we’ve done but also providing feedback for companies in that sector who have moved here. They have a good message to tell. We believe their expectations have been more than met, and we hope they can provide some good advertising for us. We can get the job done in Wyoming if we can get the opportunity.

SS: You’re not necessarily looking at those types of projects that come in and create 2,000 jobs, but the small to mid-sized companies as your targets? 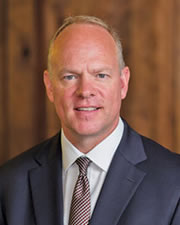 "The best recruiting tool is companies that have moved here and made it work."
— Governor Matt Mead

Gov. Mead: Yes, and that’s in part because we do recognize our population. But we also recognize that if you put 2,000 jobs into any one of our towns, even our largest towns, it’s not just a question of meeting workforce, it’s whether the infrastructure and the town are ready to handle that sort of influx. Because we’re small, I have the ability on important projects to meet with the companies myself. We want the right business, the right fit. I tell companies that we’re interested in that we want you to come to Wyoming, but we only want you to come if it also meets your needs. The best recruiting tool for new companies is companies that have moved here and made it work. The flip side is recruiting a company through good salesmanship, finding it’s not the right fit and having them move out of your state. We want them to come here and enjoy success.

With regard to data centers, we will take as big as they can get. They’re not intensive on the number of employees but they’re intensive in wanting low-cost electricity, and the lowest taxes in the country. Those things we can supply in abundance.

SS: How have declining oil prices impacted your state’s economy, and how will you address this issue?

Gov. Mead: Because about 70 percent of our revenue is generated by minerals, oil and gas, and because we’ve seen ups and downs in that in the past, we’ve prepared well these past four years. We have a rainy day fund that has had record growth — it’s almost doubled during my time in office. Our permanent fund has grown by 55 percent. We’ve worked hard to streamline state government; we have fewer employees than we did four years ago. We’ve asked each agency to reduce their rules by 30 percent, and we’re now rated as the second most business-friendly state.

We can’t control the price of oil but we can prepare for lower prices and we can control how we react to them. I told the legislature in my State of the State speech that those people who came before us, setting the table for us, were builders. And with the savings we have, we need to continue to build and to diversify our economy — not just for economic needs but to provide as many opportunities as possible for our young people. Obviously we would like to see higher oil prices, but we are well positioned to remain open for business, even during this downturn in oil.

SS: What are your top three priorities for the state with regard to economic development and business retention and expansion?

“While people don’t always think of Wyoming and tech in the same sentence, with the success we’ve had and the success we anticipate in the future, this is the place.”

Gov. Mead: Our top industries are minerals, tourism and agriculture. When I first started saying four years ago that we were going to have a fourth-largest sector that would be technology, it was met with smiles or worse in terms of people being skeptical. But I’ve seen the progress we’ve made in four years, and I really believe that we should continue to focus on making technology — everything from manufacturing to data centers to software companies — a key priority. It diversifies the economy and gives young people more opportunities.

Economic development remains one of my key priorities because if you can do that and do it well, not just in the good times but in the harder times, it allows you to do the other things you want. Education is a top priority for me, but if we don’t have the revenue from economic development we’re not going to be able to work on education. Infrastructure — roads, bridges — remains a top priority for me, but again without a good robust economy, it’s hard to work on those things.

SS: Let’s talk about emerging industry clusters. What is something that Wyoming is not well known for now that may become more widely known in the next decade?

Gov. Mead: We love the data centers, but we want to have that umbrella of technology to cover other things as well. Last year, I set up the Global Technology Summit in Jackson Hole. Ultimately we want that to rival the media summit they have in Sun Valley, Idaho, every year. In the first year, we had Google there, Microsoft and AT&T. We want to say, with the broadband infrastructure we have — we just finished building the unified network which provides a 100-gigabit backbone in the state — and with the low cost of electricity and the lowest taxes in the country, we’re looking for everyone from the one-person shop to the bigger shops.

In Jackson Hole, for example, we have robotics companies that are developing amazing things. In Sheridan, we have software companies. Our message is that while people don’t always think of Wyoming and tech in the same sentence, with the success we’ve had and the success we anticipate in the future, this is the place. On top of it all, we have a tremendous quality of life that is appealing to the young people who are into technology.

We can provide not only the job, but the quality of life.