“Bringing our workforce together from four separate buildings into one shared facility was a key objective,” said Steve Smith, president and CEO of Hoosier Energy, when the utility’s new headquarters opened in Bloomington in 2014.
Photo courtesy of Hoosier Energy

For Hoosier Energy and its rural electric distribution partners, accolades are welcome. Making connections is even better.

pen your arms to new neighbors, and you might just find yourself embracing new investment too.

When Japanese Tier 1 auto parts supplier TOA established its first and still only North American plant in Mooresville, Ind., in 2000, the children of Shinichi Iizuka, CEO of TOA (USA) and president of its parent company, TOA Industries Co., Ltd., were enrolled in the local school system.

“The Mooresville school system welcomed with open arms our company owner Mr. Iizuka’s two daughters,” says Matthew Gallo, director of sales and procurement for TOA (USA). Before long, the leader was ready to give back to the community, located just southwest of Indianapolis.

“Mr. Iizuka came up with the idea of sponsoring a trip each year for a small group of Mooresville teachers to travel to Ota City, Japan, the hometown of our parent company,” Gallo explains. “During these trips to Japan Mr. Iizuka makes arrangements with the local school system in Ota City for Mooresville teachers to spend time observing classroom activities to better understand how those activities are structured in a different culture.”

The cultural exchange mission goes beyond that. The company also is a corporate sponsor of the Japan American Society of Indiana (JASI).

“In fact, it is the hard work of both this organization together with the state government that has made Japan Indiana’s fifth-largest export country,” says Gallo. TOA also is a member of the Indiana Automotive Council, which aims to strengthen the competitiveness of Indiana in the industry.

With the help of the town, Indiana Economic Development Corp. and the company’s utility partners, TOA is doing its part, as it embarked in 2014 on a $72-million, 220-job expansion at the 460-job plant. The announcement followed a fall 2013 visit with Iizuka by Indiana Gov. Mike Pence during the latter’s trade mission to Japan.

“Our valued relationship with South Central Indiana REMC and Hoosier Energy over the several years has made our most recent expansion a huge success,” says Gallo.

The company is taking advantage of a new economic development rider from South Central Indiana REMC, which purchases 100 percent of its power from Hoosier Energy under a long-term contract. The co-op is one of 18 member co-ops in the Hoosier Energy Power Network, which serves 49 southern and central Indiana counties and 11 counties in Illinois.

Valued relationships are nothing new in Hoosier Energy territory. You need only harken back to TOA’s original site selection process.

“Being a large supplier of both body structure and suspension components to Subaru, TOA (USA)’s proximity to Subaru’s Lafayette [Ind.] plant was critical as TOA (USA) ships approximately 30 semi truckloads of product each day,” writes Gallo in an email. “In the beginning, TOA visited 18 cities in two states, all located within a one- to two-hour radius of the Lafayette Subaru manufacturing facility.” Having room to expand in the future was “another critical factor in the decision-making process.”

“It was the dedication of both the people and businesses towards making the community of Mooresville grow and prosper that TOA found most appealing.”
— Matthew Gallo, Director, Sales and Procurement, TOA (USA)

What cinched that investment?

“It was the dedication of both the people and businesses towards making the community of Mooresville grow and prosper that TOA found most appealing out of all the places that were visited,” writes Gallo.

Today TOA (USA) is a valued supplier not only to Subaru, but to Toyota’s plant in Princeton, Ind. Not far away from Princeton, along the White River in Daviess County, another growing company is benefiting from Hoosier Energy’s economic development assistance.

In December 2014, Grain Processing Corp. (GPC) picked the town of Washington over its hometown of Muscatine, Iowa, for a $70-million, 16-job expansion for the production of maltodextrins. “GPC Washington, built just over 15 years ago as a state-of-the-art corn wet milling facility, has been an important investment in meeting the demands for an uninterrupted supply of high-quality products for our customers,” said GPC President John Thorpe.

Uninterrupted supply is a familiar phrase to Hoosier Energy. Lately it applies as much to internal innovation, external assistance and useful data as it does to electricity.

In addition to helping so many companies with their own location decisions, Hoosier Energy considered more than 60 sites for its own new headquarters, which opened in 2014 in Bloomington and is already optimizing how teams collaborate.

The new website of Hoosier Energy Economic Development, which made its debut in November 2014, immediately earned a Silver Award for Digital Advertising, Website – Consumer Division, from the Evansville chapter of the American Advertising Awards. It also earned an MVP award from Gwen Tucker, executive director of the Owen County Economic Development Corp.

The project proposal is one of two that Tucker has put together with the website’s help. Both projects are still pending. But her enthusiasm for the assistance is not.

“The real value of their tool online is it gives an idea to the folks looking at our area what package would be available as they try to choose a location,” she says, noting how valuable such tools are when time is of the essence. “So they get a real number, as opposed to me saying, ‘I might be able to offer an abatement.’ ” 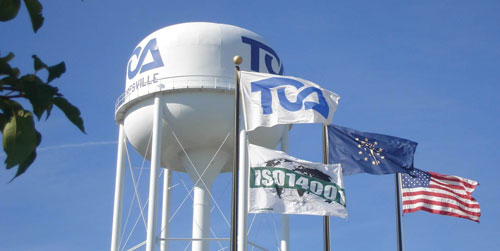 “We’ve enjoyed building a great relationship with the town of Mooresville and with Indiana,” said Shinichi Iizuka, CEO of TOA (USA) and president of its parent company, TOA Industries Co., Ltd., in April 2014 when announcing the automotive component manufacturer’s $72-million, 220-job expansion.
Photo courtesy of TOA

“Jeff has been invaluable to my success during my first year as a new economic developer in the county,” says Tucker, an Owen County native. “I couldn’t ask for better partners for what we do here in the county.”