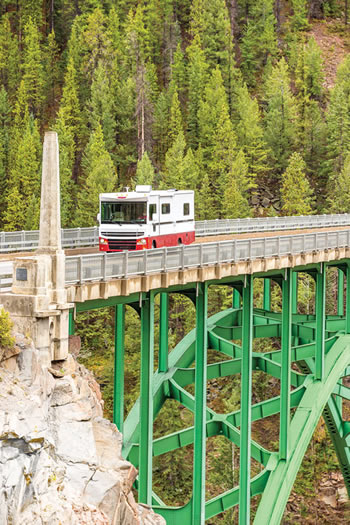 Winnebago Industries has been located in Forest City, Iowa, since its founding in 1950. The company is known for manufacturing quality motorhomes, campers and fifth wheel products.
Photo by John Linn, Adventure Studios courtesy of Winnebago

An Iowa manufacturer finds plenty of reasons to keep operations nearby.

reater Cedar Valley Alliance & Chamber (GCVAC) and their economic development partners were delighted to announce that iconic motorhome manufacturer Winnebago was moving a portion of the company’s manufacturing from the headquarters in Forest City, Iowa, to an existing building in Waverly, Iowa. It’s a project that might not have materialized if they hadn’t taken the initiative to make a phone call.

After reading about the company’s projected growth in a news story, the GCVAC contacted Randy Potts, Winnebago’s chairman, president and CEO. “It was really coincidental,” says Potts. “We looked at various properties with a commercial real estate broker we’re familiar with, but I got a call from a person representing the GCVAC. She was pretty persistent.”

Once the two parties finally connected, the GCVAC sent information on several properties including the Waverly site, which immediately caught Potts’ eye. They were able to work out the purchase arrangements, and just like that, Winnebago was in Waverly. “Had she never reached out to me and had I never returned her calls, it wouldn’t have happened,” Potts says.

Winnebago’s Waverly production facility will assemble wire harnesses that supply power to different parts of the motorhome. It’s the type of work that requires mental and physical dexterity. “In our business it’s a low volume/high variation product,” Potts says. “The person building harnesses for Winnebago has to be able to do a lot of different jobs. They’ll have to build many different wire harness assemblies as the day wears on — that’s where the skill comes in. It requires knowledge of the different processes.”

Workforce issues drove much of the decision to move the wire harness assembly out of the Forest City facility. The company was experiencing high growth, and was unable to find enough employees to sustain the growth.

“We needed to relocate some of our work into another labor market,” says Potts. After identifying some of the manufacturing processes that would be practical and impactful to relocate, the company determined which geographic regions were close enough to still feed the Forest City assembly operations. Because of the urgency of the need, Winnebago had to find an existing building that could house the relocated operations. At the end of the day, the Waverly facility won out.

In terms of finding employees, layoffs at a company near the town play in Winnebago’s favor; some of those workers might be good candidates for jobs at Winnebago. “We also looked around the area and tried to determine if there were other employers offering work that was similar to what we were offering, and there weren’t,” Potts says. “We think the positions we’re offering are unique enough to attract workers.” The problem for Winnebago isn’t just the number of workers or their lack of skills, it’s the company’s growth rate — admittedly, a good problem to have. “Growing as quickly as we have post-recession, I think we’ll be able to find more people, but it will take time,” he says.

Workforce challenges Potts mentions aren’t specific to Iowa. Across the country and in every sector, companies are dealing with shortages of skilled labor. According to the US Bureau of Labor Statistics, the demand for construction laborers and helpers is projected to grow 25 percent from 2012 to 2022, much faster than the average for all occupations. Construction industry consultant FMI recently surveyed top executives at some of the largest contracting firms in the US. Their report found that “24 percent of respondents will be unable to bid more work and 32 percent will experience slow growth if their companies cannot reasonably meet the need for skilled labor and tradespeople.” 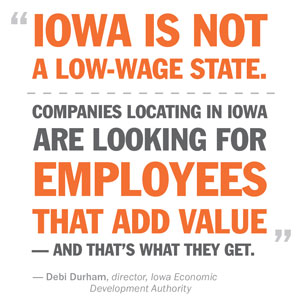 Executives at CF Industries recently announced the cost of expanding a fertilizer facility in Port Neal, Iowa, would now top $2 billion, in part because of the rising cost of attracting and retaining skilled construction workers in the upper Midwest. The original estimate of 2,000 workers at peak construction has been raised to 2,200, with many of those laborers coming from out of state. Fortunately, state leaders in Iowa are aware of the situation and have developed creative solutions to address Iowa’s workforce needs. The state is placing fresh emphasis on apprenticeship programs, both in the traditional sectors and the growing IT and computer programming sectors.

“A program anticipated to yield additional qualified employees is the STEM Internship program. Coupled with the Iowa Student Internship program, they are a great way for Iowa companies to attract highly qualified employees as well as retaining Iowa students,” said Debi Durham, director of the Iowa Economic Development Authority (IEDA). “Iowans are hard workers and very productive — the value of which can’t be underestimated. We often hear stories from our companies about the quality and quantity of work that comes from their facilities in Iowa, out-producing others around the country and around the world. Iowa is not a low-wage state. Companies locating in Iowa are looking for employees that add value — and that’s what they get.”