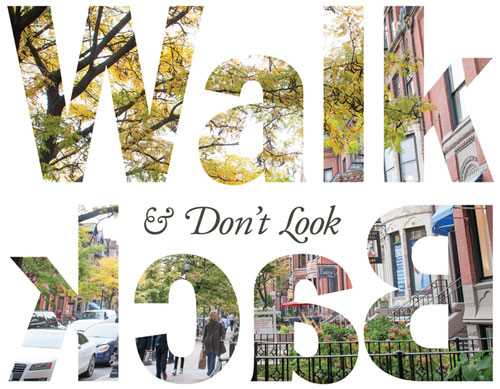 ew research on walkable urban places (WalkUPs) from LOCUS, a program of Smart Growth America, sheds light on the Boston metro area, which LOCUS last year ranked the third most walkable in the nation. The insights come as a 2024 Olympic Games bid may gear up infrastructure investment that would make Boston and its greater region more walkable and transit-oriented — and therefore more attractive to talent and corporations — than ever before.

“Metropolitan Boston is one of those metro areas moving beyond sprawl,” says the report, with a walkable urban future “materializing on less than 6 percent of the metropolitan area’s land — the same six percent that houses 37 percent of the region’s real estate square footage, 40 percent of its population, and 42 percent of employment.”

With an average size of 337 acres, metro Boston’s 57 WalkUPs span 33 towns and cities, mostly inside Route 128. Their floor-area-ratios are six times denser than Edge Cities, yet still present opportunities for infill development and redevelopment. 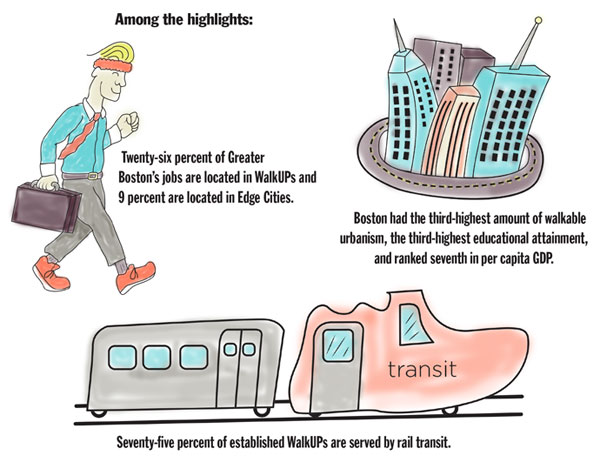 Based on an analysis of data provided by Cushman and Wakefield, the average office cap rate in WalkUPs was 4.6 percent, versus 6.5 percent for offices in Edge Cities, a 41-percent WalkUP cap rate premium. WalkUP office rents average $39.55 per sq. ft., which is 78 percent higher than the Edge Cities average of $22.34, up from 61 percent higher in 2001. By combining both the rent and the cap rate premiums, the value premium for office space in WalkUPs, is 150 percent over Edge Cities, up from 100 percent as recently as 2007. Yet office rents in Walkable Neighborhoods at $18.59 per sq. ft. are actually 3 percent lower than in drivable sub-divisions.

The report ranks the 57 WalkUPs in precious-metal categories. Only five of the area’s 57 WalkUPs were deemed Platinum: Back Bay, Beacon Hill, the Downtown Business Improvement District, the Financial District and MIT/Kendall Square. The high rents and barriers to entry in those areas ($47.21 per sq. ft., and $34.2 million in assessed value per acre) mean the greatest opportunities for corporate occupiers and developers may be in Copper-level areas such as Framingham, Lowell, Brockton and Wakefield‚ the latter two benefiting from commuter rail service.

Among the 13 areas achieving Gold status are Boston’s North End and Chinatown, which in March were independently ranked by Walk Score as the most walkable places in Boston, and also received high scores for transit service and bikeability.

Real Capital Analytics in April launched the RCA & Walk Score® Commercial Property Price Indices (CPPI), the first of its kind to quantify the price value of walkability for commercial properties.

“Walkability matters,” said Robert White, RCA Founder, “as prices for commercial properties in highly walkable locations show significantly greater appreciation trends than car-dependent locations.” Over the past decade, prices for properties located in Central Business Districts (CBDs) have risen 125 percent while prices for suburban properties that are also considered highly walkable are up 43 percent. Comparatively, property prices are up just 21-22 percent for properties in suburban locations that are determined to be either somewhat walkable or car-dependent.

From the LOCUS perspective, the best opportunities may be in the Silver category, a set of 16 areas including Allston, Charlestown and Waltham that may still be viewed as economically risky, but have “a trajectory that suggests they will continue to develop into higher-performing walkable urban places,” says the report. “In time, WalkUPs that are ranked as Silver will yield the greatest relative financial return of any of the ranked WalkUPs.”

A second group of 14 areas categorized as Emerging WalkUPs may quickly become the best values. They include Chelsea, Danvers, Leominster, North Attleborough and Assembly Row, a $1.3-billion mixed-use area being developed by Federal Realty now rising at the site of a former Ford plant in Somerville.

“It’s clear from this research that reliable and efficient transit service is vital to the success of walkable urban places, which are largely clustered around MBTA stations both in the rapid-transit served core and on the outer reaches of the commuter rail,” said Barry Bluestone, director of the Dukakis Center at Northeastern University. 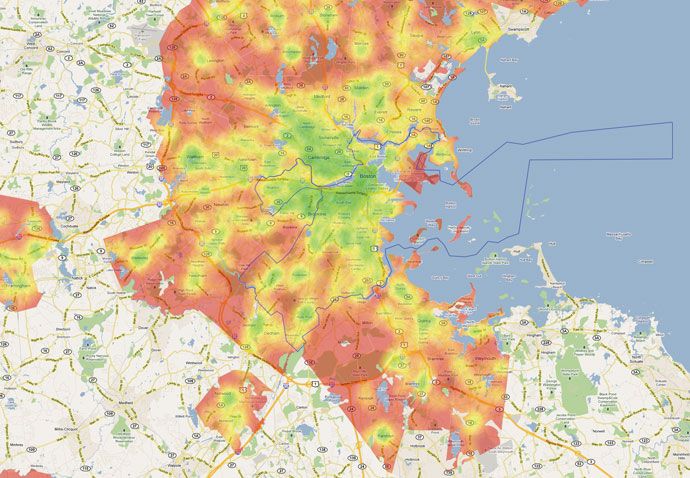 This 2013 heat map of Greater Boston from Walk Score rates the area's walkability on a scale of 0 (red) to 100 (green).
Overall, the metro area ranks third in the US.
Image courtesy of Walk Score