Drive South … of the Border

Mexico states its FDI case $1 billion at a time. But the industry’s birthplace still has something to say too. 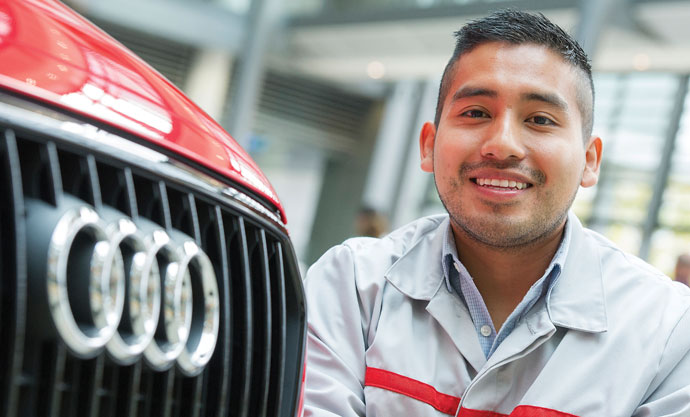 ince January 2012 Mexico has welcomed no fewer than 11 billion-dollar-plus automobile production and assembly investments, creating thousands of jobs. The requisite supplier and parts plants have followed: Of the more than 260 corporate facility investments tracked in Mexico by Site Selection since January 2012, well over one-third are automotive-related.

Toyota in late April announced a $1-billion, 2,000-job new plant in Guanajuato. Ford, also in April, announced a $2.5-billion investment in two new facilities in the states of Chihuahua and Guanajuato, respectively. The investment, which comes during the celebration of Ford’s 90th anniversary in the country, will bring 3,800 direct new jobs. Ford already has 11,300 employees in Mexico, including 1,100 engineers who support global projects from an Engineering Center in Mexico City.

A new engine facility is being built within Ford’s Chihuahua Engine Plant, where the company will produce a new gasoline-powered engine. The $1.1-billion investment and 1,300 new jobs will allow Ford to export engines to the US, Canada, South America and the Asia-Pacific region, supporting the company’s growing small car lineup. An additional $200-million investment as well as the creation of 500 more new jobs is tied to the expansion of Ford’s current I-4 and Diesel engines production in Chihuahua. The Ford Engine Plant in Chihuahua now will become the biggest engine plant in Mexico.

Dig Into the Details

BMW leaders came to President Peña Nieto’s official residence in Mexico City for their billion-dollar project announcement in July 2014, just four months after the automaker re-upped with another $1-billion investment at its signature North American plant in Spartanburg, S.C, and not long before a new plant in Brazil launched production. The company said Mexico’s high number of international trade agreements was a decisive factor in planting its flag in the country, where it ultimately picked San Luis Potosi for its 1,500-job plant.

Segers says power reliability and water are the main issues for companies looking at Mexico.

“For a 4-million-sq.-ft. plant, water was a major criteria,” she writes. “Lots of sites did not make our cut, as not enough sufficient wells were available or the owner’s right of the well was unclear. Also the crime rate was a major topic, as expats will move over to oversee the construction and process.” 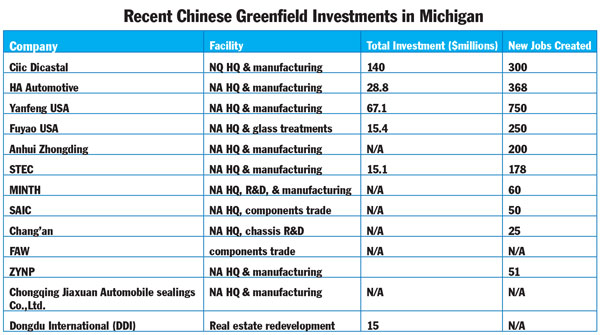 “San Luis Potosi won because the site met all requirements,” Segers explains. “Utilities were nearby, enough wells were available and power was stable. In addition, logistics-wise, it is very centrally located in the Mexican automotive corridor. San Luis Potosi is the ‘two-hour city.’ You can get to all major cities in two hours, except for Northern Mexico.”

Another German carmaker, Daimler, is investing its own $1 billion in Mexico, and is going so far as to link job and car creation there to job retention back home.

“The new plant in Aguascalientes will further enhance our highly flexible and cost-efficient production network with factories all over the world,” said Markus Schaefer, member of the divisional board of Mercedes-Benz Cars, Production and Supply Chain Management. “With the Aguascalientes plant Mercedes-Benz Cars is strengthening the presence in the Americas, creating new growth opportunities in the region and thus safeguarding jobs in Germany.”

The triumvirate of recent German mega-investors in Mexico was rounded out in March by Volkswagen, which announced it would invest its own $1 billion in expansion, modernization and supplier tooling to produce a three-row version of its Tiguan model at its plant in Puebla. The investment involves 90,000 new sq. m. (968,783 sq. ft.) of facilities. Tiguan production of 500 vehicles a day will employ about 2,000 people.

“Localization has become key to safeguarding our competitive position on the global market, and manufacturing the Tiguan in Mexico will bring production closer to the US market,” said Michael Horn, president and CEO of Volkswagen Group of America.

But wait, there’s more ... as in one more billion: The project will add around $1 billion annually to Volkswagen’s auto parts purchasing volume in Mexico. All of which may bode well for the long-suffering southern region of the country.

“FDI manufacturing for export has gradually progressed south in Mexico,” says Doug Donahue, vice president of business development for Entrada Group, a provider of turnkey offshore manufacturing services that operates an industrial park just northwest of Zacatecas, halfway between Aguascalientes and Monterrey, and recently performed its own site selection for a second campus, picking Celaya, Guanajuato, not far from Queretaro, to the south.

Donahue says the southern push is a natural corollary to increasingly dense growth in the country’s northern and central regions. “The next logical step is southern Mexico,” he says. “Puebla with VW there has always had a strong presence, but beyond that, all you’ve really seen is textiles.”

In November, President Peña Nieto proposed the development of three new special economic zones in the south: in the Inter-Oceanic Industrial Corridor, in the Isthmus of Tehuantepec which will link the Pacific to the Gulf of México; in Puerto Chiapas; and in the municipalities adjoining Puerto Lázaro Cárdenas, in both Michoacán and Guerrero.

Donahue says the plans have some huge barriers to overcome, starting with pure distance from the US, but that can be overcome if enough activity and accompanying infrastructure is built. The second challenge will come as the region’s economy deepens, moves beyond labor-intensive projects and needs more skilled labor and management talent. “How are you going to attract it and keep it there?” he asks, though his new location aims to help do just that. “The area is gorgeous. It’s a good place to live and work,” he says, but it will take some time. That said, however, having Audi’s $1.3-billion, 3,800-employee plant opening in 2016 in San Jose Chiapas, just to the north of Puebla, brings some concrete momentum. The challenge, he says, is “to build enough momentum for third-party vendors and freight firms to set up there and make it more efficient.”

Asked if the country’s wealth of projects is causing some staffing and training challenges, Donahue says, “Obviously the market is growing very quickly and has put a bottleneck into some of the skilled labor sets. State governments have recognized this, and are investing heavily in the tech schools, running the schools with the private sector and customizing programs for them.”

Beyond that, particularly for the clients Donahue’s firm works with, “you have to spend more time on training in Mexico,” he says. “It may not be expensive, but you have to double the amount of time you spend in Germany or Canada or the US. On the flip side, whereas in the US and Canada manufacturing is not necessarily a prestigious job anymore, Mexico and Mexicans in general still view manufacturing as their future, as an important part of the economy, and as a noble profession. People want to get into it — they want to be trained and they want to learn. One of the best retention tools is to have a good training program where people are getting other skills.”

It appears that strengthening relationships with the Chinese is helping all parties. The lists represent major recent greenfield and M&A FDI deals landing in Michigan from Chinese firms.

Among them is a $140-million investment in the failed United Solar Ovonic solar energy facility in Greenville by CiTic Dicastal, which will employ 300 in the manufacture of 3 million aluminum alloy wheels per year. The company is adding another 100,000 sq. ft. of manufacturing space on an additional 98 acres it purchased adjacent to the existing complex. In Saginaw, Nexteer has been rejuvenated by China’s AVIC Automotive and has added more than 1,000 jobs at a site struggling on the brink of liquidation not that long ago. Connors calls that operation “a poster child for how a Chinese company can work with a local community.”

Connors’ mandate stretches across all sectors, but recent activity has been largely connected in some way to cars.

“The automotive industry is terrifically global, so Michiganders are no strangers to having collaboration in the industry, first from Europe, and later from Asia with Japan and Korea,” said Connors, who was headed out of town to pitch a project for which a Chinese company was in the hunt. The state is home to more than 375 automotive R&D, engineering and tech centers. “So the idea that the biggest automotive market in the world would be interested in Michigan was not much of a surprise. And communities want the employment.”

Michigan has jumped to fifth place among states tracking greenfield investment from China, behind Texas, California, New York and South Carolina (in that order). Connors said the decision-making process with China’s state-owned enterprises can be more complex because of layers of approvals and more cycles of consensus-building. But, private or state-affiliated, the companies are poised to plant their flags in the US in order to be near the customers and companies they want to reach.

“We have a pretty robust ecosystem of companies interested in working with China,” said Connors. Moreover, Michigan has what he calls “a surprisingly senior” Chinese professional population in the automotive sector, tens of thousands who came over as engineers or senior managers to work in R&D, or to teach at universities. “The same goes for the auto execs back in China,” he said. “A lot of them were trained at Ford or University of Michigan or Kettering University, which used to be the GM automotive engineering school.”

China was part of 10 international trips Kerrigan made on behalf of MEDC in 2014.

“I was very impressed with the companies in China, and how they’re growing,” said Kerrigan. “It’s a very big market, and growing very quickly. Within the next five years, I think we’ll see a Chinese OEM in the United States.” 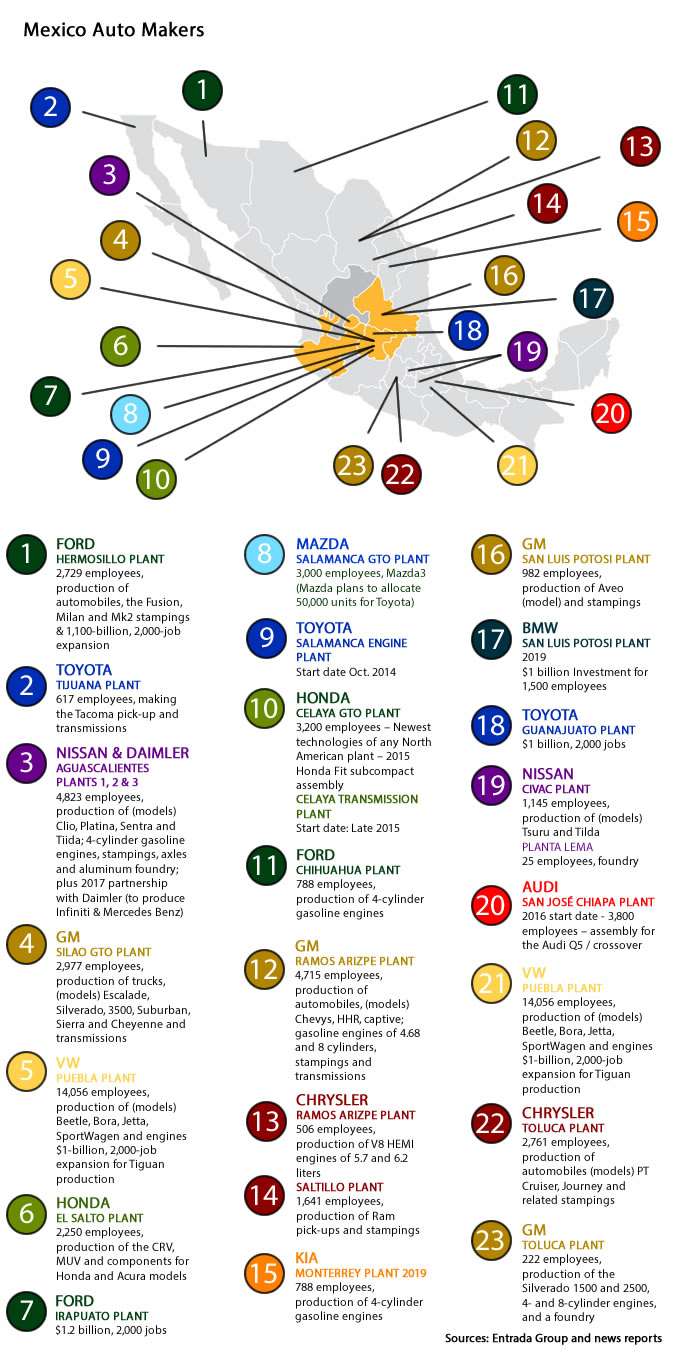