In It To Win It

North Carolina has the workforce, infrastructure and other assets required by enterprises competing to win. But will an incentives rift today affect project results down the road?

wo new Midwest right-to-work states — Michigan and Indiana — make the Top 10 Competitive States for 2014. But the Southeast still dominates the list with North Carolina taking first place, which went to Georgia a year ago. Louisiana, Texas, South Carolina and Tennessee round out the top five. Ohio’s 9th place finish in the midst of so many Southeastern states stands to reason, given its second place finish in both Governors Cup contests – total qualifying projects and total projects per capita, as reported in the March 2015 issue of Site Selection.

Much of the Top Competitive States ranking, in fact, is based on states’ new project performance in Site Selection’s New Plant Database, which tracks new facilities and expansions that meet one or more of these criteria: a minimum $1 million capital investment, creation of 20 or more new jobs or new construction of 20,000 or more sq. ft. (1,900 sq. m.).

North Carolina’s 2014 project performance didn’t win it a Governors Cup, but it was impressive nonetheless. The Tar Heel State jumped from 17th in overall projects for 2013 to 6th place in 2014. Per capita, it climbed to 4th place in 2014 projects from 7th the previous year.

Some of these projects — and many others — were made possible in part by performance-based grants from the One North Carolina Fund, which provides financial assistance, through local governments, to attract projects and stimulate economic activity. Grants are contingent on local matches.

JDIG Under the ’Scope

But can North Carolina land a truly big fish, like an auto plant? It was in the running for the Mercedes-Benz headquarters relocation project but could not compete with Georgia’s $23-million incentives package. And at press time, a new Volvo plant was more likely to end up in South Carolina or Georgia, according to many following that deal’s progress, but no final decision had been announced. A March 31, 2015, Triangle Business Journal (TBJ) article reports that North Carolina’s incentives package for the Mercedes deal was $18.2 million, most of which was from “the state’s now-depleted Jobs Development Investment Grant fund.”

How to re-fund JDIG has been a contentious issue in Raleigh this spring, where Gov. Pat McCrory and the House of Representatives are at odds with the state Senate over how to replenish JDIG. From the TBJ article: “It’s a little bit ironic, however, that much of the $23 million in incentives that Georgia is reported to be offering Mercedes come through the form of the same type of job creation tax credits that North Carolina had outlawed the year before.”

Potential investors in North Carolina shouldn’t worry long term about the future of JDIG, or the state’s ability to compete, says Chris Chung, CEO of the Economic Development Partnership of North Carolina. It’s a temporary setback.

“It’s probably part of the natural conversation all states go through at some point, whether it’s when there is turnover in the legislative or executive body,” says Chung, who took over the reins of EDPNC in January, after having led the Missouri Partnership, a similarly structured public-private economic development partnership, since 2007. “Every state takes a look at what they offer to help drive job creation and capital investment and what that suite of incentives is at the state level. They take a step back and figure out if they are invested in the right types of tools or at the right levels. Is it too much or too little? Is it the highest and best use of limited public dollars to achieve the kind of job creation results we want to see as a state?”

“Rest assured North Carolina remains a great place to open or expand your business,” said Commerce Secretary John E. Skvarla, III. “We have a superior tax and regulatory environment, highly skilled workforce and outstanding quality of life in addition to a flexible and wide variety of economic development programs to assist business with growth opportunities.”

“The sooner there can be some clarity, that’s just a better thing for the businesses we are dealing with so they aren’t feeling like they’re making decisions with any hint of uncertainty over this particular issue,” Chung acknowledges. “But I also know we are unlike some other states that have to rely much more on incentives to compensate for some shortcomings to the business climate. When you look at how North Carolina’s business climate is perceived as well as the objective data that underlie that perception, I think we’re already starting from a point that puts us far ahead of other states. But we absolutely can’t discount the importance that incentives play in the decision-making process in breaking the tie between us and other states a company may be looking at.”

Meanwhile, says Chung, North Carolina today is benefitting from some significant business-tax reform that took place over the past 12 months. “In talking to existing companies here and companies that had looked here and decided not to locate operations, one of the issues that policymakers heard was that the business taxation system was somewhat more onerous than what they faced in other states. I know personal income taxes were also pretty high at one point. But those were all addressed over the past few years as a way to make it a more business-friendly state. Now you have the corporate tax rates having gone from 6 percent to 5 percent with the opportunity to go to 4 percent and 3 percent in subsequent years, meeting certain revenue projections.

“Real tax liability will be determined on a case-by-case basis based on a company’s deductions and exemptions and so forth,” Chung notes. “But the sticker price, if you will, for corporate taxation in the state has steadily decreased, and that has put us in good favor with third-party arbiters like the Tax Foundation, which tends to be very good about assessing the strengths of each state’s tax climates. We’ve risen considerably higher as a result of some of these measured tax reforms over the past couple of years.”

As for workforce development, says Chung, “You’re looking at the state that really pioneered the practice of technical colleges and community colleges teaming up with local industry to figure out how to supply a steady pipeline of workers. That network of close to 60 community colleges in North Carolina I believe was spearheading that effort on the national level, and it was emulated by a lot of other states. That continues to be a strong part of the value proposition that the state offers — the very effective partnership between local educational institutions and the employers who benefit from the graduates coming out of those systems.” 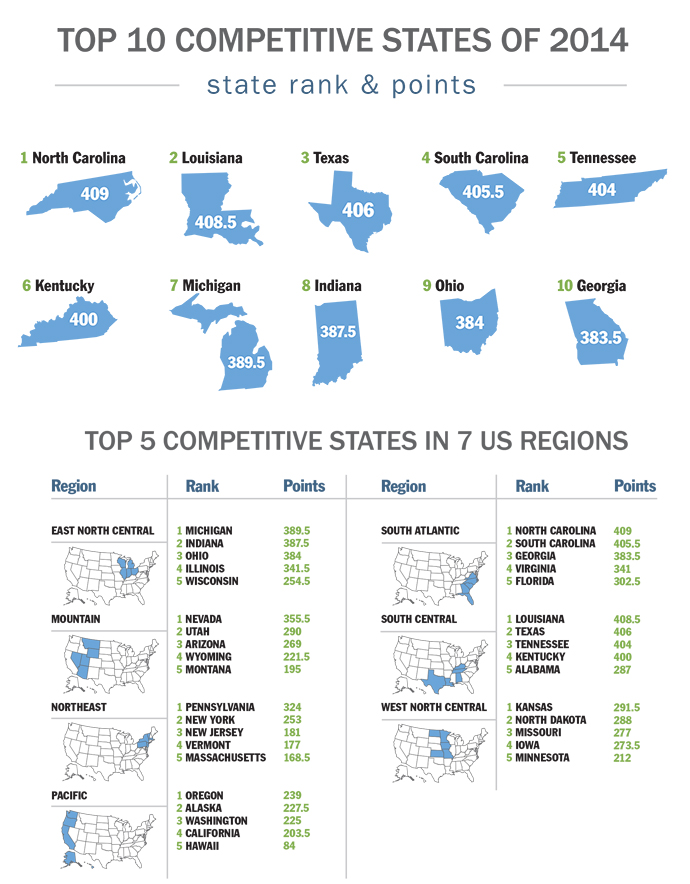