‘A Lot of Common Sense Things’

Focusing on the basics of good business keeps the Beehive State buzzing. 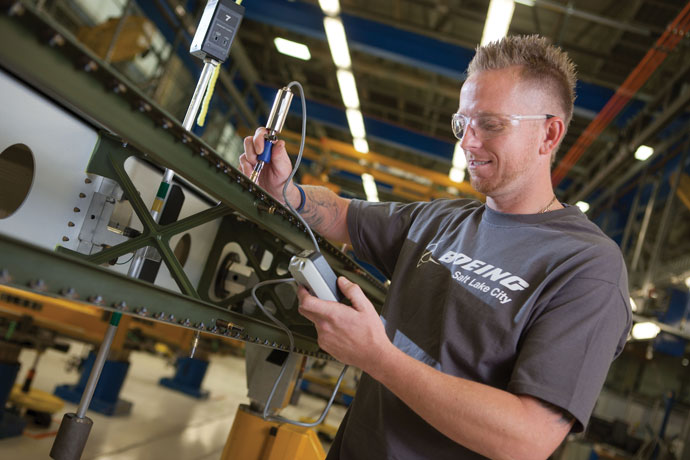 An employee tests the 787 vertical fin (part of the tail structure of the 787 Dreamliner) at the Boeing Salt Lake manufacturing Airport Facility.
Photo courtesy of The Boeing Company
by PATTY RASMUSSEN
B

oeing expansion in West Jordan, near Salt Lake City, is operating at full strength and is producing its first parts for aircraft. “We purchased the factory in West Jordan in late 2012, and have been working on it ever since,” says Larry Coughlin, general manager, Boeing Salt Lake. The first step was making test parts and cutting them up to check the quality. “Now we’re making real parts, which is kind of fun,” he adds. “In less than three years we’ve gone from nothing to a fully functioning factory in West Jordan.”

Growth comes with challenges. Like other manufacturers and suppliers across sectors, Boeing is working with the state and other partners to ensure they’ll have an adequate, well-trained supply of talent to fill future jobs. Specifically, Boeing collaborated with Davis Applied Technology College to develop a five- to six-week program to train workers in the skills needed for composites manufacturing, making airplane parts out of carbon-fiber-reinforced plastic.

“In 2014 when we started standing up operations in West Jordan, we sent two tranches [pools] of people through Davis and the syllabus we co-developed with them,” says Coughlin. “Those employees are working on our floor right now. We’re very pleased with the result, and I know Davis will do well for us in the future.”

Existing employees can also train up by taking advantage of relevant courses offered at Davis and at Salt Lake Community College on the company’s nickel. “Someone who’s now doing metal work or running a mill can take classes and get smart on composites and transfer down to West Jordan where we’re doing more composite work,” Coughlin says. “It’s been a powerful aspect of workforce education.”

Varian Medical Systems located in Salt Lake City, announced a significant expansion in August 2014. Varian manufactures X-ray tubes and flat panel detectors for all types of applications, medical and industrial — like the PaxScan line of digital detectors used to capture images and instantly display them on computer screens and the X-ray tubes used in CT scanning, mammography and radiographic screenings as well as tubes to scan checked luggage.

The expansion allows the company to become more vertical, bringing in processes currently done outside the company. “That way we control the quality, cost and availability within that integration,” says Mark Jonaitis, general manager and vice president of operations at Varian. “Probably 70 to 75 percent of our business is international. It allows us to stay cost-effective and competitive on a global scale.”

“It wasn’t a slam dunk to be here in Salt Lake City,” says Doug Carlisle, director of facilities for Varian. “We looked at some sites in Asia. In fact we had individuals in our organization who liked that idea. We looked at Nevada. We chose to expand in Utah because of the availability of reasonably priced real estate and the availability of labor.”

Bob Van Buskirk is president and CEO of weBoost, a tech firm in St. George which manufactures devices that boost the quality of cellular connectivity. He describes himself as a test case for talking about the Utah business climate. He got his start running a different public company out of Silicon Valley.

“We were a high-tech company, but once you start to grow and want to grow internationally, the constraints of doing business in California — not only the cost but regulation — became problematic,” he says. “We acquired a company in Colorado and moved there. I would say that Utah is a step beyond where Colorado was in terms of encouraging business, the level of regulation.”

“It’s a state that does a very good job of encouraging and supporting business without trying to control business,” he says. “The tax situation is very reasonable and controlled. No wild fluctuations. The business environment is very stable and positive. It’s the strongest I’ve ever seen. They do a lot of common sense things.”

Utah’s common-sense environment has helped weBoost grow in a big way. The company ships close to half a million boosters annually. All the assembly and testing is done in St. George, and they’ve had great success finding qualified workers in southern Utah.

Folks are taking notice of weBoost’s growth. “We were recently selected as the Utah Manufacturer of the Year for 2014, and that’s a big deal because there are a lot of high-quality manufacturers here,” says Van Buskirk. “For a reasonably small company, that was a prestigious award.”