Zhengzhou development is in a league of its own.

Fueled by its globally competitive labor costs, strong exports, and rapidly expanding domestic consumption, China surpassed the United States in 2014 as the world’s top destination for foreign direct investment. Much of this investment is occurring in new, large government-promoted development zones. When Westerners observe these sites, they are often struck not only by their immense scale and construction pace, but also by their modern forms and economic functions. Older industrial development areas dominated by factories producing toys, shoes, apparel and furniture are being superseded by 21st-century zones where aerospace, biomedicine, software engineering, telecommunications and advanced business services industries pervade.

No such zone is larger or arguably more economically transformative than one in central China being powered in part by government decision-makers in Beijing. This is the 415-sq.-km. (160-sq.-mile) Zhengzhou Airport Economy Zone evolving around Zhengzhou International Airport (CGO) — China’s fastest growing, about an hour’s flight from Beijing and Shanghai.

The rise of the ZAEZ, located 30 km. (18.6 miles) southeast of downtown Zhengzhou, has been mercurial. China’s central government approved the site as a 189-sq.-km. (73-sq.-mile) bonded zone and airport city in October 2010 and further approved expansion to 270 sq. km. (104 sq. miles) in November 2011. In March 2013, the central government again nearly doubled the ZAEZ’s size while formally designating it as a national strategy to bring about the economic modernization and globalization of one of the nation’s largest provinces, Henan (population 95 million), and its capital city Zhengzhou (population 8.7 million). This is being accomplished by creating an international air logistics hub at CGO and developing surrounding clusters of high-end manufacturing and high-value business services, supported by well-designed urban centers, Western-style educational institutions and green recreation areas. Together, they are forming a modern aerotropolis (airport-centered urban economic region) five times the size of New York’s Manhattan Island, to become a dynamic growth pole for central China’s economic advancement.

Working in tandem with the Henan provincial government and Zhengzhou municipal government, unmatched surface transportation connectivity has been put in place as well as a substantially expanded and modernized international airport. The three levels of government are simultaneously providing a range of investment incentives to domestic and foreign firms. 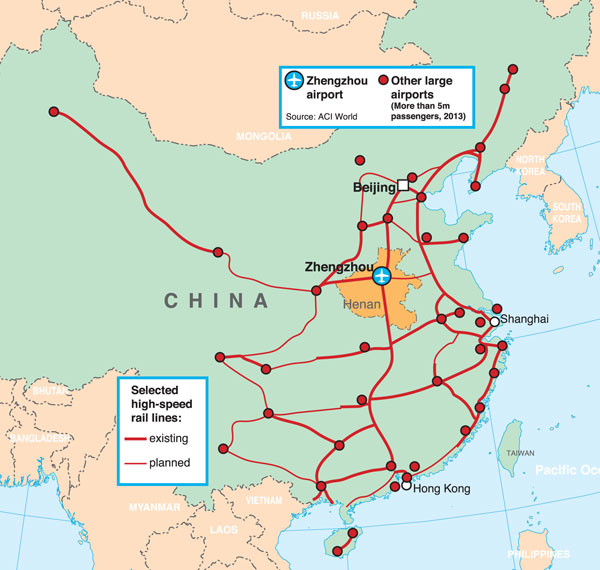 Many other high-end manufacturers in electronics, information and communications technology, biomedicine and business service sectors, such as trade and exhibition, have invested in the ZAEZ. Since 2013, 48 major industrial projects have been completed, bringing fixed real estate investment to CN¥40.1 billion (US$6.3 billion) in 2015. Value added by large-scale industries reached CN¥34.3 billion ($5.4 billion) with the Zone’s GDP growing at an annual compound rate of 49.5 percent since 2010.

Combined ZAEZ imports and exports reached CN¥37.9 billion ($5.9 billion) in 2014, which constituted 59 percent of the total value of all Henan province trade. The ZAEZ’s bonded zone ranks second in value of trade among China’s 48 free trade zones. To boost investment, productivity and economic output, the Zone’s administrators introduced best practices of the successful free trade zones in Shanghai and Shenzhen and complemented them with business-facilitation policies. Building approvals and construction permits are fast-tracked, and negotiations with investors for land acquisition and services are handled expeditiously.

To date, 155 projects have been affirmed for the ZAEZ as a whole. Between January and August 2015, 39 new investment projects were signed, estimated to have a total value at buildout of CN¥60.2 billion ($9.4 billion). As a result, fixed commercial investment is expected to rise substantially during the coming two years, as is economic output.

Driving the ZAEZ is Zhengzhou International Airport (CGO), designated as one of eight national Category 1 airports in China. CGO serves as the domestic hub for Henan Airlines and as a focus airport (secondary hub) for China Southern and Shenzhen Airlines. Cargolux Airlines has established CGO as a cargo base as well. Its strategic location at the geographic center of China’s population provides airlines with the shortest average flight times to major domestic markets.

More than 30 airlines serve 98 cities, including 28 international all-cargo aircraft routes and 17 international passenger routes. Air cargo and passenger growth have been phenomenal. Between 2010 and 2014, cargo volume expanded from 85,800 metric tons to 370,000 metric tons — an average annual increase of 40.5 percent. During the same period, annual passenger traffic expanded from 8.7 million to 15.8 million — a 16.6-percent average annual increase. CGO has been China’s fastest-growing cargo airport percentage-wise for each of the last three years and became the nation’s fastest growing passenger airport (percent growth) in 2014.

The rapid rise of CGO’s cargo and passenger volumes stimulated a CN¥18.3-billion ($2.9-billion) airport infrastructure and facilities expansion program that began in December 2012 and now is nearing completion. This includes a new, 360,000-sq.-m. (1.2-million-sq.-ft.) terminal (T2) scheduled to be operational by the end of 2015, with 77 airport parking bays and four exclusive freighter bays, along with a second runway of 3,600 m. x 60 m. and 500,000 sq. ft. of new cargo facilities. Current construction will bring CGO’s annual passenger capacity to 29 million and cargo capacity to over 500,000 tons.

Foxconn’s ZAEZ complex, which employs about 250,000, manufactures most of the world’s Apple iPhones.
Photo courtesy of ZAEZ

Current expansion also involves a 283,000-sq.-m. (3-million-sq.-ft.), multimodal ground transportation center integrated with Terminal 2. The multimodal center will have transit and parking areas for buses and taxis and underground halls for subways and intercity trains converging on CGO. To complete Terminal 2 and its connected multimodal ground transport center in a fast and efficient manner, 20,000 construction workers labored in shifts around the clock during the past two years.

The long-term airport master plan (through 2040) shows CGO with five runways, one of which will be dedicated to air cargo, four passenger terminals and additional cargo facilities. This will increase the airport’s passenger capacity to 70 million annually and cargo to over 3 million metric tons annually.

Speed, as noted, is the hallmark of the ZAEZ’s business-facilitation strategy. For international cargo, CGO offers an electronic customs clearance system with single-window declaration along with express inspection and export-import clearance. Ample immigration and security checkpoints with the latest technology facilitate international passenger movements through the terminal.

Speedy surface transportation connectivity is at least as important in today’s site selection as is extensive air connectivity. Here, Zhengzhou is particularly advantaged. The city sits at the crossroads of China’s national highway and rail infrastructure. The ZAEZ itself provides a seamless interface of aviation with major highways, intercity railways, high-speed railways and subways.

National and provincial roads serving the ZAEZ have been upgraded and expanded. These are being crosshatched with new secondary roads providing a network of highways that efficiently link all ZAEZ business sites to central China and beyond. Nearly 30 percent of China’s GDP lies within 500 km. (311 miles) of the ZAEZ.

Reinforcing its highway connectivity, Zhengzhou possesses China’s fastest, deepest and broadest rail systems. The city and ZAEZ are at the intersections of both the nation’s freight rail network and north-south and east-west high-speed passenger rail systems. The largest high-speed rail station in China is in downtown Zhengzhou with another major high-speed rail station under construction in the ZAEZ 5 km. (3 miles) east of CGO.

The intercity rail station at CGO’s new passenger terminal and high-speed train station under development just east of the airport are being viewed not only for rapid passenger movement, but also for small package express delivery and for e-commerce distribution, the latter where China leads the world.

Development happens big and fast in China. The ZAEZ is no exception. It has come a long way in just five years, transforming from a relatively isolated rural area into a globally connected modern aerotropolis. The ZAEZ’s future appears even brighter as its air connectivity continues to expand, its multimodal surface transportation infrastructure deepens and widens, and critical masses of business investment and urban support services accrue.

John D. Kasarda, PhD, directs the Center for Air Commerce at the University of North Carolina’s Kenan-Flagler Business School and is Chief Advisor to the Zhengzhou Airport Economy Zone. He may be contacted at kasarda@aerotropolisbusinessconcepts.aero or john_kasarda@unc.edu.