Reasons for moving to city centers are plentiful, but it’s people who rank No. 1. 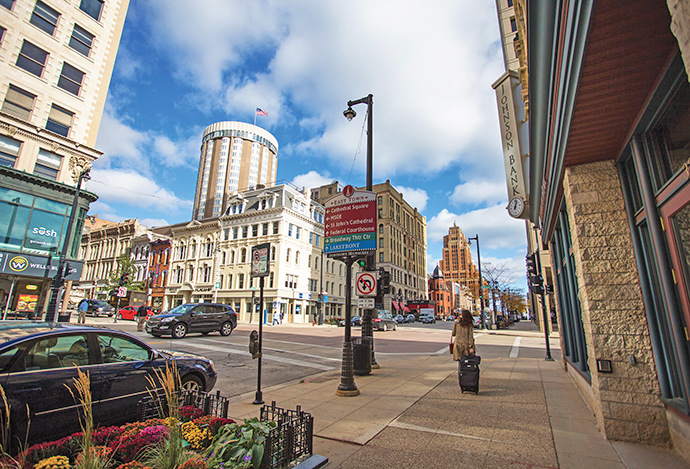 A sunny day in downtown Milwaukee.
Photo courtesy of VisitMilwaukee.org
by ADAM BRUNS

A June 2015 report from Smart Growth America — “Core Values: Why American Companies are Moving Downtown” — includes comments from leaders at more than 40 of nearly 500 companies the organization, in partnership with Cushman & Wakefield, identified as having moved operations to city centers across the US in the past five years.

“These companies’ new locations are dramatically more walkable than before,” says Smart Growth America (SGA), which has developed methodologies for indexing locations’ accessibility. The locations’ transit and bike scores also rose. Collectively, the companies included in the survey now occupy more than 31 million sq. ft. of commercial real estate in the United States. Their locations are in more than 100 cities in more than 85 metropolitan areas, from Seattle-Tacoma, Wash., to Newark, N.J. When asked why they moved, decision-makers’ answers illustrated six themes:

“We wanted to create a space that felt uniquely like ‘us,’ and downtown had a thriving energy that just wasn’t available in the suburbs,” said Jamie Naughton, chief of staff at Zappos, of that company’s move into the former Las Vegas city hall.

“Our old headquarters was a liability in recruitment. No one wanted to work at an office building that was built in the 1940s,” said Joel Reuter, spokesman for Rolls-Royce, about the company’s new HQ in Indianapolis. Moving that HQ from the firm’s manufacturing site on the city’s outskirts also made way for the company’s early October 2015 news that it would invest nearly $600 million to modernize those manufacturing operations.

“We’re in a premier location in Cleveland and it gave our business credibility. It said ‘We’ve made it.’ ”

“Our corporate attorney is across the street from us, our accountants are down the road, anybody we need to see is within walking distance. Our banker walks to our facility ... There’s a lot more efficiency down here.”

“We know our move downtown will make us a more attractive employer for our next generation of employees.”

“ There are probably 20 or 25 startups just within a few blocks of our office.”

Transit options and commute times were important, but the respondents were just as likely to talk up such non-corporate, un-matrixed factors as hipness, fun, culture, restaurants and (in the case of places such as Detroit) being part of a city’s rebirth. Affordable parking and affordable housing are two primary issues for those downtown locators. “Young workers need to be able to rent something within their budget, and that’s a challenge for a lot of cities,” said Paula Munger, director of business line research for Cushman & Wakefield, at a press conference held prior to the report’s release.

Not everybody is moving downtown. “But not too long ago, nobody was moving downtown,” said Geoff Anderson, president and CEO of Smart Growth America. In places such as Texas and Phoenix, he said, “We’re seeing a number of cases where places are trying to become more walkable — to build a downtown basically.”

Chris Leinberger, president of Smart Growth America’s LOCUS coalition and chair of the Center for Real Estate and Urban Analysis at the George Washington University School of Business, said Plano, Texas, where Toyota’s HQ is moving, is one of those non-downtowns creating a downtown environment with a town center concept. He called it “ a great example of the incredible investment in rail transit by DART. Dallas is moving very strongly toward walkable urbanism.”

While the immediate report focused on downtowns only, more than 50 percent of urban walkable development is now going to urbanizing suburbs — places such as Evanston, Ill., and Sandy Springs, Ga. The SGA team is preparing a series of reports on this phenomenon across the nation’s 30 largest metros.