The Line of Equivalence

More than big ships are aiming for East Coast landings. 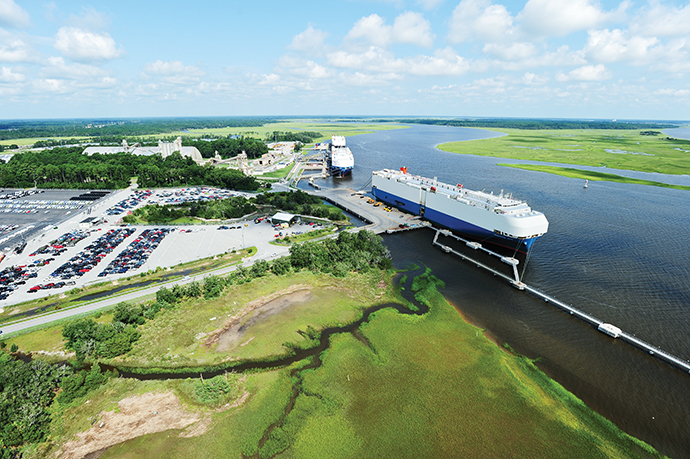 The Georgia Port Authority is currently preparing 40 acres (16 hectares) on the south side of its Colonel’s Island Terminal to be pad-ready for new port customers. The Port of Brunswick moved 680,414 cars, trucks and tractors in Fiscal Year 2015, making it the second busiest port in the nation for roll-on/roll-off cargo.
Photo by Stephen B. Morton courtesy of GPA
by ADAM BRUNS

Everything’s a trade-off in the world of business. The challenge is to identify the point of demarcation where a good deal turns for the worse, or a dim proposition grows brighter with promise.

Fresh research by CBRE and IMS Worldwide does exactly that, when it comes to figuring out where to move shipments to and from once the Panama Canal expansion is finally complete next year.

“Approximately 300 miles inland from the East Coast lies an equivalence line — where, factoring in the cost of overland freight, the choice between shipping to the East/Gulf Coast or to the West Coast is cost indifferent,” wrote Robert Kramp and Pedro Nino, Jr., of CBRE’s Americas Research group in a September 2015 report. They say corroborating research from Boston Consulting Group defines a region, “stretching several hundred miles further westward, over which East/Gulf and West coast ports will compete, valued at 15 percent of US Gross Domestic Product. (The map shows where that line of equivalence falls.)

Do you suffer from Panama Canal Expansion Fatigue Syndrome? That doesn’t make it any less important. For perspective, Kramp and Nino observe that US ports collectively handled just over 44 million 20-ft.-equivalent-units (TEUs) in 2013. The Canal has averaged 24.1 million TEUs a year on its annual average of 13,900 ships over the past three years. Yes, it’s true: The equivalent of over half the container volume of the biggest trading nation on earth has transited that sliver of water.

“Due to its age and design, however,” the CBRE researchers write, “the Panama Canal has seen less than 5 percent of the world’s total maritime cargo in recent years” because of its inability to service the sort of post-Panamax ships that are projected to be carrying more than 62 percent of global container cargo by 2030 (and already carry more than 45 percent today).

“Under a growing global trade environment that is dominated by sea transport,” they write, “the expansion will raise Panama’s route efficiency against other means and routes of transportation, including the Suez Canal in Egypt, with its recent $8.5-billion, two-way channel expansion.”

US East Coast locations are expanding too, in anticipation of the trade and logistics activity to come.

“With the opportunity to create a world-class center for commerce and trade, Sparrows Point can reposition itself from a brownfield to one of the premier deepwater logistics sites in the US,” said Gilbert. “As we move forward with the transformation of Sparrows Point, our focus will be to develop the property for maximum efficiency and value to our leaseholders by leveraging the site’s unmatched water and rail infrastructure.”

In New Jersey in October, a JV between an affiliate of The Goldman Sachs Group and Viridian Partners announced the sale of the 103-acre (41-hectare) ePort Logistics Center in Perth Amboy to Bridge Development Partners, which plans to immediately start construction on a three-building, 1.3-million-sq.-ft. (120,770-sq.-m.) warehouse and distribution park it hopes to deliver in 2016. 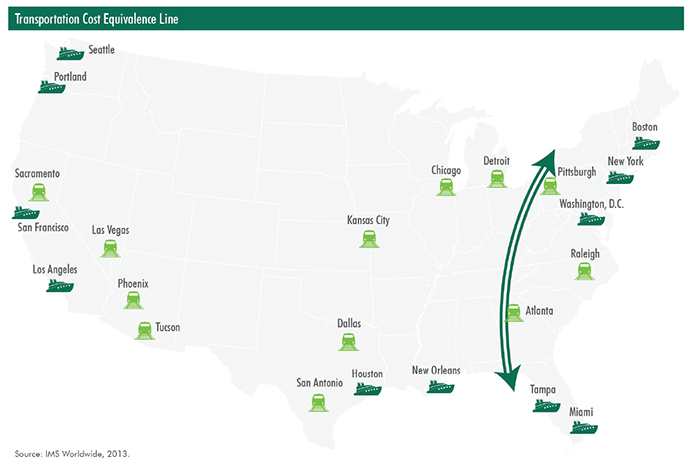 Research by CBRE and IMS Worldwide has determined an equivalence line where, factoring in the cost of overland freight, the choice between shipping to the East/Gulf Coast or to the West Coast is cost indifferent.
Map courtesy of CBRE

This property too was a brownfield, initially developed in the 1860s by the Guggenheim family, and shepherded through 18 months of remediation by Viridian and the Perth Amboy Redevelopment Agency (PARA). It’s located within the area’s port industrial submarket. Brian Fiumara of CBRE said the transaction “combined an immensely talented and experienced ‘ground-down’ redevelopment partnership, supportive local government, unparalleled port and metropolitan consumer access, and an institutional purchaser focused on the incomparable scope in the East Coast’s most mature and fundamentally strong industrial market.”

Navy Yard recently welcomed a $70-million, global R&D investment from Axalta Coating Systems, which signed a 20-year lease with Liberty Property Trust and plans to relocate 190 jobs to the site, mainly from locations in Glen Mills and Exton, Pa. The Philadelphia company had considered locations as diverse as Shanghai and Cologne, Germany, for the project, according to press reports. It hopes to double the number of employees at the new site over the next five to seven years.

Big data is as likely as big ships to drop anchor on the Eastern Seaboard.

In October, Equinix broke ground on a new data center site in Ashburn, Va., close to its existing campus there. The new North Ashburn campus site will eventually make way for five facilities that are expected to total over 1 million sq. ft. (92,900 sq. m.) of new space at completion, making this one of the largest builds in Loudoun County’s booming “data center alley,” said the company. With 10 data centers located in the local market, Equinix has invested over $1 billion in the local economy over the last 17 years.

The first phase of the data center is anticipated to become operational by 2016, and will be marked by the first express submarine cable between the U.S., South America and Europe landing at the facility, providing global connectivity to more than 240 countries and territories as well as 99.7 percent of the world’s GDP by way of Tata Communications’ global subsea fiber network.