On balance it is, and the US is a much more welcoming recipient of that investment than ever before. 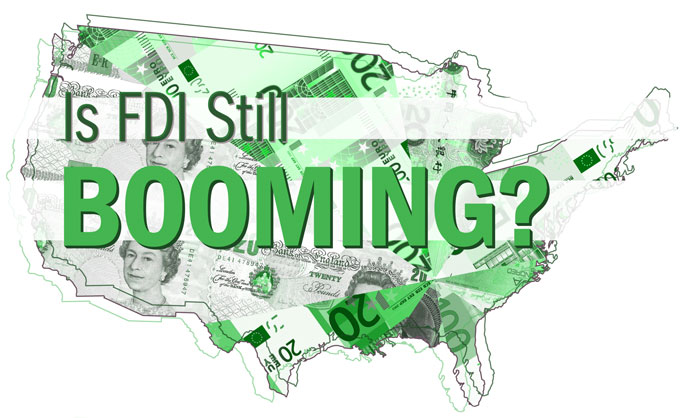 Foreign direct investment (FDI) is a popular topic in the US these days. Economic development agencies from states to small communities have boosted their international activities and are opening international offices, organizing trade missions and attending trade shows everywhere from Hannover to Hong Kong. The list of exhibiting US EDOs at a SelectUSA event in China earlier this year included everything from state agencies to representatives of cities with less than 20,000 inhabitants.

Judging by the interest of economic developers, FDI into the US must be booming. Otherwise why make the effort and spend money on international marketing, especially at a time when US companies are expanding at home and the number of domestic projects appears to be on the rise?

Can We Trust the Statistics?

The statistics can be confusing. UNCTAD’s most recent World Investment Report shows that FDI inflows into the US remained fairly constant between 2011 and 2013 and actually declined by 60 percent in 2014 compared to the previous year. However, UNCTAD’s data includes mergers and other financial transactions, and much of the statistical decline in 2014 can be explained by Vodafone’s $130-billion divestment of its stake in Verizon Wireless. 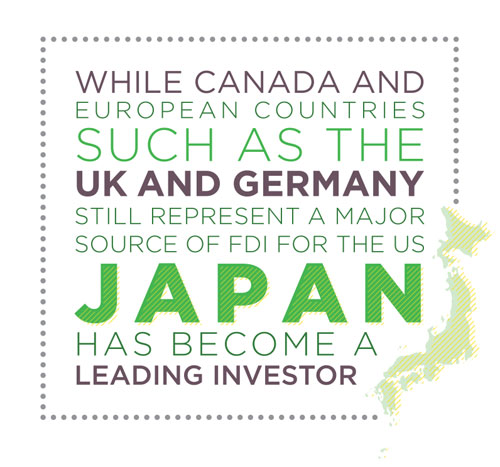 According to the US Bureau of Economic Analysis’ most recent data, foreign companies invested $236 billion in the United States in 2013, the third highest amount since 2003. However, the BEA’s data also show that the US share of global FDI stocks (the cumulative amount of FDI) has fallen from 37 percent in 2000 to just 19 percent in 2013. While some of this decline can be attributed to competition from China and other emerging markets, the European Union’s share of global FDI stocks actually rose to 34 percent from 31 percent over the same period (although the EU did admit 13 new member states during this time).

The statistics for numbers of projects and jobs are more encouraging, with UNCTAD’s World Investment Report showing that the number of FDI greenfield projects into the US increased by approximately 10 percent in 2014. In terms of jobs created through FDI, IBM’s 2015 Global Location Trends report estimates that the United States experienced a third consecutive year of FDI-related employment growth in 2014 and remains in first place globally, ahead of China.

While Canada and such European countries as the UK and Germany still represent a major source of FDI for the US, Japan has again become a leading investor. According to the BEA, Japanese investment represented almost 20 percent of all foreign investment in the US in 2013. 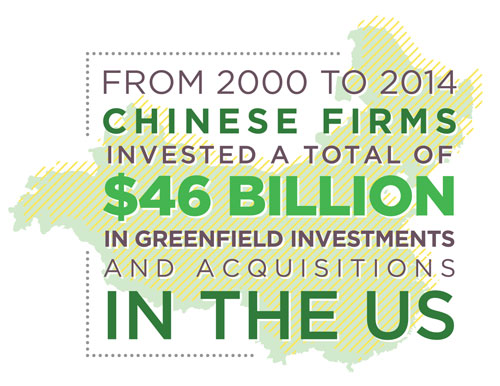 China is also becoming an increasingly important source of investment; a recent study by the Rhodium Group shows that from 2000 to 2014, Chinese firms invested a total of $46 billion in greenfield investments and acquisitions in the US, with most of this investment occurring in the past five years. Encouragingly, the number of greenfield projects during this period (566) was far higher than the number of acquisitions (346).

In terms of activities and sectors, the bulk of recent investment into the US has been in manufacturing, with chemicals (including pharmaceuticals) accounting for more than half of manufacturing FDI in 2013. Surprisingly, two sectors that are at the top of almost every US state’s target list — automotive and aerospace — both experienced significant declines in FDI in recent years, with BEA data showing that FDI inflows fell by over 90 percent in each sector between 2009 and 2013.

What’s Behind the Numbers?

While the data paint a mixed picture, experience and anecdotal data suggest that FDI into the US has been alive and well in recent years, and for good reason. The huge increase in domestic US oil and gas production triggered a wave of investments earlier this decade, with projects ranging from multibillion-dollar investments in exploration and refining to new manufacturing plants by suppliers of equipment such as valves or pipes for horizontal drilling. 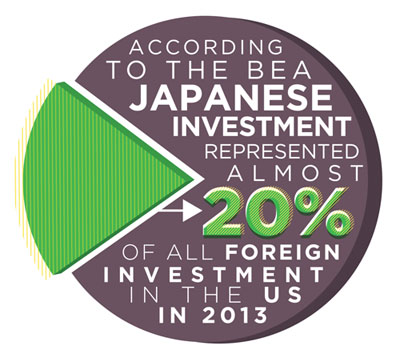 The dramatic decline in natural gas prices in the US has attracted companies dependent on natural gas as an input — notably chemicals manufacturers — as well as companies further down the petrochemical value chain, which includes everything from fertilizers to plastics.

Sustained economic recovery has also increased the US’ appeal to investors, especially as opportunities and returns in previously fast-growing emerging markets such as China, Brazil and Russia have slowed. Growing consumer spending has led to expansions in areas such as construction equipment and — despite statistical evidence to the contrary — automotive OEMs and suppliers.

In recent years, the weak dollar along with stable wage levels and other operating costs have also contributed to keeping the US attractive. More generally, the US has become a more welcoming place for foreign investors, with factors such as streamlined (and friendlier) immigration processing at airports playing a role in how the country is perceived internationally. US economic developers at the state and local level and, more recently, the federal government through SelectUSA, have also expanded their efforts to promote the country and have laid out the welcome mat for foreign investors.

All told, these developments have contributed to a healthy flow of investment to the US and hold out promise for the years ahead. However, economic drivers can shift quickly, and there is no guarantee that the US will continue to maintain its current edge in the FDI attraction game.

In some sectors, overcapacity in the US could lead to a slowdown in investment and even result in facility closures. This is already the case in oil and gas equipment manufacturing, where much of the capacity built up in recent years risks becoming idle if oil and gas production continues to drop as a result of low oil prices. Similar overcapacity may be created in parts of the chemical industry such as ethylene production, where several large facilities are under construction or in the planning stages. 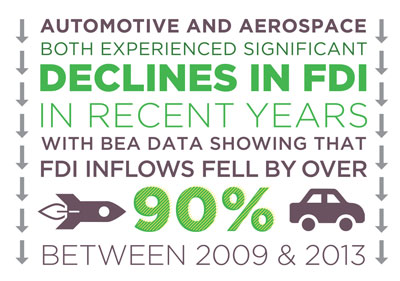 In other sectors, the US will face growing competition from countries such as Mexico, which has already surpassed the southeastern US as the location of choice for automotive investments due to its low costs, improved infrastructure and extensive network of free trade agreements.

As US unemployment continues to fall, foreign investors are also likely to pay closer attention to workforce availability, which is already becoming a constraint in some parts of the country. A strengthening dollar may also erode some US cost competitiveness.

Based on recent trends, we expect to see an increase in the amount of re-investment in the US as international companies either expand existing facilities or establish a presence elsewhere in the country following a successful first investment. For US economic developers, this implies the need to focus more on aftercare, which may be a better use of resources for locations that cannot afford a full-fledged FDI attraction effort.

Brand new greenfield investment is likely to come from different sources. A growing number of projects from Europe will probably originate from medium-sized companies that do not yet have a presence in the US, as well as fast-growing companies in high-tech fields such as energy storage, cybersecurity, data analytics, healthcare IT and smart city technology. Chinese companies should continue to represent an increased share of investment and will also generate a greater number of greenfield projects. Finally, we should also expect to witness a growing number of investments from companies from other emerging markets, including countries such as Poland, Thailand, Turkey or Mexico.

There is good reason to believe that FDI to the United States will continue to be buoyant in the years ahead. New types of investment and a greater variety of source countries will create opportunities for locations seeking to attract FDI but will also increase the need for focused FDI attraction strategies.

Reshoring:
You Can Come Home Now
Why US companies are bringing offshore operations stateside, and tools for weighing the merits of doing so.
by BARRY MATHERLY

‘The math works in America’s favor in a way that it didn’t 15 to 20 years ago,” says Michael Araten, president and CEO of K’nex Toys in Burnham, Maine, discussing the reasons his company decided to reshore. American firms are increasingly eager to bring back manufacturing, IT or service jobs they had moved overseas in the previous decade. Since 2007, over 300 companies have returned to the United States, according to the Reshoring Initiative, a resource for companies interested in bringing manufacturing and other operations back to the US. Why does the math work so well in 2015?

“In 2005, our labor cost in China was only around 10 percent and by 2012, it was 37 percent.”
— Marvin Cunningham, Long-Stanton Manufacturing, West Chester, Ohio

In June, The International Economic Development Council (IEDC) conducted a national assessment of economic developers and interviewed dozens of senior leaders of American firms about their experience with reshoring. The goal was to learn how economic development organizations can support companies in their reshoring decisions. In the process, IEDC identified six primary reasons American companies are returning their operations to US soil:

Is Your Company Next?

Could your business possibly benefit from reshoring? Use these free tools to evaluate factors that can make a difference:

Barry Matherly, CEcD, is president of the Greater Richmond Partnership and Vice Chair of the IEDC Board of Directors.