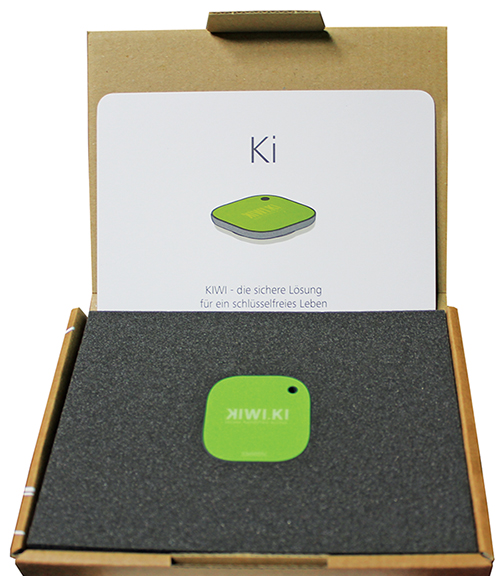 Berlin has become a magnet for entrepreneurs of all types, but especially those exploring smart, solution-driven products or services. On a rainy evening in 2007, Claudia Nagel was standing in front of her apartment building with a baby in one arm and packages in another. As she struggled to find her keys, a thought came to her: “We can do all these creative things. There’s got to be a better way to open a door.” Fortunately, Nagel didn’t leave that thought on the rainy doorstep. In 2012, she and her partners founded Kiwi.Ki, a keyless entry system using radio frequency identification (RFID), the same type of technology used in automobile locking systems and offices.

The business-card-sized Kiwi unit mounts behind the doorbell and the resident carries a transponder fob which can activate the lock from a distance of nine feet, without even removing it from the pocket or purse.

“Opening doors using RFID technology is not new,” says Karsten Nölling, vice president of sales for Kiwi. “But it had not penetrated the residential market.” It has now. The Kiwi system is already used on more than 1,300 doors in Berlin, and this summer added another 400 doors in Hamburg. Kiwi is ideal for use in cities, like Berlin, that have a high density of apartment and multifamily dwellings. They’ve already got an agreement with Degewo, a large German real estate company, to install Kiwi on 75,000 of its apartments.

More than 44,000 new companies are launched in Berlin, annually, which is one reason why — 26 years after the fall of the Berlin Wall — the German capital and other cities in the east are emerging as top locations for commercial real estate. A 2015 report released by the Urban Land Institute and PricewaterhouseCoopers ranked Berlin in the top spot among cities with the best investment prospects in the real estate market.

In 2014, Berlin posted the highest transaction volume in the city’s property market since 2007. Investment volume grew by 19 percent, year on year, and surpassed the 10-year average by 27 percent, according to a report by TLG Immobilien, a leading CRE company that focuses in the region. Office properties grabbed 40 percent of the investment volume. “Overall, the Berlin office market has developed very positively, not only in prime locations, but especially in established B-locations,” said Niclas Karoff, member of the management board at TLG Immobilien.

While some commercial investment in eastern Germany is driven by an increase in tourism — Berlin welcomed 21 million tourists in 2014, and is the third most popular European destination behind London and Paris — the region is increasingly attractive to investors thanks to positive economic trends, the rising population and falling unemployment rates. Berlin, Leipzig and Erfurt are ranked among the 10 most dynamic locations in Germany, according to a city ranking published by the Cologne Institute for Economic Research (IW Cologne) in cooperation with Immobilienscout 24, a German real estate database, and German business weekly Wirtschaftswoche.