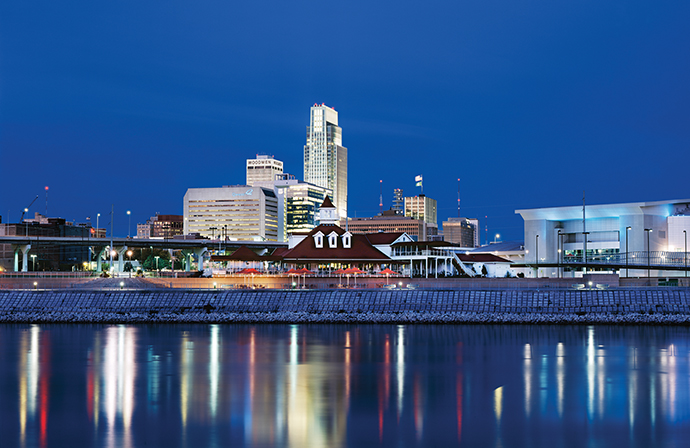 Omaha (above), state capital Lincoln and other Nebraska communities are increasingly rich in resources for start-ups.
Courtesy of the Omaha Convention & Visitors Bureau
by MARK AREND

In September 2015, Bloomberg included Lincoln – Nebraska’s capital city – in its coverage of “Silicon Prairie” metros – Midwest and other cities enjoying investment from funders of start-ups and a second look from entrepreneurs seeking lower-cost alternatives to technology centers on the East and West Coasts and elsewhere. On September 30th, Silicon Prairie News went a step further, publishing a list of “seven reasons you should pay attention to Lincoln.” Silicon Prairie News is a publication of AIM, “a not-for-profit community organization that promotes technology to empower people, enhance organizations and create brilliant communities.” Omaha, Lincoln, Scottsbluff and Central Nebraska are among AIM’s areas of expertise.

The seven reasons are these:

On the state level, Nebraska is cultivating an ecosystem for entrepreneurs that includes Invest Nebraska Corporation and Nebraska Angels, both of which seek to match start-ups with the funding and business development resources they require. Invest Nebraska is helping the Department of Economic Development implement the Business Innovation Act, passed in 2011. It administers a prototype grant program (up to $50,000), an SBIR matching grant program (up to $100,000), a two-phase research and development grant program and a seed commercialization program (matching, up to $500,000).

“Nebraska is getting a lot more attention these days, because the cost of doing business here is relatively inexpensive compared to higher-cost states,” says Mark Crawford, CEO and investment manager at Invest Nebraska.

One recent success story is Hudl, a software company providing sports video analysis tools for coaches and athletes founded by friends at the University of Nebraska-Lincoln. The company just raised over $70 million in venture capital, enabling the company to expand significantly. Such deals are helping Nebraska rise in rankings of states’ venture capital activity, says Crawford.

“Access to venture capital is a little more challenging here than in the hot spots on the East Coast and Silicon Valley, but there is available capital here,” says Dan Hoffman, Invest Nebraska’s chief operating officer. “I often encourage entrepreneurs to stay here because of the lack of competition for the limited resources. There are talented tech people, engineers – you can build a company here and your cost basis is much less. That’s a competitive advantage.”

Laura Classen is executive director of Nebraska Angels, a network of angel investors with access to a range of resources for startups in Nebraska and throughout the central US. “An investable business will always receive capital,” she says. “In Nebraska, it has certainly gotten easier to access capital over the years. Private capital is now more organized than it was. Nebraska Angels was established in 2006, and we’ve grown year over year and improved our processes and ability to evaluate and package deals and opportunities for investors so any company that is a good candidate to receive investment can do so. There are a lot more funders in the ecosystem.”