Getting Things Done – Together 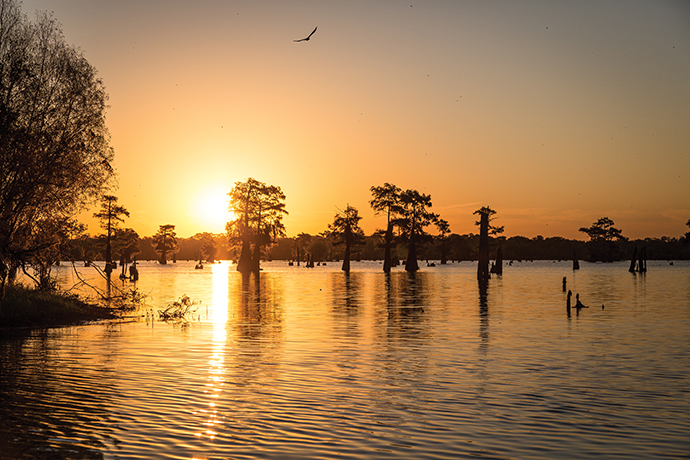 There’s a familiar saying that’s applicable to regional economic development: “It’s amazing what can be accomplished when nobody cares who gets the credit.” Civic and corporate leaders in southern Louisiana are putting that adage to the test. In February 2015, leaders from Acadia, Evangeline, Iberia, Jeff Davis, Lafayette, St. Landry, St. Martin, St. Mary and Vermilion parishes banded together to form One Acadiana, a regional economic development organization (REDO) tasked with both advocating on behalf of and promoting the business and industrial attractiveness of the region. The organization grew out of the Greater Lafayette Chamber of Commerce (GLCC), serves about 700,000 people in the region and is located in the city of Lafayette, now the third largest metro in the state behind New Orleans and Baton Rouge. 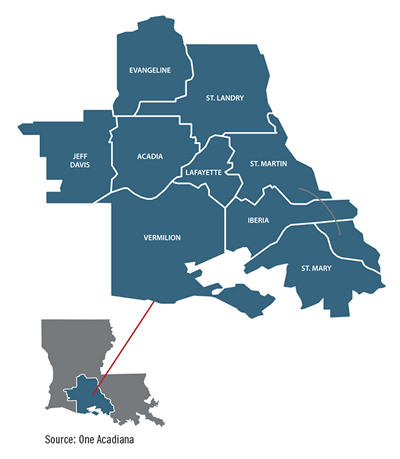 “The impetus was that socially and economically our parishes are deeply connected,” says Jason El Koubi, president and CEO of One Acadiana who joined GLCC in 2013. “As the largest business-led EDO in the area, we really needed to be regional in scope.” 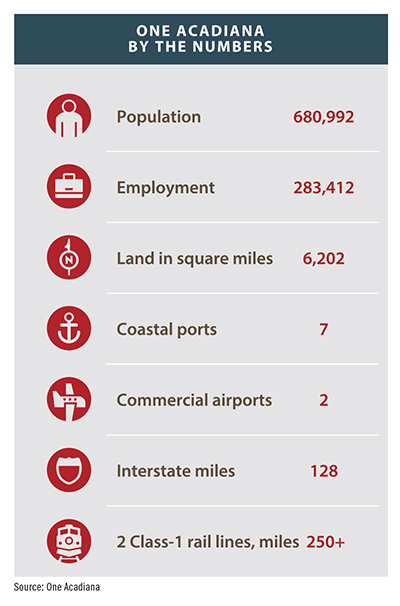 It hasn’t been a tough sell. In 2014, The Campaign for One Acadiana raised the organization’s initial $15 million funding goal thanks to corporate investors of all sizes signing on at varying commitment levels. An 80-member board helps direct the activities and serves on committees handling issues from transportation to site development to workforce. One Acadiana addresses local issues in Lafayette Parish, otherwise their focus is strictly regional. And they’re strictly business-led.

By concentrating on regional issues, One Acadiana is able to leverage the resources of nine parishes, without wasteful redundancies. “We have the capacity to do significant things, to carry out economic development activities intelligently and energetically,” says El Koubi. “It’s not just marketing and promoting the region, or responding to business development opportunities in a compelling, fast and intelligent way, we’re also looking for ways to improve our economic competitiveness by aggressively engaging on those opportunities.”

Being business-led, adds El Koubi, “gives the organization a lot of discipline in terms of focusing on things that are valuable, in terms of efficiency and not focusing on things where we’re not going to get a lot of traction.” And since economic development is often a relationship-driven enterprise, investors in One Acadiana bring their relationships and capabilities to the table as well. How has the organization brought the aspirations of nine parishes under one umbrella? “By setting priorities – recognizing we can’t do everything,” says El Koubi. “So we focus on the biggest opportunities and aggressively pursue them.”

Together with the regional business community, One Acadiana set four priorities:

The region is playing its part in growing Louisiana’s stature as a national and global economic force. According to data from the Conway Projects Database, since January 2014, more than $679 million of investment in new or expanding projects and 1,871 jobs were created in the One Acadiana region alone. The region welcomed foreign direct investment projects from Canada, Ireland and Israel. The most recent investments point to the diversity of industry and manufacturing in the region.

The oil and gas industry has always been a big player in southern Louisiana. In September 2015, Hazelwood Energy Hub announced plans to develop a $400-million crude oil storage and blending complex in St. Landry Parish. The project is expected to create 123 new jobs in the Acadiana region, with construction expected to begin in 2016 and operations commencing in 2018. 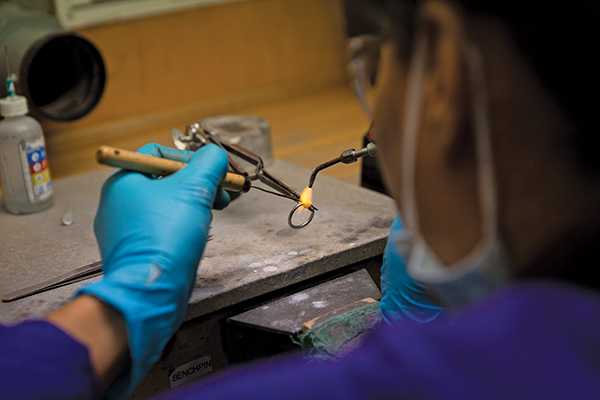 “We’ve learned how to build the wheel without experience, and it’s because of our workforce.”
— Matt Stuller, Founder and Chairman, Stuller

In August 2014, Bell Helicopter broke ground on a $26.3-million, 82,300-sq.-ft. assembly facility in Lafayette where the company will assemble the 505 Jet Ranger X aircraft. The Lafayette Aircraft Assembly Center was funded by the State of Louisiana and is owned by Lafayette Regional Airport. Bell Helicopter will lease space for its assembly operation and is investing $11.5 million in equipment and tooling. The project, which was part of a highly competitive site selection process among several states, will create 115 new jobs and will further strengthen the aviation/aerospace sector in the state.

Following a two-year, national site selection search, CGI, a global information technology (IT) and business process services firm, announced in April 2014 that the company would establish an onshore IT services delivery center in Lafayette, creating 400 new top-tier IT jobs. The company has temporary offices in downtown Lafayette, but CGI’s permanent home will be a new 50,000-sq.-ft. building which will serve as the anchor tenant at the 143-acre research park at the University of Louisiana at Lafayette (UL Lafayette). CGI expects to move into the research park facility in early 2016.

An essential piece of the CGI project is a state-funded, 10-year, $4.5-million initiative led by UL Lafayette which will triple the number of undergraduate degrees earned annually by students through the university’s School of Computing and Informatics. That growth is expected to propel the university’s computer science program to the Top 25 such programs nationally for the number of bachelor’s degrees earned annually.

“It’s not often that a community can witness the birth of a new industry sector,” says Gregg Gothreaux, president and CEO, Lafayette Economic Development Authority (LEDA), “but that is what’s happening right now in Lafayette with the technology/digital media sector. With three major technology business recruitment announcements totaling 1,000 jobs in 2014, Lafayette has firmly established itself as a technology hub — not only in the south but in the entire US.”

Even before the entrance of Bell Helicopter, aviation was a player in the region. PHI Inc., a helicopter services company working in numerous fields including oil and gas, air medical and technical services, is based in Lafayette. While a skilled workforce is necessary, often a degree is not.

“Most people in aviation don’t have four-year degrees,” says Dr. Natalie Harder, chancellor of South Louisiana Community College (SLCC). “The focus of aviation is FAA certification.” As the head of One Acadiana’s workforce development committee, Harder is helping map out the region’s workforce strategy, including creation of an International Aviation School of Excellence run by SLCC. The program would offer two-year associate degrees in aviation maintenance and pilot training. 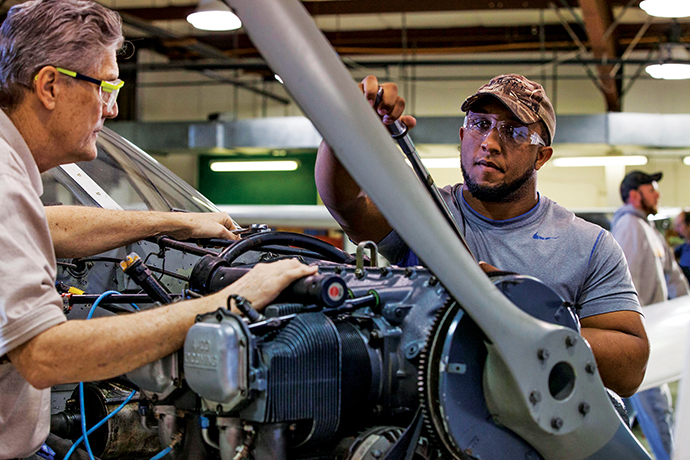 Instructor Nick Gyarfas (left) works with student Tyler Zenon in the Aviation Maintenance shop at Lafayette Regional Airport. Zenon has since graduated and is now working for Arrow Aviation in Broussard, La.
Photo courtesy of the South Louisiana Community College Office of Communications and Marketing

“We want to offer a world-class opportunity for people to come here to learn the skills that will help them support the aviation business — like non-destructive testing, avionics, body work, composites, painting/decaling, radio/radar tech — all the things that will position Acadiana’s workforce to take the jobs that are in demand, many of which are in aviation and aviation manufacturing,” says Mike Tarantino, president and CEO of Iberia Industrial Development Foundation, and local partner of One Acadiana.

The added bonus of training people for aviation is that many of the skills are transferrable to petrochemical or advanced manufacturing jobs. “Eighty-six percent of the new jobs created in Louisiana over the next 10 years are going to need an associate degree or less,” Harder says. “What’s exciting is that we’ve got a regional focus. People are recognizing that, in Louisiana, two-year colleges are at the table for economic development.”

Matt Stuller is a Lafayette native, and founder and chairman of Stuller, a precision jewelry manufacturer supplying independent jewelers and other jewelry retailers worldwide. He considers his 1,200 employees one of the secrets to the company’s success. “All of Acadiana has this desire to please,” he says. “They want to make anyone they deal with happy.” Stuller’s business peers told him he’d never be successful in manufacturing because the region didn’t have the experienced workforce. “We’ve learned how to build the wheel without experience, and it’s because of our workforce,” he says. “They are wonderful, quality people who care and love to make people happy.”

Acadiana is an intermodal region, strategically located on the Gulf Coast between the major markets of New Orleans and Houston, and right at the crossroads of Interstates 49 and 10. “Our transportation network and the way those transportation assets connect is a very important story to tell,” says Tarantino. “Here in Iberia Parish we have two very important assets — the Port of Iberia, a port that services deep water oil and gas interests in that industry, and the Acadiana Regional Airport (ARA), which is a former naval air station with an 8,000-foot military-grade runway surrounded by close to 2,000 acres of developable property with prime taxiway frontage. It’s very well positioned for commercial traffic, air cargo and a foreign trade zone.” 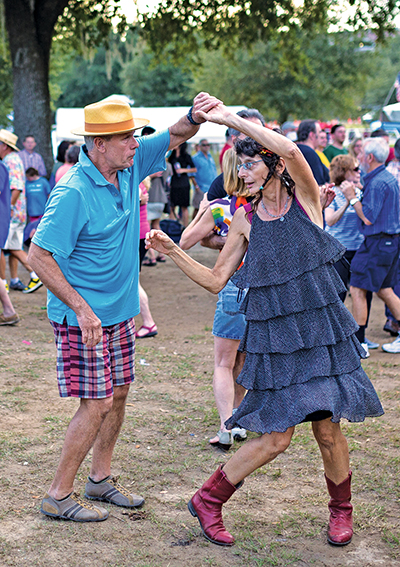 Acadiana offers the perfect balance of a successful career with a high quality of life.
Photo by James Shaw Photography

Equally important is developing property for prospects. “When business comes calling you have to be ready,” says Mark Suellentrop, general manager of Cabot Corporation’s facility in Franklin and the head of One Acadiana’s site selection committee. “We are building a portfolio of certified sites to market that will make us more competitive nationally.”

Currently there are three Louisiana Economic Development (LED) Certified Sites in the One Acadiana region — one in Evangeline parish, another in Vermilion parish and the third at Williams Memorial Airport Business Park in St. Mary Parish. “My goal is to have five sites by the end of the year,” Suellentrop adds. “We hope to double that by next year and keep the ball rolling.”

At the end of the day, economic and industrial development equals community development. “People enjoy not just working here, they like living here,” says Tarantino. “We have many generations of workforce here that could easily move on to other areas of the country. They choose to live here. We want Acadiana to be the first brand people think of when they think of that place with dynamic business opportunities. It’s a brand we know and love and we want to make sure the rest of the country thinks of Acadiana first.”

This Investment Profile was prepared under the auspices of One Acadiana. For more information, contact Anita Begnaud at  anita@oneacadiana.org or 337-408-3655. On the Web, go to www.oneacadiana.org.