Skating Out of the Dark 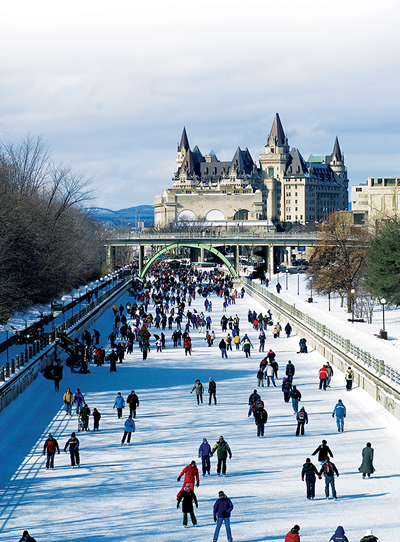 Enter Canada’s capital city after a winter sunset and you will see its citizens still skating for miles along the frozen Rideau Canal, most of them making their way by the ambient light from the city, the occasional bonfire, the moon and the stars.

The light that shoots down fiber-optic lines has driven much of Ottawa’s economic development success over the past 30 years. Some of those firms have gone dark themselves, but the sector, the talent and a heritage of ingenuity skate on.

Look no further than Swedish electronics, electro-mechanical and embedded software design firm Syntronic, which just established its first North American design center in Ottawa in December 2014. Employing 450 R&D engineers worldwide, the company maintains seven centers in Europe and 11 sites in Asia. The 30-person site in Ottawa’s well known tech cluster in Kanata is projected to grow by another 90 employees over the next five years, as the firm delivers solutions for companies in sectors ranging from automotive and transportation to medical devices and defense.

“We set up a strategy a few years back to cover three major time zones globally,” says Hans Molin, managing director and president of Syntronic Canada, restarting a location feasibility study that originally had taken place in 2001 but was postponed when the IT bubble burst. The search evaluated Montreal, Toronto, Vancouver and Ottawa. Ongoing US projects made San Diego a candidate as well. But a primary location trigger was Syntronic’s wish to be close to where customers maintain their own R&D. Not only did the majority of its customers have R&D in Ottawa, they also displayed more interest. “We ended up with Ottawa as our best choice,” Molin explains, in part because of the ability to reach into the US market.

Why not just go directly to the US then?

“Mainly because of the skill sets available here, and the history here in Ottawa in the field of wireless — that is one of our core competencies,” explains Molin. Even after the fall of Nortel, Ottawa welcomed other investments from top-shelf corporations such as Ericsson, and still is home to 95 percent of Canadian telecom R&D. The area boasts 400-plus telecom and wireless companies, and an ICT talent base of 35,000.

Syntronic received a referral to Invest Ottawa, the local economic development organization, from a potential client. “That was one of the smartest moves we made,” Molin says. “You need access to lawyers, accountants, business people and bank people. We got tremendous support from Invest Ottawa in terms of hiring people, we got the opportunity to use their office space, and we got a good overview of potential customers in the market.”

Within the space of a week during the summer of 2014, Molin had found office space, filed all the necessary paperwork, hired 30 people (from among 100 interviewed), found a home in Kanata and even enrolled his children in schools, ballet lessons and, of course, hockey.

“I’ve done this before, in Malaysia, China and other parts of Europe,” says Molin. “When I try to compare the different sites or different incentives, I would say Canada would tie with Malaysia in terms of [ease in] setting up a company.”

From a personal perspective, however, it was more difficult in Canada, Molin says, noting how it took a letter from Ottawa Mayor Jim Watson and the CEO of Invest Ottawa to help fast-track a work permit. “It takes a lot of time, especially if you’re trying to do that during July and August,” Molin says. It also took an inordinately long time to establish credit and to be approved for a corporate credit card. “Syntronic is rated Triple A and is financially strong, so we have the funds to do that investment ourselves,” he says, “but other companies might have some issues.”

Compensating for those headaches have been continuing support from Invest Ottawa, including opening up doors to meet more potential customers, and tax credits from Canada’s federal Scientific Research & Experimental Development tax credit program.

Access to talent from such respected universities as Carleton University and the University of Ottawa helped too. The area’s five post-secondary schools, which carry out $320 million in R&D annually, are part of an institutional infrastructure that includes 44 federal research labs (spending C$6.2 billion annually) and 130 embassies and consulates. 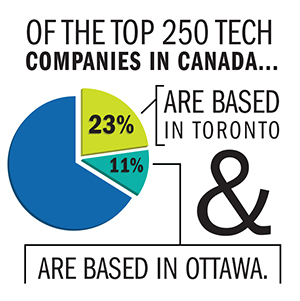 It also includes the Centre of Excellence of Next-Generation Networks (CENGN), a consortium of industry, academic and research leaders dedicated to accelerating the commercialization of next-generation communications solutions. The organization is funded by $15 million over the next seven years from the Canadian government, and $45 million in funds and in-kind technology from industry partners, all of whom want to help nurture innovation from small and medium-sized businesses that have sprung like spring flowers from the region’s sophisticated talent base.

“At one point there were 20,000 engineers here at Nortel — a lot of these people have stayed in the area,” says Ritch Dusome, a former Cisco site lead in Ottawa who today serves as president and CEO of CENGN, whose physical nexus in Ottawa benefits from a cluster of heavy-duty data center and telecom capacity, including an Ericsson facility under construction that will be the size of 12 football fields.

But it’s the players in the field that matter most.

“I’m looking for talent pool, acquisition and partnership with other CENGN members and with the SMEs,” says Chris Bachalo, chief technology officer in Canada for California-based CENGN member Juniper Networks, whose new CEO Rami Rahim just happens to be a Canadian citizen. “My end goal as CTO is to recreate what Ritch did at Cisco, and leverage the ecosystem in Canada. I feel Juniper could benefit from the ecosystem for SDN/NFV [software-defined networks and network functions virtualization] technology here in Ottawa and create a stronger presence here and in Toronto. We’re talking to the Ontario government about incentives.”

Bachalo says nine out of 10 companies in the tech space would identify access to the right skill sets as the biggest issue standing between the old ways of doing business and the new world order. The new skill set “leans much more towards software and programmability,” he says.

Top End of the Curve

Some of that talent may come from incubators such as the LSpark incubator at Queen’s University in Kingston, or from Wesley Clover, an investment management arm of Mitel founder Terry Mathews’ corporate empire. Home to 44 companies in spring 2015, Wesley Clover, located in the Kanata Research Park that Mathews’ companies basically built, has helped launch 112 companies overall, and has only had to shut down six. Not a bad track record.

“His passion to this day is to start companies and grow them,” Steve Langford, Wesley Clover’s vice president of marketing, says of Mathews, who among other achievements sold Newbridge Networks to Alcatel-Lucent for a tidy $8 billion.

Juniper’s Bachalo says it’s a significant time for conversion to new systems such as SDN/NFV.

“We’re on the precipice of significant adoption,” he says. “We’re hitting the top end of the hype curve, with customers starting to invest in the technology, and looking at launching new services.” How it plays out for Juniper depends on how it wants to allocate resources among its HQ in Sunnyvale, Canada and elsewhere.

“I’d love to see maybe 1,000 employees here in Ottawa,” says Bachalo. “When I talked to my company president about expanding in Canada and said there were incentives, he said, ‘That’s good, but the most important thing is the talent pool.’ ”