Maumee Bay State Park in Oregon, Ohio, takes recreational advantage of the same stretch of Lake Erie that offers such a powerful asset for the energy sector.
Photo by Amy Lynn – Images on the Bay
by ADAM BRUNS

Founded on densely wooded land once known as the Great Black Swamp, the City of Oregon’s heritage is replete with investments in water and wastewater infrastructure. In addition to railroad and port operations built up over the years, that’s what originally drew the BP and Toledo Refining Co. refineries to the area in the early 20th century. It was also crucial to the city’s success in fighting off a partial annexation in 1958, when Oregon adopted the motto “City of Opportunity.”

Of the eight gold-level investors in the Oregon Economic Development Foundation in Northwest Ohio, three are major energy players. Central to their message to outsiders is this: There’s room for more.

Specifically, 700 acres of room, “zoned industrial, waiting for you,” says the Foundation, which serves the needs of Lucas County’s largest suburb. Though the city remains focused on target sectors that include manufacturing, logistics and healthcare, energy has been the lead dog for 100 years — and figures to be for years to come.

One of those major players, BP-Husky Refining, has operated on its parcel near the mouth of the Maumee River since 1919. Today the site, operated by BP on behalf of a JV with Husky Energy, converts crude oil into almost 6 million gallons of product each day. With a processing capacity of 160,000 barrels of crude oil daily, the facility’s day-to-day operations are driven by about 600 BP employees and an equal number of contract workers.

The JV serves the Midwest and nearby Canadian markets. Since 2010, the JV has invested nearly $1 billion in the refinery.

Another major player, Toledo Refining Company (TRC), a subsidiary of PBF Energy, is located on a 282-acre site and processes light, sweet crude, with a throughput capacity of 170,000 barrels per day. The majority of TRC’s crude is delivered via pipelines that originate in both Canada and the United States. Toledo produces a high volume of finished products including gasoline and ultra-low sulfur diesel, in addition to a variety of high-value petrochemicals. Since PBF Energy acquired the refinery from Sunoco in 2011, the company has added additional truck and rail crude unloading capabilities that provide feedstock sourcing flexibility for the refinery and enable Toledo to run a more cost-advantaged crude slate. With over 500 employees and its additional onsite contractors, TRC is a major economic engine for Northwest Ohio.

“Oregon, Ohio, is a great place to do business,” says Mark Dangler, president, BP-Husky Refining LLC and Refinery Manager. “The infrastructure — pipelines, water access, railroads and ample utilities — provides the foundation for our successful operation. The local community and the State of Ohio are strong supporters of our business and a major factor in our success. The local community and business agencies are very balanced and supportive of our business objectives. There is a predictable, reliable process for permitting, which is beneficial to any business.”

The reliability factor extends to those hundreds of workers, whom Dangler describes as highly skilled. There are several reasons those skills abound. Both refineries partner with the University of Toledo College of Engineering’s co-op program. 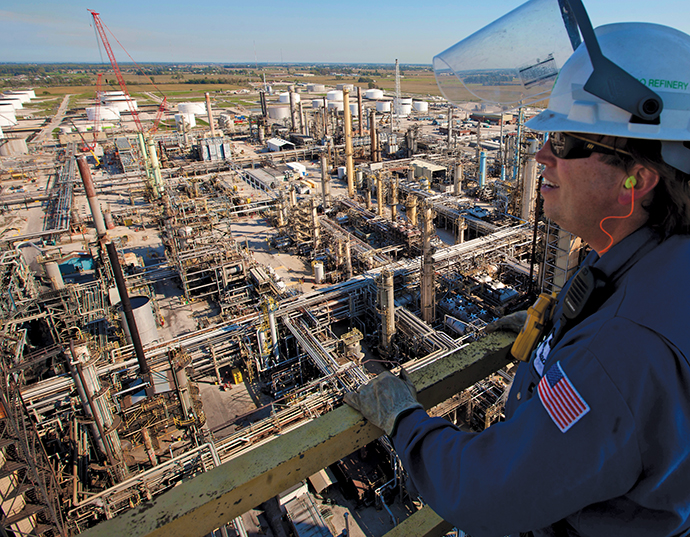 Mike Stack, BP-Husky safety advisor, looks over the JV’s refinery in Oregon, Ohio, situated on a 571-acre site just east of Toledo on Maumee Bay, and in continuous operation since 1919.
Photo courtesy of BP-Husky

“Toledo Refinery Co-Ops are hired on a rotation-by-rotation basis to gain practical, on-the-job experience,” says Dangler. “They are mainly individuals pursuing degrees in engineering — primarily chemical engineering. The students benefit from real-world training, and BP benefits from having access to a larger pool of experienced candidates. Upon graduation, many co-ops are offered full time employment.”

Oregon is not short on talent pipelines: In addition to UT, Lourdes University, Owens Community College and Bowling Green State University are all within a half-hour’s drive.

“Our own skilled-labor workforce is supported by Northwest Ohio Building Trades, which provides craftsmen and craftswomen from 18 different craft lines to support refinery operations,” says BP’s Dangler. “On a daily basis, the refinery has approximately 600 contractors working at our site. During large maintenance projects, that number can increase to up to 3,000.”

The refinery also benefits from FirstEnergy’s 136-MW Bay Shore power plant, where a fluidized-bed combustion boiler is fueled by 1,400 tons of petroleum coke byproduct per day from the refinery, helping the power plant reduce emissions.

Yet another progressive energy project is taking advantage of opportunity, as the 869-MW natural gas-fired combined-cycle power generating plant known as Oregon Clean Energy Center (OCEC) is under construction within the Cedar Point Development Park Foreign Trade Zone, and adjacent to 345-kV transmission lines. Natural gas for the OCEC will be delivered via yet another addition to the area’s extensive pipeline infrastructure: a new 24-inch pipeline from the Maumee hub. Water will be provided from Lake Erie by the City of Oregon.

The $860-million project — expected to begin commercial operations by July 2017 — will increase annual labor income by $3.9 million in Oregon and by an additional $1.6 million in other parts of Ohio, while also producing an additional $15.4 million in state and local tax revenue. It also replaces generation from several aging coal-fired power plants in the region that are being retired.

Lindsay Myers, executive director of the Oregon Economic Development Foundation, says the city’s partnership with the Toledo Lucas County Port Authority — half of whose operations are located in the city — is crucial. The Authority’s Ironville transload facility moves crude to trains. And Norfolk Southern and CSX have numerous tracks that serve Oregon’s industrial companies. “The rail and port are major reasons why we are able to be so successful in the energy sector,” she says.

With the host of products and pure power coming from the area, tiny Oregon is nothing less than Ohio’s energy hub — with an influence that stretches as far and wide as the Lake Erie horizon.

This Investment Profile was written under the auspices of the Oregon Economic Development Foundation. For more information, contact Executive Director Lindsay Myers at 419-693-9999 or lmyers@oregonohio.com, or visit www.oregonohio.com.