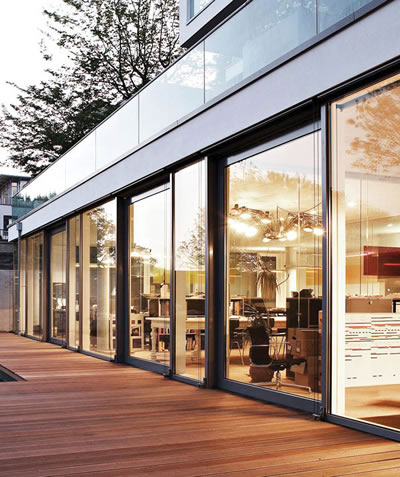 Why an innovative manufacturer of windows and doors chose to make a home in Massachusetts.

It wasn’t too surprising when Menck Windows snagged the 2015 Innovator of the Year Wooden Globe Award from the Woodworking Machinery Industry Association. The surprise was that the company won the award after just a few months of operation. “It was very nice recognition that came very quickly,” said Menck Windows’ CEO Todd Bachelder. “I think it was a result of the new product technology we’ve brought from Germany but perhaps even more importantly, the production technology we’re using allows us to get this work done in fewer steps.”

Menck Windows is a US company formed through a joint venture between a couple of friends, Rolf Menck and Bodo Liesenfeld, who just happen to manage a couple of rather large, successful companies: Menck Fenster, a 130-year-old custom window and door manufacturer in Hamburg, Germany, and Liesenfeld International, a private investment firm. The company, which produces European-style tilt-turn windows and doors, leased 75,000 sq. ft. (6,967 sq. m.) of a vacant 150,000-sq.-ft. (13,935 sq. m.) building in Chicopee in December 2013 after a search that took them throughout the New England states.

The original plan was to locate in northern Vermont, says Bachelder, who joined the project in 2013. “It became clear fairly quickly that Vermont wasn’t the right partnership for a variety of reasons,” he says. “By late summer 2013 and into that fall I was searching, looking at facilities, talking to funding sources.” For a number of reasons, the search began to center on Massachusetts, particularly the western part of the state.

“We got a strong reception from several key partners,” Bachelder says. “MassEcon helped us find sites. MassDevelopment was receptive to some industrial development bond financing, and tax-exempt financing. The City of Chicopee and the Massachusetts Office of Business Development (MOBD) partnered on a couple key tax incentives that together were worth about $1 million — about $250,000 in property tax rebates from the city and $750,000 in Economic Development Incentive Program (EDIP) tax credits, refundable tax credits the state and the economic assistance coordinating council grant to companies looking to expand or relocate.”

Lower costs associated with doing business, as well as the lower cost of living, were selling points of the region, as were the logistic and geographical assets. “We sit at the crossroads of Interstates 90 and 91,” says Bachelder. “One of the ways architects and developers get LEED certification is by sourcing products within 500 miles. If you draw a 500-mile radius around the area where we’re located in western Massachusetts, you’ve got 90 million people. You’re up into Canada, out west as far as Ohio and as far south as Washington, DC.”

Finally, Bachelder was impressed by the region’s manufacturing lineage. “There’s a strong history of manufacturing, including CNC precision manufacturing,” he says. “As a result we have the educational infrastructure, like community colleges, that are focused on training this next generation of CNC operators.”

Most of 2014 was spent getting the manufacturing space properly outfitted, ordering equipment and selling and marketing the product. “We imported from Menck Fenster to get us going in terms of market introduction,” says Bachelder. “We’ve been manufacturing product here for the past three to four months. I would expect by the end of the year, two-thirds of what we sell will have been produced here. Over the course of the next couple years we’ll be making everything here.”

That’s music to the ears of Susan Houston, executive director of MassEcon, a private-sector economic development partner actively promoting the Commonwealth as location choice for companies looking to expand and grow. It would be easy to rely on the economic engine of Boston, but Houston is firm: “We represent all regions of Massachusetts. For us it’s something of an educational process for prospects who are considering Massachusetts as a place to do business.”

A key tool for educating prospects on what the state has to offer is the agency’s ReadyMass 100 initiative — a database of ready-to-go properties throughout the state. The Menck site in Chicopee was part of the database. “Recently we’ve had inquiries from large prospects who have identified Massachusetts as their interest, and might identify Boston because the city is a brand,” Houston says. “But the fact that there are properties within 50 miles of the city that are viable makes it an easier sell.” Other companies that found locations through ReadyMass 100 in 2014 include pharmaceutical company Baxter (Cambridge) and online retailer Amazon (Stoughton).

“We recently got Boston to Tel Aviv, to Shanghai and Beijing, and Istanbul,” says Houston. “It’s fairly major for us because it’s easier to get in and out of Logan than JFK International Airport in New York City.”

The connection to Tel Aviv is particularly important in light of Boston’s growing cybersecurity hub. “We really had to compete for that,” she says. “Airlines don’t place their flights lightly. On the Israeli connection, water and cybersecurity were areas that they have an excellent and established US presence in Boston.”