Even in the midst of a drawdown, military installations help regional economies soar. 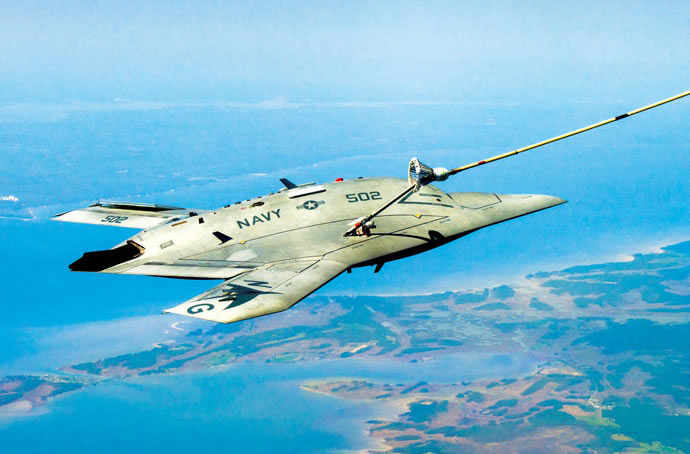 The X-47B is part of the unmanned aircraft program at NAS Patuxent River in St. Mary’s County, Md.
Photo courtesy of U.S. Navy
by ADAM BRUNS

California-Lexington Park, Md., sounds like a name made up out of thin air. In one way, it is.

There it is, in amongst the Dallas-Fort Worths and Bostons of the world, ranked No. 12 in Policom’s 2015 Economic Strength Rankings, up from 19th last year. The annual report on all 381 US metro areas is based on 23 factors such as wages, per-capita income; growth in small business, construction and retail; and indicators Policom labels as negatives, such as per-capita Medicaid assistance and welfare.

Google it, and you’ll land not far from where the Potomac empties into Chesapeake Bay, at Naval Air Station Patuxent River (“Pax”). Conducting over 200,000 air operations annually, the installation hosts more than 50 tenants including three services, federal agencies and private industry. All told, some 22,000 people work there. The Federal Reserve Bank of St. Louis reports per-capita personal income in the area, in St. Mary’s County, has grown from $18,931 in 1990 to $47,677 in 2013, good enough for 47th in the US, having climbed by more than $11,000 since 2005. And population growth from 2007 through 2012 (to 110,000) was more consistently positive than every Mainline metro area but DC itself. 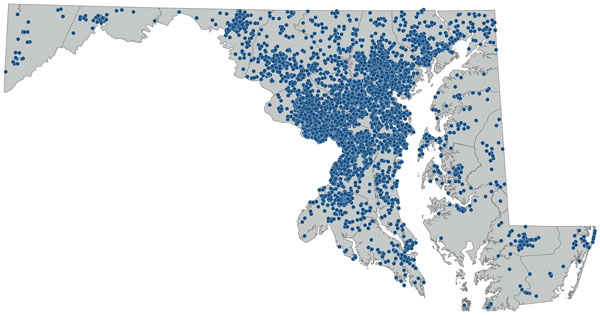 The dots on the map above represent each of the 11,200 defense contractor establishments in Maryland in 2012.
Source: EAGB

In addition to the billions of dollars associated with unmanned aircraft development at the base, the enhanced use lease program holds promise, as private developers pursue construction of new, badly needed facilities on Pax property that will then be leased to the Navy.

Analysis of FY2012 released this year by the Maryland Dept. of Business & Economic Development and the Regional Economic Studies Institute at Towson University found that the base’s economic impact had reached $7.5 billion. The report estimated the overall impact of the state’s 15 military installations at 350,411 supported jobs, $23.9 billion in total wages and $51.8 billion in total output — 15 percent of the entire state’s output in 2012.

Virginia has a similar story to tell: A 2014 study of 2010 data found that military spending accounted for 44 percent of federal spending in the state, and that defense spending ($59.6 billion) was equivalent to 13 percent of the gross state product.

According to the 2015 economic strength rankings from Policom, the Mid-Atlantic’s other metros have been pumping their own iron lately. No. 1–ranked Washington-Arlington-Alexandria, D.C.-Va.-Md.-W. Va. has been in the top three since 2004. And Baltimore-Columbia-Towson, Md., is No. 22, after having ascended to No. 12 last year, its highest ranking ever, from as low as 56th as recently as 2010. Other top performers along the Mid-Atlantic include:

Tom Sadowski, CEO of the Economic Alliance of Greater Baltimore, is familiar with the importance of military operations to his region’s economy, having represented Aberdeen Proving Ground in Maryland’s Harford County during the 2005 Base Realignment and Closure (BRAC) process.

“The technology platform that was added at Aberdeen has taken it to a $15-billion installation, whereas prior it was a $3-billion installation,” says Sadowski, referencing the combined value of government contracting and mission operations funding. “Aberdeen supports about 46,000 jobs, Fort Meade over 144,000 jobs.”

After the nation’s capital, Baltimore is the largest federal government hub in the US, with over 73,000 residents employed by the Federal Government. Greater Baltimore boasts the highest concentration of state government employees in the 25 largest metros. Greater Baltimore is home to some of the nation’s most critical agencies, including the NSA, Social Security and the US Cyber Command at Fort Meade, which in 2013 announced its planned expansion from 900 to 4,900 troops and civilians. The Washington-Baltimore region has a larger base and higher concentration of IT professionals than Silicon Valley or Boston.

The Baltimore-Washington corridor is widely regarded as the epicenter of cybersecurity, with over 13,000 jobs available in Baltimore alone — a number expected to grow as government contracts for information security climb to an expected $14 billion by 2017. Of the $20 billion in sales from Greater Baltimore–based government contractors in 2012, 23 percent was from computer/software and data processing, and 15 percent came from engineering and design services. Meanwhile, the number of establishments in aircraft and aerospace has grown from 30 to close to 100.

Sadowski says one of the driving forces behind the 2005 BRAC consolidation — the retirement eligibility of more than half the workforce at places such as Fort Meade and Aberdeen — has become an area strength, with many retirees going to work for contractors or becoming contractors themselves. “They’re still in the family, if you will, but in some other supportive role,” he says. “At the same time, there’s been a tremendous infusion of young talent and young minds. There are 80 to 90 distinct missions at both Aberdeen and Fort Meade. So there’s a lot going on.” 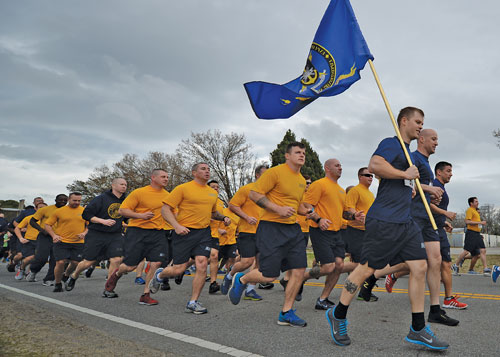 As for government spinoff more generally, Sadowski says additive manufacturing, cybersecurity and mobile security are blooming fields, as is healthcare IT, sparking the growth of such firms as Red Owl Analytics.

Sadowski says area leaders thought the head count from BRAC would be higher than it is, and are weathering the impact of defense cuts. But the seeds are planted and that growth will be realized, he maintains, pointing to the Edgewood peninsula near Aberdeen as a positive example, with growth in bio- and chemical engineering, medical devices and 3D modeling.

“We lament the reduction in federal spending in a number of respects,” he says, “but one positive outcome is that necessity breeds invention. There is a trend of commercialization and new business starts. It’s been a tremendously positive wave.”


‘Place All of Your Belongings in the Bins’

As the nation’s capital region waits to hear where the FBI is moving its HQ, there are other influential agencies moving their acronyms around.

In early August, the GSA (General Services Administration) announced that the TSA (Transportation Security Administration) would move its national headquarters to Alexandria, Va., altering the commute destination of approximately 3,800 HQ employees who currently work at four different offices in Arlington, Reston, Springfield and Ashburn, all in Virginia.

The agreement with Prudential-owned Eisenhower Real Estate Holdings, brokered by JLL on behalf of the government, saves taxpayers more than $95 million over the 15-year lease term, said the GSA in a release. “The new lease agreement allows TSA to consolidate four locations into one at a rental rate and utilization rate that will ensure the agency is more efficient and effective in executing its mission,” said Darren Blue, Public Buildings Service commissioner for GSA’s National Capital Region. The original RFP was distributed in July 2014. According to GSA documents, the scope of the search area for the consolidation included “Fairfax County, Arlington County, and the City of Alexandria in Northern Virginia, at a site within 2,640 walkable linear feet of a Metro station.” 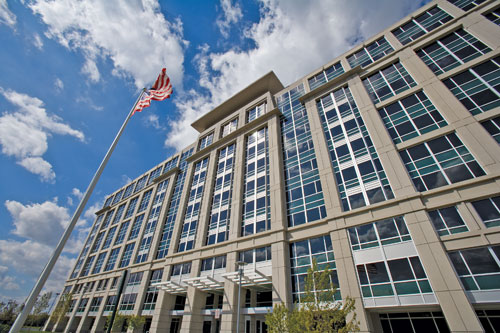 Victory Center, the location for TSA’s newly consolidated national headquarters, has been vacant for nearly a decade, but its proximity to transit helped cinch the deal.
Photo courtesy of Alexandria Economic Development Partnership

From Vacant to Bustling

Alexandria leaders plan to create an Eisenhower West Victory Center Redevelopment District. Real estate improvements made for TSA would receive up to $1.5 million in annual partial real estate tax abatement, projected to be a $23-million tax savings value over the initial 15-year lease. The Victory Center land and existing building, which has been vacant for the last 10 years, would remain fully taxable. The city estimates the net new tax revenue over the same 15-year period at $25 million, even after the partial tax abatement. The creation of the new tax district is subject to public hearing and approval by City Council.

With the move, TSA will become the anchor of the west end of the Eisenhower Avenue corridor, a commercial mixed-use neighborhood served by the Van Dorn Metrorail Station and two others. The TSA will join the National Science Foundation headquarters, currently under construction, and the U.S. Patent and Trademark Office complex, both located to the east on Eisenhower Avenue in the Carlyle neighborhood. During the first half of 2015, leasing across the Washington region was up by 16 percent, says JLL, with occupancy gains during Q2 the strongest since Q4 of 2010, and Metro proximity a major factor.

Economic projections show that in addition to the permanent jobs moving to Alexandria, the headquarters relocation will spur more than 640 temporary jobs to construct the new facility. The 3,800 new jobs represent a 4-percent increase in Alexandria’s overall workforce, and occupancy of the building will result in a 3-percent decrease in the city’s office vacancy rate (from 16.5 percent to 13.5 percent). Over the initial 15-year lease, the headquarters is expected to generate close to $16 million each year for Alexandria’s economy.

“The city is working on a small area plan for Eisenhower West that encourages new investment, redevelopment and business activity,” said Mayor William D. Euille, praising the work of city council, staff and the Alexandria Economic Development Partnership, as well as Prudential and its team. “TSA will serve as a catalyst, and will add a daytime office population and on-site retail activity to this developing market.”