The global market for plastics and chemicals is going through the roof. 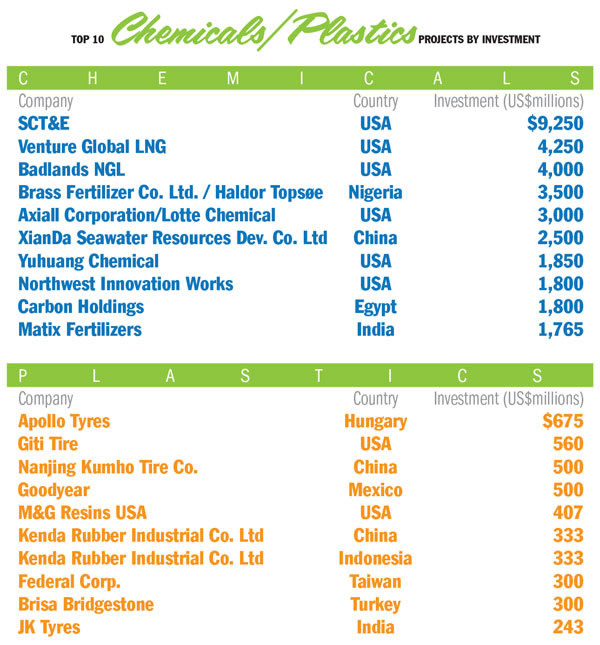 The plastics and chemicals industries provide a solid one-two economic punch according to two recently published reports. A new study by Grand View Research, Inc., says the global plastics market should reach $654 billion by 2020, while the recently released edition of the Guide to the Business of Chemistry from the American Chemistry Council calls American chemical manufacturing “an $801 billion enterprise providing 804,000 high-paying jobs.” The top 10 chemical and plastic manufacturing projects in Conway’s New Plant Database record investment figures of $1 billion or more – and in many cases much more.

“Growth of major end-use industries such as packaging, construction and automotive, particularly in emerging markets of China, India and Brazil, is expected to remain a key driving factor for global plastic demand,” says the Grand View report. “In addition, the need for high performance thermoplastics from the automotive industry in order to reduce the overall vehicular weight to gain fuel efficiency is also expected to have a positive influence on market growth.”

International flexible packaging supplier InterFlex Group completed a year-long capital investment plan which included equipment acquisitions, a multimillion-dollar expansion to the company’s Wilkesboro, N.C., printing facility and the construction of an 80,000-sq.-ft. (7,432-sq.-m.) converting and warehouse facility. The InterFlex facility in Merrill, Wis., expanded warehouse capacity and redesigned the workspace to accommodate new equipment and improve workflow. The company also increased capacity at the print facility in Dalkeith, (Scotland) UK, and increased warehouse capacity at its facility in Sunderland (England). The changes were a backdrop to InterFlex’s acquisition of Star Packaging, which was completed in 2014.

“We are one of few flexible packaging suppliers with the capacity to seamlessly service our customers out of multiple US and UK locations,” said Stephen Doyle, president and CEO of InterFlex. “Our equipment base is second to none and InterFlex possesses virtually all of the capabilities in-house to develop and manufacture increasingly complex packaging structures.”

As the Grand View Report states, the global demand for increased fuel efficiency and lower carbon emissions in vehicles is a significant driver in the move toward lighter materials — such as plastic composites — in automotive manufacturing. Companies are responding accordingly. Jiangyan MPT Co. Ltd., an automotive parts manufacturer based in Jiangyan, China, announced plans to establish a manufacturing facility in San Luis Potosi, Mexico. Jiangyan will invest $100 million to form a new wholly owned subsidiary, Minghua de Mexico, which will produce plastic components, plated auto parts like doors, windows and spoilers, and molds. The expansion moves Jiangyan closer to its customer BMW, which is investing $1 billion in an automobile manufacturing plant in San Luis Potosi.