The Other Side of the Story

Many companies, especially aerospace companies,
are discovering reasons to invest in Puerto Rico. 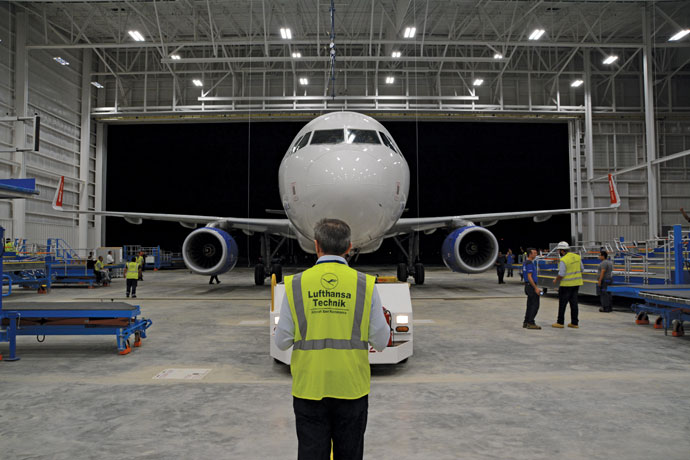 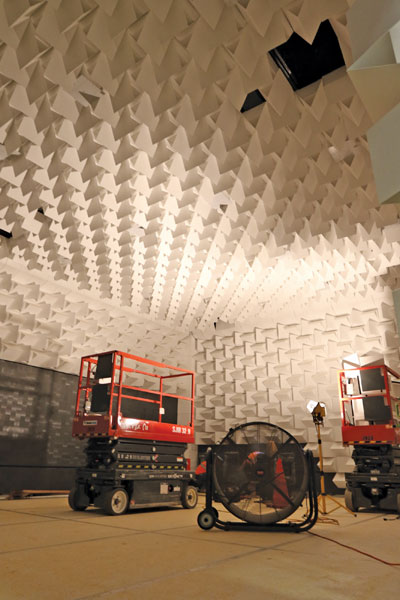 One of the electromagnetic interference labs at the new Honeywell testing and research facility in Aguadilla, Puerto Rico
Photo courtesy of PRIDCO

On July 21, an Airbus A320 from US-based carrier Spirit Airlines slowly pulled into a large aircraft hangar for a C-check at a brand new maintenance, repair and overhaul (MRO) facility at Rafael Hernández International Airport in Aguadilla, Puerto Rico. The Lufthansa Technik Puerto Rico (LTPR) facility was completed just the week before, only 11 months after the groundbreaking. When it reaches full capacity, the facility will have 400 employees.

Despite media reports, Puerto Rico is still an attractive investment location. In fact, companies from Lufthansa to Honeywell to Abbvie are investing heavily in Puerto Rico, both in infrastructure and human capital. “Most companies don’t get caught up in those issues,” says Robert Maroney, chairman of the board for the Pharmaceutical Industry Association of Puerto Rico, and site manager for Amgen, a pharmaceutical company with a long history and large presence on the island. “They’re looking at whether a location makes sense for their company, realizing those issues will be overcome. Companies want to know if it makes sense in the long run — you don’t make a decision to build infrastructure in a place for one to two years, it’s a 10- or 20-year investment.” 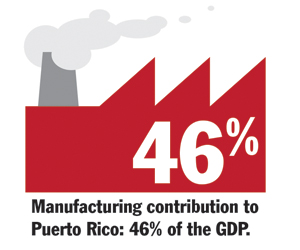 As in the rest of the US, the Puerto Rican manufacturing industry is stabilizing. “Puerto Rico has been in this game for a long time, over 70 years of concerted industrialization,” says Antonio Medina-Comas, executive director of the Puerto Rico Industrial Development Company (PRIDCO). “You go to Puerto Rico for the highest quality and consistent product and global regulatory requirements. It’s a place where you can manufacture for multiple markets and still manufacture under the US flag. We have the financial institutions and the regulatory framework that protects companies and their investments. We have a strong protection for your intellectual property under federal law and in the US court system. As a result, we’re still the right place for long-term investment.”

The pharmaceutical industry is an excellent case in point. Though initially attracted to Puerto Rico six decades ago by federal incentives that have since expired, the industry continues to thrive, grow and evolve. Maroney has a few thoughts about why. “It comes down to the capability that exists here,” he says. “We’re under the US flag in terms of jurisdiction, legality, and intellectual property protection. Puerto Rico is very willing and able to negotiate with individual companies from an incentives standpoint to entice people to come here and do business, not just on the manufacturing side of the business but on the R&D side as well.”

And then there’s the workforce. Through collaborations between industry and education, Puerto Rico has developed a deep, highly-regarded talent pool. “There is a lot of what we call process development, process improvement work that’s based on research and experimentation,” Maroney says. “Those folks typically come as chemical engineers, molecular biologists, chemists, and they’ve been coming out of the universities for 30 years or more. The numbers and the capabilities of those people are extraordinary at this point. Each year there are more students coming out of the university system that are extremely qualified and we’re hiring them on every year.” 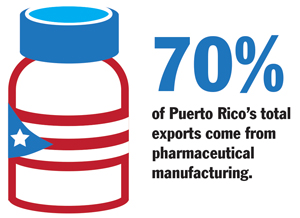 The strength of the workforce was the deciding factor in Lufthansa’s decision to locate in Puerto Rico. “We looked at the whole region, the Caribbean, Central America and even the US,” says Elmar Lutter, CEO of LTPR. “For us the priority was the workforce.” Lutter says Lufthansa liked what it saw, but wanted more. “In discussions with PRIDCO we made it clear that a world class MRO needs a world class school,” he says. “It’s as simple as that.”

Point taken. Puerto Rico immediately began building the Aerospace and Aviation Institute of Puerto Rico at the same airport. “The school is ready; we started accepting students in August,” says Medina-Comas. “It’s expected to be one of the top aerospace mechanic schools in the world. Programs are at the highest standards, globally, so we can feed mechanics to Lufthansa’s MRO and other companies.”

Though UTC Aerospace Systems has been in Puerto Rico since 1992, the company recently invested more than $15 million to increase manufacturing capabilities at its Puerto Rico facilities. At UTC’s Santa Isabel site, the company manufactures more than 3,900 parts and components for the aerospace industry, exporting more than 163,000 pieces annually. UTC recently created more than 200 highly-skilled jobs and thanks to increased customer demand, the company’s Puerto Rican affiliates are investing an additional $9 million in local Santa Isabel operations. 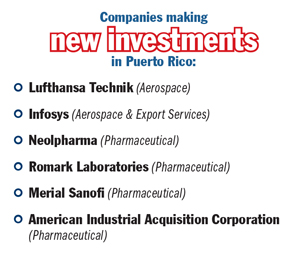 Honeywell Aerospace is investing $35 million in a new test lab near Aguadilla. The 75,000-sq.-ft. facility will house about 240 employees, mostly engineers. The lab will be engaged in R&D associated with electromagnetic interference (EMI) and will support the company’s global aerospace and defense operations in app and software development as well as aeronautics engineering design.

“Aerospace is getting to be the next big thing,” says Vicente Nazario, director and site leader for Honeywell Aerospace. “We really believe Puerto Rico has a great niche because of the talent and the key advantages, like a proactive academia, that align very well with aerospace.”

Nazario has worked for Honeywell in Puerto Rico since 2007 and says the days of aerospace companies growing in isolation are over. “It has been a very exciting ride to go from the beginning where everyone was trying to survive to getting to the point where synergies are developed and critical mass is created,” he says. “Today there are 1,200 to 1,300 engineers doing design work in Puerto Rico. We are expanding our services and design work. Other companies have started to come that provide a broader skill set to those engineering designs. Lufthansa just came in with an MRO portion. The Honeywell lab adds EMI to the equation. All of a sudden, within a few more years, you will see the base of aerospace in Puerto Rico. Companies will see capability, programs and talent, and the environment will be primed to grow.” 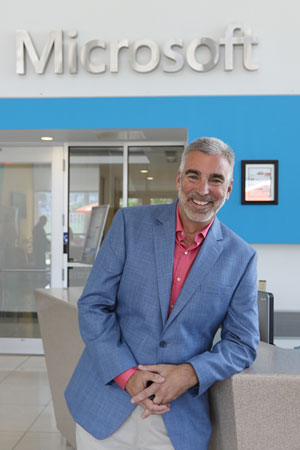 Where the End of the Road Means New Life

Twenty-four hours after its initial launch, more than 14 million users had downloaded Windows 10 operating systems (OS). It was the first time ever that Microsoft simultaneously launched an OS on optical media (CD/DVDs), USB and digital download, and all 14 million of them came out of Microsoft Operations Puerto Rico in Humacao. That’s pretty heady stuff for an operation that — in these days of data centers and clouds — still manufactures CDs and DVDs of Microsoft Office and other products.

“We built this plant to make optical media,” says Gene Purschwitz (pictured), the energetic general manager of Microsoft Operation Puerto Rico. “We actually melt plastic down, do the injection molding, make the disc, stamp the code on the disc, metalize the disc, put the artwork on the disc; the whole process is done on our floor.” The facility grew a server presence when digital distribution became popular. The site provides the core digital downloads for all of those same products for the entire Western Hemisphere. All Microsoft’s global product release services are done in Puerto Rico as well.

“We’ve got three different but connected operations all under one roof and to my knowledge, in Microsoft, we’re the only ones who have that,” Purschwitz says. “More and more we’ve positioned this plant to be the end-of-life work center for everything else. As everyone goes to the cloud, this has become a great consolidation for everything else.”

Tax incentives drew Microsoft’s original investment to Puerto Rico 25 years ago, but it’s the people that keep them there. “We started a very small operation, 25 people initially,” Purschwitz says. “At that time we were doing disc duplication only.” Once the incentives phased out, a decision had to be made. “Were we going to sunset operations in Puerto Rico or invest in what we saw as the next wave in distribution?” says Purschwitz. “That’s when we made the decision to actually start a company here and build a plant that was capable of manufacturing optical media.”

From a Microsoft standpoint, the Humacao facility isn’t large, just 165 full-time jobs. But it’s a vitally important operation as a global distribution center for the company’s global products, product release services and tech and data center services. “The big adjustment has been repositioning our workforce as the demand for optical media has come down,” says Purschwitz. “We’ve transitioned from three years ago when we had 61 percent of the workforce committed to physical manufacturing to 61 percent information workers today. Our center of gravity is more in product release and IT/data management than in physical manufacturing.”

Workforce ability and agility is a Humacao strength. In 2014, the Humacao site took over an anti-piracy capability from 30 vendors in Redmond, Wash., hiring 39 people to look for product keys being used illegally. Because they were Microsoft employees who had deeper penetration into the system they were able to do more work and generate even more revenue protection. “They had enormous targets they were supposed to get, double digits of billions to shut down,” Purschwitz says. “The proof in the pudding is that the first year they exceeded their target by almost $1 billion and will exceed the target this year by about the same number.”

This Investment Profile is prepared under the auspices of the Puerto Rico Industrial Development Company. For more information, contact Zenaida Solís at zenaida.solis@pridco.pr.gov or 787-758-4747.
On the Web, go to www.pridco.com.

NORTH AMERICAN REPORTS: FB's Bay Area Home to Expand Across Street, Double Shot of Growth From GlobalFoundries, and more (May 23, 2013)

IAMC INSIDER: Meet the IAMC active member from KLA-Tencor Corp., learn what some attendees took away from the recent IAMC Professional Forum in Colorado Springs, and read about new projects from member firms (Aug 5, 2010)