Eye on the Target 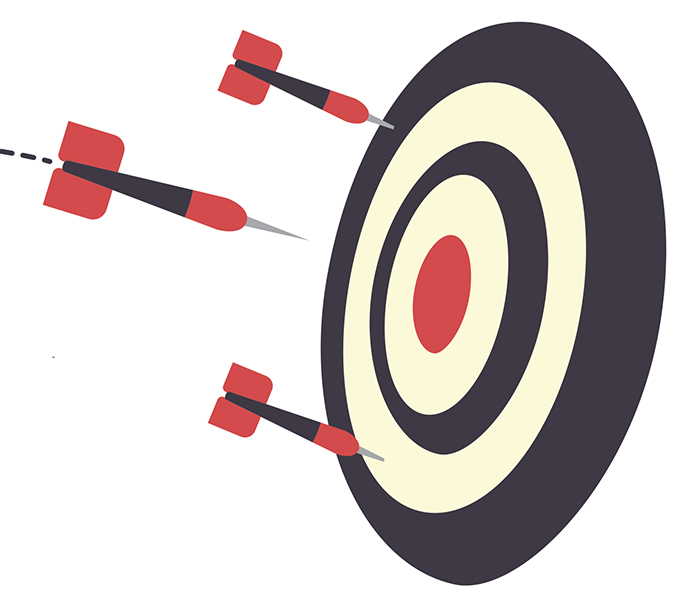 Each year, Site Selection surveys consultants to better understand the perceptions that guide their advice to clients. As in the past, this year’s respondents to the seven-question survey represent a broad spectrum of organizations and disciplines ranging from commercial real estate transaction support to incentives consulting. Responding consultants also differed widely in terms of industry specialization, geographic focus and other characteristics.

In your opinion, what are the top two or three elements of “state business climate”? 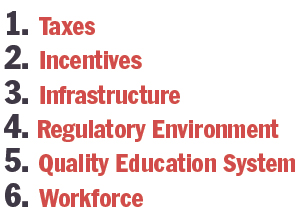 The first survey question asked: “For a typical site selection project, with what level of contact person do you usually work the most throughout the project?” Consistent with last year, approximately 38 percent responded that they begin at the regional level, 30 percent begin at the state level, 19 percent begin at the local level, and 13 percent begin at the county level. Additional written comments reveal a clear theme: With whom initial contact is made is a deliberate decision that is largely influenced by whether the consultant has personal relationships with economic developers in the region, and the trust and confidence that they have in those contacts. Despite the emphasis on data and information in the site selection process, relationships are crucial.

While the importance of business climate is certainly no surprise, opinions about what constitutes a good business climate, which the third survey question sought to discern, were more interesting. When asked to respond in their own words to the question “What are the top two or three elements of a state business climate?” consultants identified and ranked key location-dependent factors according to the rankings in the chart to the right.

For a typical site selection project, with what level contact person do you think site selectors usually work with the most throughout the project? 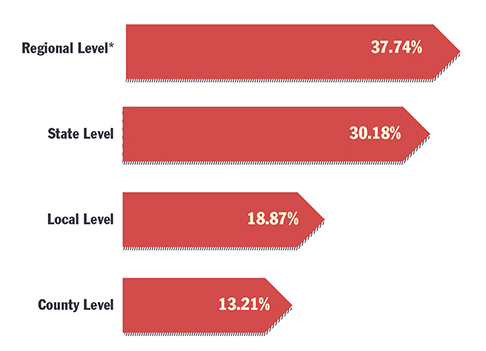 ∗Region being defined as multiple counties.
The following 10 states comprise the MAEDC region. Please check the three states with the BEST “business climate”. 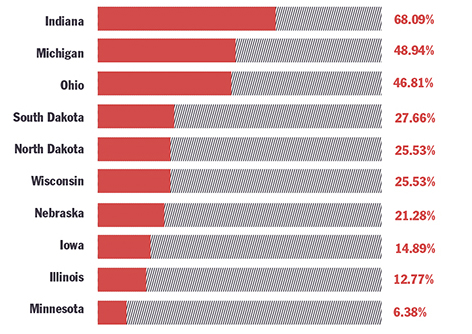 Incentives, which were ranked second by consultants, were ranked seventh (flexibility of incentives) and ninth (availability of incentives) by corporate real estate executives. Workforce, which was ranked first by corporate real estate professionals, was ranked sixth by consultants. Certainly, business climate is in the eye of the beholder, and opinions are affected by a variety of factors including industry and facility type.

The fourth question, new to the survey this year, asked respondents to identify “the three Midwest states with the best business climate.” The results are listed above. Michigan and Ohio were neck-and-neck in second and third place, respectively. Question five followed up by asking which Midwest state has the best business climate, to which approximately 43 percent responded Indiana.

The second-to-last question expanded the geography to the nation and asked “Without regard to region, which US states have the best overall business climate?” Consistent with last year’s survey, approximately 60 percent ranked Texas among the three states with the best business climate. South Carolina and Georgia followed Texas, with roughly 30 percent counting them in the top three states. And Indiana shows up again, the sole Midwest state among the top responses.

The overall ranking was as follows:

Without regard to region, list the three US states you think have the best overall business climate.* 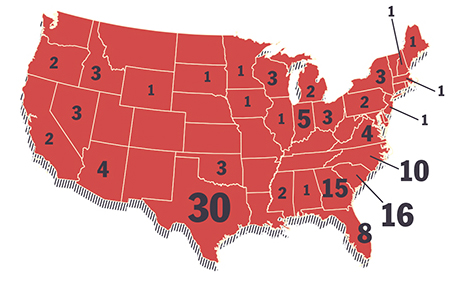 ∗Based on number of votes and not percentages. States without numbers received no votes.

The seventh and final question asked consultants to “List three countries — excluding the US — that you think offer the best opportunities for profitable business investments in 2015 and beyond.” The consultants’ responses included over 30 countries covering nearly every region of the globe. The most commonly cited countries are spotlighted in the graphic to the left.

For comparison, last year’s ranking was as follows:

Whereas prior questions reflected much consistency of opinions from year to year, this final question uncovered the greatest shifting of opinion, with Vietnam coming seemingly out of nowhere, Germany showing well, and slight drops from China, India and the UK.

List the countries, excluding the US, you think offer the best opportunities for profitable business investments in 2015 and beyond. 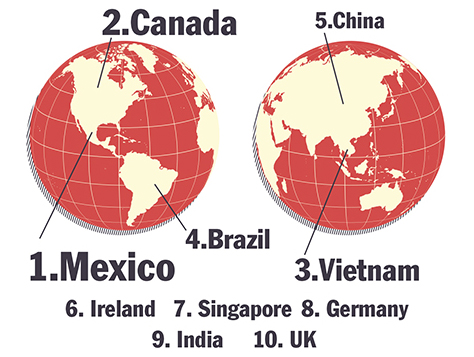 It is important to keep in mind that the results of the consultants survey represent just one perspective within the broader site selection field. Only a relatively small portion of site decisions are made with the aid of consultants, so for a broader cross section of opinions, also consider Site Selection’s annual Business Climate Ranking (published each November), which blends results from the annual survey of the consulting community with those from the annual survey of corporate real estate executives.

Global economic conditions, terrorism, a looming US interest rate hike, the start of the US presidential election season, and other key factors have made 2015 an interesting year in domestic and global site selection. 2016 should be no different, and I already can’t wait to see what next year’s survey holds.

Dennis McAndrew is a principal at Silverlode Consulting, the site selection and economic development consulting firm that is the official US site consulting partner of Site Selection parent firm Conway, Inc. 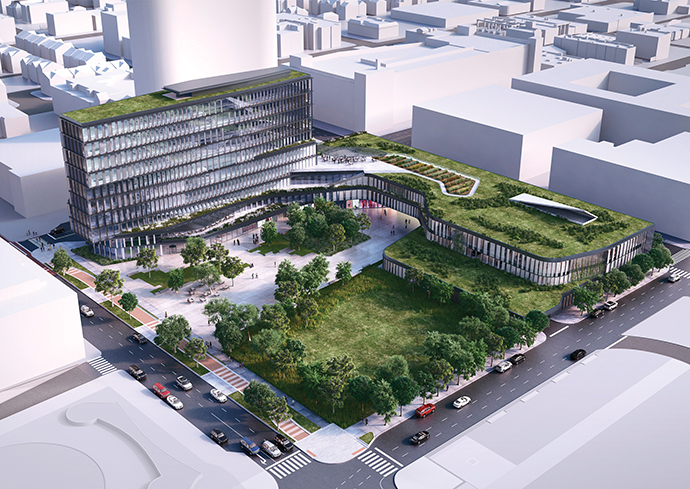 When asked to rank state business climates in the Midwest region, site consultants pointed to Indiana as No. 1 in that category. And the state was the only Midwest state to appear in their Top 10 business climate states nationally.

Among the projects landing in the state is a new $30-million headquarters in Indianapolis (see rendering) for the global distribution business of Cummins, the multinational based in Columbus, Ind. 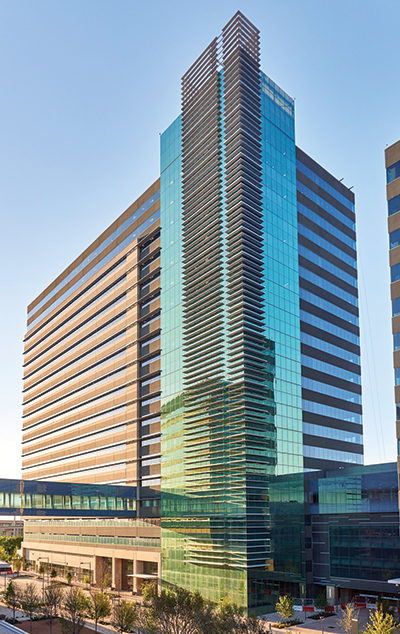 Consistent with the views of corporate end users expressed in Site Selection's annual business climate rankings in November 2015, when consultants were asked which US states have the best overall business climate, approximately 60 percent ranked Texas among the three states with the best. South Carolina and Georgia followed Texas, with roughly 30 percent counting them in the top three states.

Data centers, office and headquarters are among the state’s surging niches of corporate investment, including a major hub from State Farm in Richardson (photo) and a North American headquarters complex from Toyota Motor Corp. in Plano. 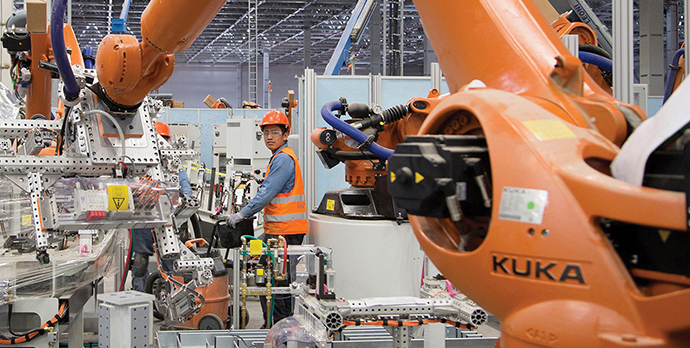 Photo courtesy of Audi of America

For two years in a row, Mexico has led consultants’ list of non-US locations they think offer the best opportunities for profitable business investments now and in the coming years.

Government reforms and dramatic infrastructure improvements are among the positive factors behind such sentiment. And billions of dollars in automotive industry investment are the proof on the ground. Here a robot is seen being installed in 2015 at Audi’s plant in San Jose Chiapa, where the company chose to locate a new plant in 2012, and where it broke ground in 2014 on a supplier park. The park's initial seven suppliers were expected to create roughly 1,000 of a potential 20,000 new jobs in the region created by supply localization.