Reuse is the sincerest form of flattery to areas ready for resurgent industry. 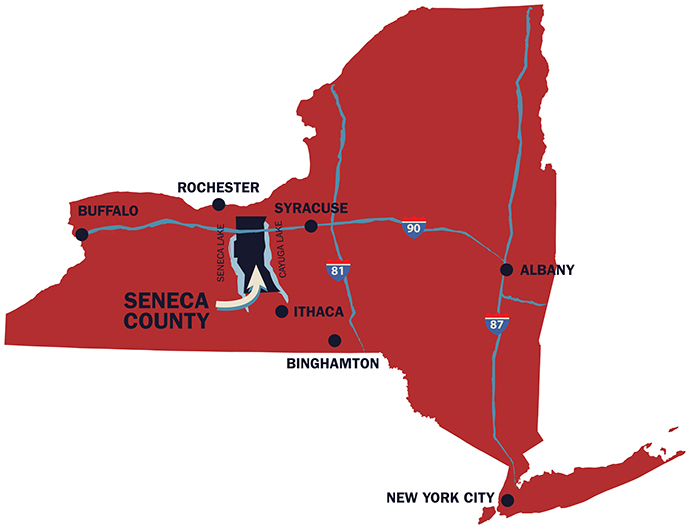 Together, they represent more than 11,000 acres (4,452 hectares) on Chesapeake Bay in Baltimore, along the Ohio River in Southern Indiana, and in New York’s Finger Lakes. They were originally founded for steelmaking and warfighting purposes. And they’re among dozens of megasites ready and waiting for new industry — domestic or foreign — to call them home.

In the case of these three sites, however, super-massive-ultra-megasite might be the right terminology. In early December, the Seneca County Industrial Development Agency (IDA) approved the formal invitation for bids from prospective buyers of the approximately 7,000-acre (2,833-hectare) former Seneca Army Depot, a former World War II ordnance depot located between Seneca Lake and Cayuga Lake in Upstate New York.

Believed to be one of the largest developable sites in the Northeastern United States, the property includes a full complement of buildings (including 459 armament storage igloos), roads and a section of railroad track. Among the site’s possible uses are agribusiness, logistics and data storage. Symbolic of the leap forward the area hopes to make, bids are being accepted until Leap Day, February 29, 2016.

River Ridge Commerce Center in southern Indiana was born from the remains of the former Indiana Army Ammunition Plant.

“We received mega-site certification this past year from McCallum Sweeney,” says Tom Vittitow, planning and development manager for the River Ridge Development Authority, of a 1,500-acre (607-hectare) parcel carved out of the overall development. “I think this particular site would qualify as one of our nation’s super sites —we are a 6,000-acre [2,428-hectare] commercial, industrial park with lots of room.”

In Maryland, Sparrows Point was a major steelmaking hub from its early days during the Industrial Revolution. Today, it’s a 3,100-acre (1,255-hectare) logistics and maritime development in southeastern Baltimore County. It features a unique combination of deepwater berths, rail infrastructure and highway proximity that its champions like to call “the largest and most strategically important multi-modal industrial tract on the Eastern Seaboard.”

The exposure comes as a new 30-year contract has been signed between the Maryland Department of Transportation’s Maryland Port Administration and the Helen Delich Bentley Port of Baltimore’s top roll on/roll off customer, global shipping and logistics giant Wallenius Wilhelmsen Logistics (WWL).

The new partnership supports nearly 1,000 direct jobs at the Port of Baltimore.

No Shortage of Frontage

Other parcels continue to hop onto the Super Sites roster.

Georgia Central Railway (GC) in December announced that its Heart of Georgia (HOG) Mega Site, a 2,000-acre (809-hectare) industrial park in Dublin, Ga., had received dual Mega Site/Super Park certification from McCallum Sweeney. The site is the first in the US to obtain this dual certification — and it has dual rail, with connectivity to Norfolk Southern in Macon and CSX in Savannah.

In northern Louisiana, a newly named 1,552-acre (628-hectare) megasite is really two sites put together, and now called the England Airpark Megasite, at Alexandria International Airport. It’s dual certified by Louisiana Economic Development and McCallum Sweeney. Like its brethren in New York, Indiana and elsewhere, the parcel has a military history. 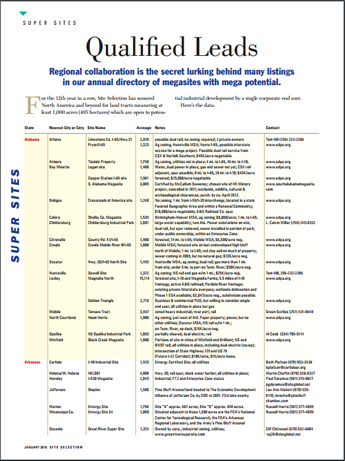 For the 12th year in a row, Site Selection has scoured North America and beyond for land tracts measuring at least 1,000 acres (405 hectares) that are open to potential industrial development by a single end user. Go to SiteSelection.com in mid-January 2016 for a fully updated, comprehensive chart of super sites, with all the data and contact information site seekers crave.