Google’s Christmas present to Tennessee came on December 22nd, when it announced a $600-million data center at the former Hemlock Semiconductor site in Clarksville. The search engine giant’s eighth US data center will create about 70 jobs.

Why the Clarksville location?

“This site comes with the benefits of existing infrastructure, which we plan to reuse and recycle — for example, many of the office buildings will be used for Googlers when the data center is operational,” said Google Vice President for Data Center Operations Joe Kava. “At the same time, we have room to innovate and grow both as a data center and as a member of the Montgomery County community. We’re excited about the opportunity to experiment with new kinds of technology and design an impressive facility — we can’t wait!”

The roughly 1,300-acre (526-hectare) site will be powered 100 percent by renewable energy thanks to an arrangement with the Tennessee Valley Authority (TVA). Through the agreement, Google will be able to scout new renewable energy projects and work with TVA to bring the power onto the electrical grid.

Two weeks previously, on Dec. 7th, Under Armour opened its new, 1-million-sq.-ft. (92,900-sq.-m.) distribution and warehouse facility in Mount Juliet, near Nashville. With the establishment of the Nashville Distribution House, Under Armour will invest over $100 million and will create 1,500 new jobs in the area over the next five years. It’s the performance apparel manufacturer’s third US distribution facility.

Can communities outside the metro areas of Memphis, Nashville, Chattanooga and Knoxville compete for capital investment effectively? Perhaps some can, but Gov. Bill Haslam and his economic development team are working to make sure they all can. In August, the governor and Economic and Community Development Commissioner Randy Boyd announced the creation of a Rural Development Task Force that will bring resources together from a wide range of organizations to advance rural communities and economic development throughout Tennessee.

“Tennessee’s rural communities are the heart of our state in so many ways, whether it’s our main streets, longstanding companies or as world-class tourist attractions, and we want to continue helping them thrive and grow,” Haslam said. “We’re pleased to announce this Rural Development Task Force, which will build on the work we’ve already been doing to create a measured, thoughtful approach to supporting economic development in our rural communities.”

Added Commissioner Boyd: “Tennessee is experiencing tremendous economic momentum, but unfortunately our success is not shared in many of our rural communities. Many are still suffering, and our state can only be great if all communities share in the success. At the Department of Economic and Community Development, we are doubling down on rural development efforts. However, to make a transformative difference, we need a holistic solution. It’s not just about recruiting a new business. It is about increasing educational attainment, supporting rural entrepreneurship, creating and promoting tourism, and of course, agri-business.

“Also, rural broadband is critical,” Boyd added. “Our new Rural Development Task Force brings together all key departments in state government along with our legislative leaders and many other public and private partners. The challenge is great, but so are the combined resources of this team. Together, we can make a major impact.” 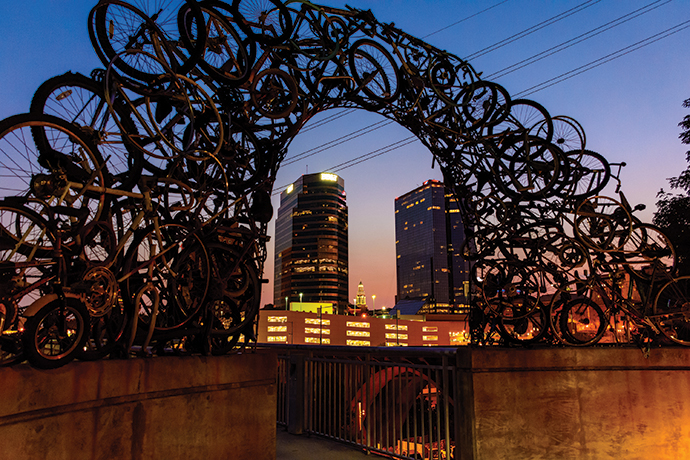 The Bike Arch with Knoxville in the background.
Photo by Heather Overman

The Task Force will develop and adopt an initial three- to four-year strategic plan that will include a comprehensive vision for rural development. In order to do this, the taskforce will convene issues forums, identify and engage stakeholder groups and look to the successful ThreeStar program as a way to identify gaps, challenges and opportunities.

In October, the governor and commissioner announced the state is investing $8 million in a new Rural Economic Development Fund “to build capacity for transformative economic development strategies in rural Tennessee.” The Fund will provide an initial $6 million for Site Development Grants for communities to help move economic development sites to shovel-ready status as part of the state’s nationally recognized Select Tennessee Site Certification program.

The new initiative will also fund $1 million in grants for the enhancement of tourism sites in rural communities, as well as $600,000 for additional ThreeStar community grants including a Main Street Business Incubator program for downtown business districts.

“Tennessee has embraced real change in our approach to workforce readiness with programs like the Tennessee Promise, and these new initiatives led by TNECD will help build capacity in rural areas and get them ready for investment and economic success,” Haslam said.

The Rural Economic Development Fund will also provide $250,000 in funding for a statewide survey of broadband capacity in rural Tennessee — a direct result of feedback from rural community leaders.

In addition to Google’s data center announcement in December, Tennessee won some significant projects in 2015 in several key sectors. These include:

WHERE TO LOOK
FOR EMPLOYMENT GROWTH IN 2016

Tennessee’s professional and business services sector will see the strongest employment growth in 2016 — of about 4 percent — according to the fall 2015 Tennessee Business and Economic Outlook report prepared by the Center for Business and Economic Research at the University of Tennessee’s Haslam College of Business. The education and health services and government sectors will also see employment gains, but by more modest rates. The only sectors forecast to see job losses in 2016 are information and other services.