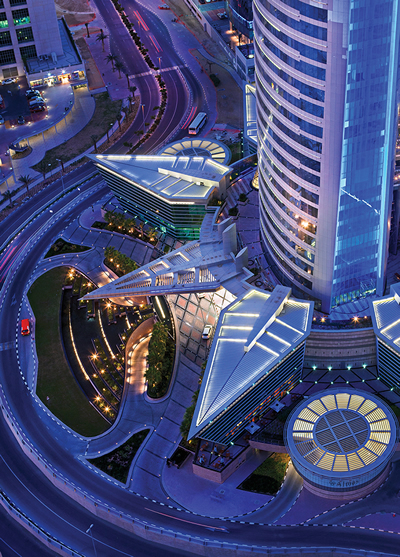 In the early days of the DMCC free zone, several towers, including the signature Almas Tower (pictured), were developed to support the precious metals and precious stones sector. Today the zone's clusters also include agriculture and energy, among others.
Photo courtesy of DMCC

Dubai in general, and DMCC in particular, seem to be the right places at the right time.

Equidistant from London and Seoul, Dubai's accessibility to so much of the business world has earned the emirate its own star on the map among the corporate elite. Now it's gaining the attention and investment of the global startup community too.

Just ask Iraqi-American Muhammed Mekki, who is co-founder, with fellow McKinsey & Co. consultant Louis Lebbos, of AstroLabs, the only Google for Entrepreneurs Tech Hub in the Middle East and North Africa (MENA) region. The hub launched in October 2015 in the DMCC Free Zone, which since its establishment in 2002 as a strategic initiative of the Government of Dubai to create a commodities marketplace has blossomed to encompass 11,500 registered companies. Asked what the DMCC team has learned over 13 years, Krysta Fox, director of Free Zone, DMCC, says, "The most important lesson we have learned is to listen to our community and ensure that everything we do is with our community in mind ... There are a few things you need to get right to make it work — the right development and infrastructure, the right regulatory framework, and the right ways of connecting the community to you and each other."

Mekki knows how to connect: After graduating from Stanford University, he and Lebbos co-founded e-commerce firm Namshi in Dubai, scaling from two people to 200 and raising more than $20 million in venture capital. For their next act, they wanted to help grow the entrepreneurial ecosystem of the region, starting with an education platform. Their work teaching people at about 150 tech firms in the region how to scale up technology coincided with DMCC's strategy to attract more tech companies, and with the global growth of the co-working concept. Google in particular is partnering with organizations in key cities to launch a network of tech hubs that now is nearing two dozen, with the December opening of another hub in Amsterdam.

"We discussed with them the potential of opening one here in Dubai," Mekki says. "It's the place where the most serious entrepreneurs are based and the venture capital is concentrated. And the Gulf market here is the most robust."

As that pitch proceeded, AstroLabs was deepening its relationship with DMCC in order to pitch its tent in the zone.

"What we've done with the DMCC is create a bespoke product for tech entrepreneurs to set up an entity with no up-front cost, and a subsidized license," he says. A monthly membership fee gives those chosen entrepreneurs the ability to open a bank account and establish residency. "Within a few weeks the entity is set up, and a few weeks after that, they have residency, without the typical delays found in the US or European markets," says Mekki.

The Talent Will Come

The AstroLabs location offers 6,500 sq. ft. (604 sq. m.) of 24/7 workspace with a coding cave; a cafe; a device lab co-designed with Google for mobile app development; and a training room featuring AstroLabs Academy programming, all just five minutes from the Dubai Marina (Damac Properties) metro stop. The membership fee puts costs on par with a major city, but "cheaper than in a major tech hub like San Francisco," says Mekki. 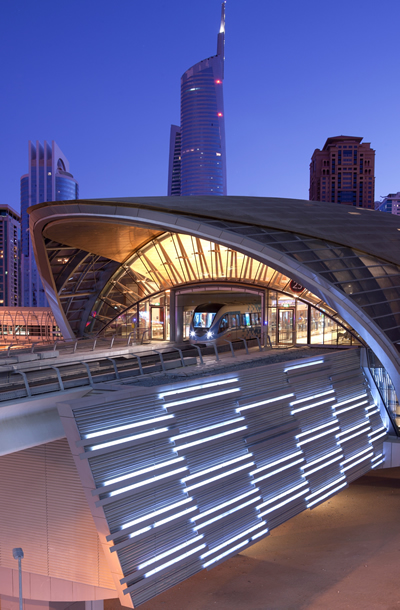 Being five minutes from a metro stop is one of several amenities that made DMCC the perfect spot for AstroLabs — the only Google for Entrepreneurs Tech Hub in the MENA region.
Photo courtesy of DMCC

"The cost of real estate is just one driver of business decisions," says Fox. "The DMCC has 66 towers, covering all levels of property offer. This has created an environment of choice, and the forces of supply and demand are able to operate freely. The fact that companies can own or lease has really helped with long-term thinking. Time and again I see that companies consider many factors when they evaluate their site selection: proximity to markets, access to infrastructure, ease of doing business; and also very important is whether it’s a great place for families to live — is there a good education system, is it safe, is there plenty of family entertainment?"

In the case of DMCC free zone, the zero-percent corporate and personal tax is attractive, as are the flexibility of foreign ownership and the flexibility in relation to capital repatriation. "The fact that we are also in a fantastic location — surrounded by residential communities, within access of beaches, the desert and family entertainment areas — really adds to the attraction," says Fox. And amid global concerns about safety and security, "Dubai has been well recognized as a safe and tolerant city for many years now," she adds. "There are plenty of studies to back that up. Expats have been settling here in great numbers since the 1970s and earlier. I have been here with my family for over 10 years, and it’s a real privilege to raise our children in such a multicultural environment."

The free-zone licensing process is SalesForce-integrated, so setting up is easy, and a model for the Smart City model Dubai is pursuing more generally. "They're leveraging technology in a way you won't see governments use around the world. We love that," Mekki says.

The unique offering of Dubai amounts to much more than being tax-free. "It's a crossroads," he says, "with over 2 billion people within a four-hour flight, connected by some of the world's best airlines, infrastructure and quality of life."

DMCC's Krysta Fox says that transport and logistics infrastructure is critically important, and the growing network of Emirates Airlines adds to the convenience. Asked where in the world she'd like to see more flights to and from Dubai, she admits some difficulty in answering "because there are opportunities all over the world. Some close to home, Iran for example. Some several hours' flight away across Africa. Emirates has more than 140 destinations on six continents. It has been great to see additional USA cities added recently, including Orlando. We are already planning a trip there ourselves. We have companies from over 150 countries, so the whole world is basically our marketplace." 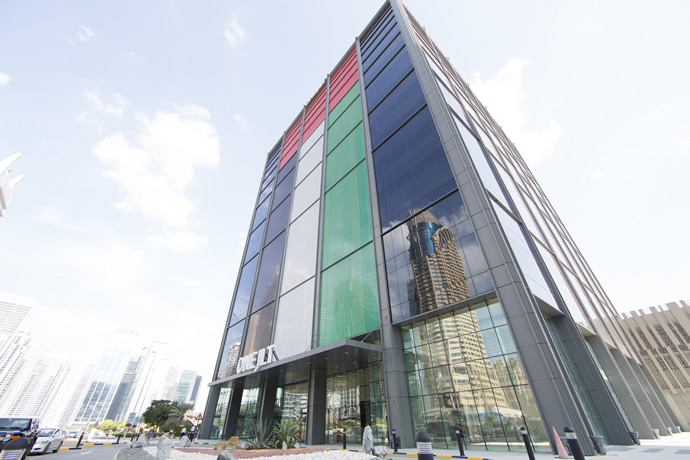 DMCC's new One JLT building, already 30 percent leased, was constructed in partnership with Brookfield Multiplex based on feedback from large corporate entities. "Although it’s too early to reveal office tenant names, we have announced that Modul University, Austria’s leading private university, has chosen One JLT as its first ever home outside of Austria," says DMCC's Krysta Fox.
Photo courtesy of DMCC

Mekki comes from that same point of view when discussing the potential of AstroLabs and of its members.

"You also have the ability to locate any talent you want in Dubai. Say you have tech talent in Eastern Europe and Russia, with part in Asia or the US — you can bring everybody here and get residency and base a global team out of Dubai. My partner and I moved here from the US. We started with McKinsey, then built our own tech startup here. We felt there was an opportunity at this point in time, a window to be the platform that attracts some of the best companies."

Driven by demand, and coincident with the UAE's hosting of the World Expo 2020, more space is on the way: Burj 2020, destined to be among the world's tallest commercial towers, will be the centerpiece of DMCC's forthcoming 10-hectare (25-acre) Burj 2020 District. When complete, the mixed-use district will add 1.3 million sq. m. (14 million sq. ft.) of capacity to DMCC, the fastest-growing free zone in the UAE.

"Several years ago the leadership team at DMCC recognized that we would need to expand the district to accommodate the phenomenal growth of the free zone," Fox says of the Burj 2020 planning process. "We have taken inspiration from many of the world’s best developments and concepts. Our CEO Mr. Gautam Sashittal and I were recently privileged to tour a number of developments in New York, taking in Hudson Yards, Hearst Tower, the Tishman & Speyer offices and Goldman Sachs — all inspirational in different ways."

Because of regional instability and the robust Gulf consumer markets within easy reach, says Mekki, Dubai has become "the de facto place for entrepreneurs to set up a company" to serve the MENA region. "Our play is to help Dubai play that role on a global level, which we think is something that's going to happen. Already, Deliveroo, a UK based online company, has raised about $300 million in investment capital. We want to promote more of that — tech startups scaling globally."

One of the chief attractants is the low level of competition in the market thus far, he says, singling out the e-commerce benchmark of online sales as a percentage of overall retail sales: "It's about 2 percent in the region, compared to 30 percent in the UK and 20 percent in the US," he says. But at the same time, nearby Saudi Arabia has one of the highest global rates of YouTube views per capita and highest engagement levels on Twitter, and the region as a whole is among the strongest per capita when it comes to gaming. Therein lies the opportunity.

At $92.57 per sq. ft. as of Q1 2015, prime office space is the 19th most expensive Win the world, according to CBRE, but still cheaper than space in the CBDs of Boston, Tokyo, Paris, Singapore, Shanghai and Mumbai.

Mekki says surveys show a lot of actively searching talent is interested in the region. He knows firsthand, as people from 30 countries are among the founding members of AstroLabs. And he looks to Chicago's booming Google for Entrepreneurs hub 1871 as a model Dubai might emulate.

"Before 1871 was on the scene, Chicago didn't have much of a presence on a national level, much less international," he observes. "Now they're expanding aggressively, are up to 200,000 square feet and growing like crazy. It shows how much impact a single organization can have on an entire ecosystem."

Two startups from 1871 were among the 12 who came to DMCC in December for a global travel technology program.

"They commented that what we're developing in Dubai is quite magical, and very much in the spirit of what one would find in a technology hub in the US or Europe," says Mekki. "Many of our founders come from those markets, and are pleasantly surprised to see the quality of the people, events and mentors. We're benchmarking ourselves against the best spaces around the world, and really trying to create a world-class facility."