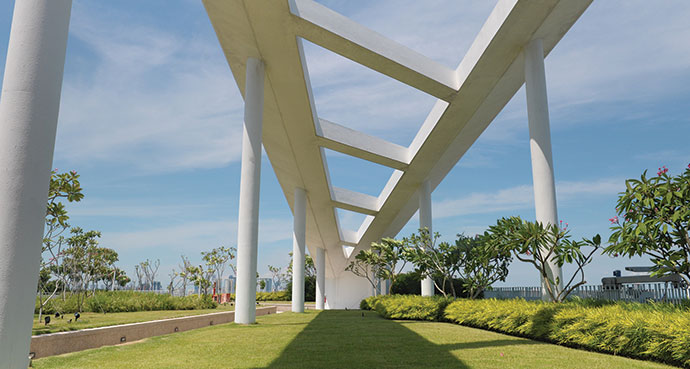 What if the term “ecosystem” were an accurate description of your company or region, rather than a wrung-out business metaphor? 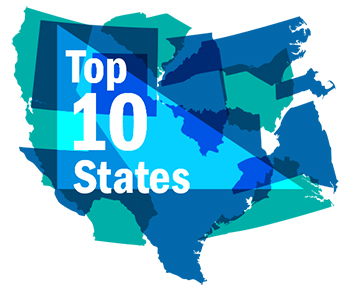 Reprising and upgrading rankings we published every summer from 2010 through 2013, this data-rich, one-of-a-kind index balances a number of factors comprising cleantech and green industry activity, energy awareness, the built environment, redevelopment of polluted sites, policy, and human well-being and quality of life.

In other words, like Site Selection’s other rankings, the 2016 Sustainability Rankings reflect where the action is, and where the dirty work of cleaner living is taking place, whether by dint of a new factory making solar panels, a new city incentive for energy-efficient buildings, increased renewable energy deployment or intensified brownfield cleanup activity.

The 2016 Sustainability Rankings include a unique indicator from CSRHub, whose co-founder and CEO Bahar Gidwani cross-matched three years of global facility investment data from Site Selection’s Conway Projects Database with his firm’s rich data measuring corporate social responsibility (CSR) perceived performance among more than 16,000 companies around the world. That treasure trove of data also tracks where high-CSR companies are headquartered.

The result: A valuable window onto where socially responsible companies are already headquartered or currently investing. At the country level, Finland, Australia, New Zealand, the Netherlands, the UK and Denmark are among the expected top performers, while the presence of such countries as Colombia, Nigeria, and Pakistan may surprise some. At the US state level, states with what might be called a high CSR factor included California and Oregon, but also such states as Michigan, Kansas and Georgia.

“We hope that the information will start a conversation on this subject that is useful for those who are tasked with selecting which companies to encourage to site in a state,” says Gidwani. “We believe the information may also be interesting to companies who seek to locate new facilities in an environment that fits their culture and social goals.”

Germany’s energiewende, or energy transition, is well documented. And its performance in these rankings is corroborated by other measures. A report issued in May 2016 by the International Renewable Energy Agency (IRENA) found Germany to be among the world’s leaders in renewable energy employment as well as deployment. It’s also the place where, according to the newly issued World Atlas of Night-Sky Brightness from the International Dark-Sky Association, residents are most likely among the G20 nations to be able to view the Milky Way from their homes. 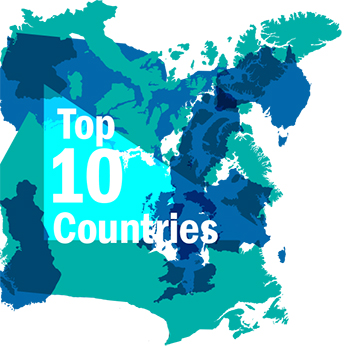 Dr. Daniel Klingenfeld is an expert on energy and climate policy issues who heads the Director’s Staff at the Potsdam Institute for Climate Impact Research (PIK). He’s building a house himself soon, and looking at how to incorporate renewables and high-grade insulation into the project. In a recent talk on climate change at the German-American Chamber of Commerce in Atlanta, he noted the country’s steady commitment to renewables even after subsidies subsided.

“The conventional wisdom from experts was that a power system as we know it can’t handle more than 20 percent renewable power,” he said. “In Germany last year we averaged 33 percent, and our country is in good shape … so be careful about conventional wisdom.”

Asked to highlight models when it comes to taking action regarding sustainability, he immediately pointed to No. 4 Denmark’s glittering capital of Copenhagen, calling the city the “poster child” for sustainability due to its commitment to become carbon-neutral by 2025 and an urban mobility system that features bicycle superhighways.

Copenhagen is one of the Top 10 Smart Cities in the world, according to a ranking by Cisco, which is making major investments in the country. And it’s frequently ranked among the most livable cities in the world.

Asked for his definition of sustainability, Claus Lønborg, CEO of investment promotion agency Copenhagen Capacity, says the term a few years ago might have meant simply a green environmentalist agenda, but today has a broader meaning that can encompass economy, well-being and healthcare. A sustainable city, he says, is one that “will be able to take care of its population and develop prosperously over time. Terms like ‘smart cities’ are coming from that. It’s not enough to be green. You also have to be smart.”

A prime example is the city’s just-launched big data effort, City Data Exchange, which could be used, he suggests, to help solve the traffic and parking congestion issue identified in the center city not long ago. Street Lab is Copenhagen’s test area for smart city solutions in real urban space. As for its net-zero goals, Denmark is about 50-percent supplied by wind now, and much of the heat formerly generated by coal-burning power is supplied now by district heating. Among the less-appetizing green attributes are a tax on energy use that Lønborg says is “not very well liked by some companies, but nevertheless it does incentivize you to become greener.” And then there’s that 160-percent import tax on all cars, which may evolve toward a model where taxation is more directly linked to a car’s emissions and sustainability profile.

Asked how openness to immigrants and refugees fits into a sustainability agenda, Lønborg admits that is “something we are really struggling with in all of Europe” as refugees from Syria and other locations flood into the region, but “if you want to have a sustainable country or city or economy, you need to do these things.” Denmark is doing more than its part for its size, but has had to manage the numbers in order to allow what Lønborg calls “sustainable integration.” Most immediately, he says it’s crucial to identify as quickly as possible the talent and qualifications in the refugee community. The next step, he says, is getting them to the work.

Data also will be useful in keeping Denmark’s famously free healthcare system affordable as costs to take care of an aging population mount. “That is the next big thing. The sustainable city of the future takes into the equation the overall well-being of citizens. This is where I see innovation coming now, in merging healthcare companies with IT tools and expertise.”

Is it counter-intuitive to see Texas as our No. 1 state for sustainability, just above California and North Carolina, when we know it’s already a top state for corporate facility investment as well as a top oil and gas territory?

Those things might seem contrary, but they also can be congruent. For instance, at Toyota’s new North American headquarters campus rising in Plano, a 7.75-megawatt system will be the largest corporate office on-site solar installation among non-utility companies in the state of Texas. Expected to provide approximately 25 percent of the power needed for the campus, it’s one part of Toyota’s goal of USGBC Platinum LEED certification. 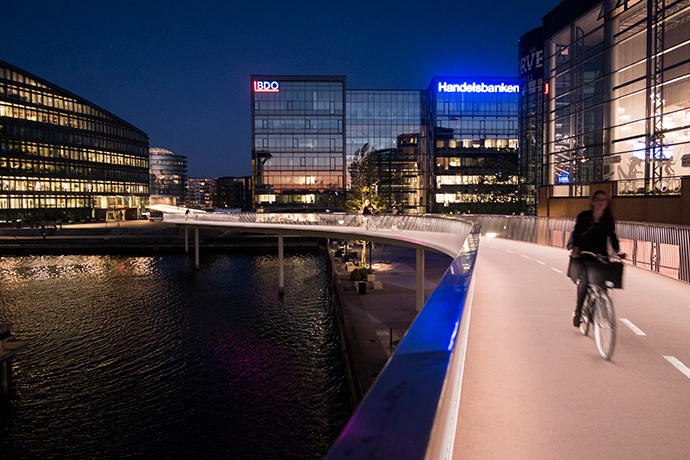 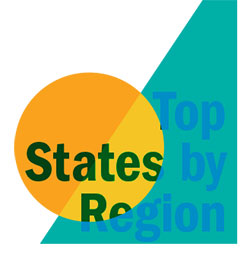 When it comes to total cumulative LEED certifications of all kinds nationally, Texas is No. 2 behind California, and still finishes in the top 10 in LEED certifications per capita (California is 18th) even as the Texas population booms in multiple cities. Meanwhile, the state continues to lead the nation in wind energy deployment and development. And Toyota’s campus is emblematic of the transit-oriented development now sprouting in those multiple booming cities.

Over $615 million of private investment has been committed to the restoration of vacant, blighted or contaminated land during the past five years in Grand Rapids, Michigan. Since the enactment of the Grand Rapids Sustainability Plan, the city reduced its unemployment rate from 15.2 percent in FY2010 to 5.4 percent in FY2015.

Wait: walkability and Texas? That’s right, say experts like Chris Leinberger, president of LOCUS: Responsible Real Estate Developers and Investors and a professor in real estate and urban analysis at George Washington University School of Business. At a press conference celebrating the release of Foot Traffic Ahead 2016, ranking the country’s top 30 metropolitan areas on a scale of most to least amount of walkable urban development, he said highly walkable urban places are what the knowledge economy is demanding, and that there’s a high correlation between walkability and high GDP per capita.

Dallas-Fort Worth and Houston, he said, have up to now been the exceptions that prove the rule. But the study’s analysis of forward momentum indicators paints a different picture. 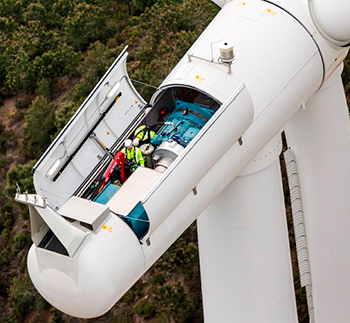 Siemens' leadership in sustainability ranges from building and servicing leading renewable power and smart transit technology to running a tight ship in-house: The company in 2015 achieved the highest possible score in the Carbon Disclosure Project (CDP), the world’s largest climate-protection survey, and also ranked No. 2 in in the Industrial Conglomerates category of the 2015 Dow Jones Sustainability Index.
Photo courtesy of Siemens

“A lot of people hold out Dallas and Houston as examples of how the country should go,” he said. “They’re great models — ‘Even Dallas and Houston are moving aggressively toward a walkable urban future.’ And since they’re Texans, they’re doing it in a big way — the DART system expansion is the second or third largest in terms of new [rail transit] construction in the country.”

The Science of Life

DFW finished a close second nationally to Greater Boston among our top sustainable metro areas, and Massachusetts as a whole finished 8th among states. The area scores high in walkability too (third nationally) while coming in 7th in the American Fitness Index (AFI) released in May by the American College of Sports Medicine (ACSM) and the Anthem Foundation.

The calculation of our index at the beginning of summer coincided with strong corroboration, as environmental solutions, waste and water company Veolia announced it was moving its North American zone headquarters from Chicago (No. 5 among our most sustainable metros) to downtown Boston. 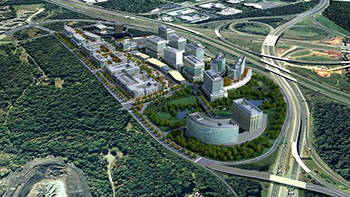 DC's sustainability/walkability quotient keeps rising. Situated on an 85-acre site on Metrorail’s Silver Line next door to Washington Dulles International Airport. The Hub, formerly known as Dulles World Center, is slated for a $1-billion, LEED-certified buildout by a JV between Origami Capital Partners and an affiliate of Greenfield Partners to become a 24-hour mixed-use gateway.
Image courtesy of LHB Communications

“We believe that Massachusetts and the Greater Boston area, with its commitment to sustainability and growing a knowledge-based, innovation-driven economy, is a perfect fit with Veolia’s mission of ‘resourcing the world,’ ” said Veolia North America CEO William J. “Bill” DiCroce. In an interview with the US Chamber of Commerce Foundation in May, DiCroce said the circular economy — where value from used byproducts is found, just like in natural ecosystems — is a “powerful business solution,” citing the example of his company’s reclamation of two chemicals from the waste stream of a pharmaceutical client, which are then sold as virgin solvent to the paint industry.

It’s a natural ecosystem, and it’s the dirty work of cleantech in action — a microcosm of the leaders the 2016 Sustainability Rankings salute.