From Farm to Table, Safety Rules in the New Food Supply Chain 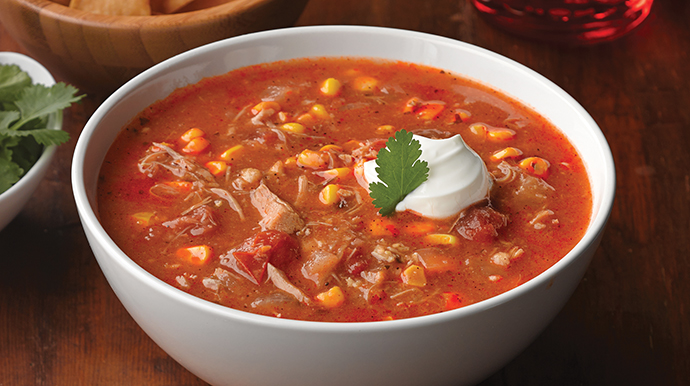 What keeps food and beverage (F&B) manufacturers up at night? It’s not how to formulate the next taste sensation or which color Gatorade will appeal to Generation Z consumers. Think food-borne bacteria recalls or jail time, a la Stewart Parnell, former CEO of the now-defunct Peanut Corporation of America. Food safety in all its iterations is the most important issue facing food and beverage manufacturers. “With longer supply chains and more complex food sourcing, that job is becoming more complicated,” according to the Food Manufacturing Update recently released by Cushman & Wakefield (C&W).

Food processors face a host of safety issues including regulations like the Food Safety Modernization Act (FSMA) and rules surrounding “free-from” diets, which address the handling and labeling of foods containing wheat, gluten, dairy, eggs and soy. And consumers are equally concerned that their food is being prepared in a facility providing safe and humane working conditions for its employees. 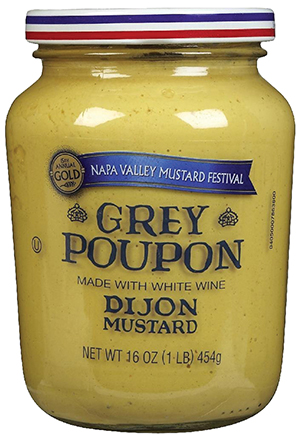 “With the FSMA, the FDA is moving from the old food safety approach that reacted to potential harm to a new, preventive framework that puts greater responsibility on the food industry to identify potential risks to the safety of the food supply and counter the risks before harm occurs,” reads the report.

While that approach is great for consumers, it also impacts the bottom line for F&B companies implementing measures that mitigate risk. Putting in additional production lines to keep cross-contamination from occurring or to add improved methods of processing requires significant capital investment.

“The factors we’re addressing — food safety/regulations, plant efficiency, cold storage, demographics/consumption patterns — impact siting and operational decisions for food processing facilities,” says Chris Copenhaver, co-lead of the Food and Beverage Practice at C&W. “A food manufacturer’s ability to operate within a complex regulatory environment while efficiently operating their plant and effectively managing their food supply chain — which may have a ‘cold chain’ component — all while being laser-focused on satisfying the preferences and changing tastes of the end consumer, is the name of the game. An inability to achieve any of these objectives can cripple food enterprises. Siting considerations are often made with the goals of making the achievement of these objectives possible.”

Despite the challenges, the F&B sector is growing at phenomenal rates. According to the C&W report, the US saw 1,691 food processing project announcements from 2011 to 2015. Copenhaver offered background on the report’s data.

“Our definition of food processing projects was broad,” he says. “For the analysis, our research team used North American Industry Classification System (NAICS) codes and U.S. Census Bureau data on the number of establishments. An establishment is generally a single physical location where industrial operations are performed, for example a factory, mill, processing plant, etc.” 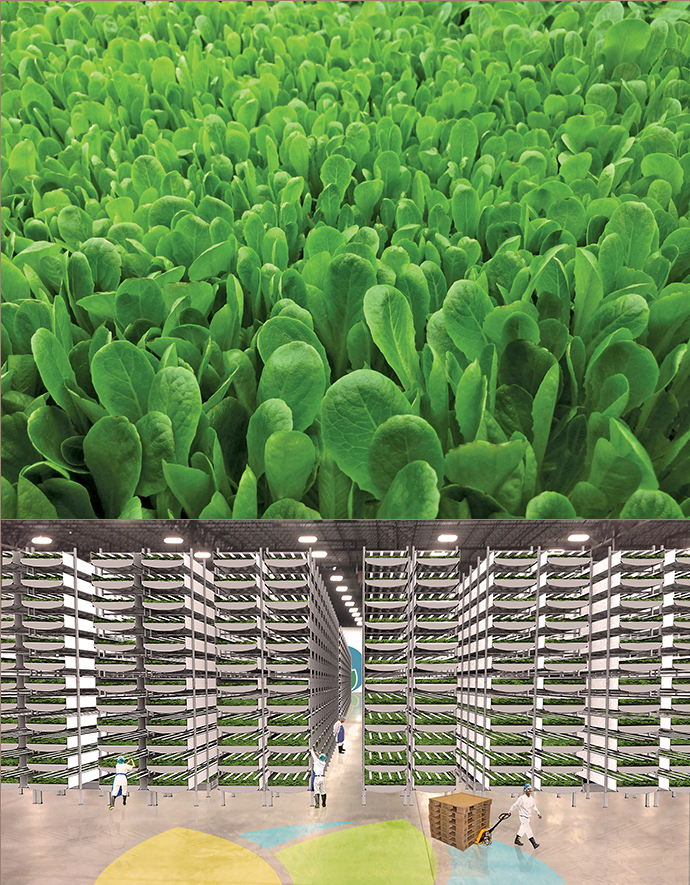 Aerofarms’ growing operations in Newark, New Jersey, can grow up to 2 billion pounds of organic greens per year.
Images courtesy of Aerofarms

The team looked at the number of establishments under the Food Manufacturing sectors and then at sub-sectors — everything from Animal Food Manufacturing and Grain and Oilseed Mining to Bakeries and Tortilla Manufacturing. They compared the data with C&W’s internal proprietary database and other third-party data sources.

The news was good. “Since 2011, there has been a clear upward trend in both new and expansion projects, and growth is accelerating,” the report states. “In 2015, we enjoyed the greatest number of food manufacturing project announcements of the past five years with 249 expansion projects and 155 new projects. We expect this trend to continue and for the 2016 tally of food manufacturing projects to surpass the prior-year level.”

East to West, Fresh Is Best

The farm-to-table food movement doesn’t just apply to restaurants. Time is of the essence when satisfying the consumer’s desire for the freshest and safest foods possible.

“The closer a food manufacturer is to its supply chain and consumers, the lower its delivered costs will be,” Copenhaver says. “Sites that have good highway accessibility, an assortment of rail-served and non-rail-served properties, located in close proximity to third-party cold storage facilities or other needed support services, have a distinct competitive advantage.”

“A food manufacturer’s ability to operate within a complex regulatory environment while efficiently operating their plant and effectively managing their food supply chain … is the name of the game.”
— Chris Copenhaver, Co-lead, Cushman & Wakefield Food Division

“Having a 200,000-square-foot facility east of the Rocky Mountains improves efficiency and available delivered shelf life on the company’s fresh, natural and organic products,” said Harry’s CEO Jamie Colbourne. The reduced distribution distance creates an added benefit for the environmentally conscious company. Harry’s plans to hire up to 100 employees with the facility operational by the end of 2016.

Grocery stores continue to add coolers for pre-packaged fresh foods consumers want. In the past five years, public refrigeration space increased 2 percent and private space increased 5.3 percent, figures that will only rise with increased demand, says the C&W report. Energy costs and reliability play a significant role in location decisions for food producers. Food producers require energy service with substations close by that can offer excess capacity, natural gas lines that are available at property boundaries, and access to a reliable water supply that can grow with the needs of the facility.

Who wants fries? Everyone, it appears. Euromonitor predicts that that the frozen potato category will grow 2.6 billion pounds by 2020. To that end, ConAgra Foods, Inc. announced in May that it will invest more than $200 million and add 128 full time positions at the company’s Lamb Weston facility in Richland, Washington, by adding a French fry processing line. Construction began immediately with completion expected in fall 2017. The added line is expected to increase annual processing capacity by more than 300 million pounds.

Since 2011, there has been a clear upward trend in both new and expansion projects, and growth is accelerating.
— Food Manufacturing Update, Cushman & Wakefield

Do you know where they make the Grey Poupon? That would be the Kraft Heinz plant in Holland, Michigan. The company is investing $17.2 million to expand its Holland facility, adding production of the iconic brown mustard brand to its current lineup of products, which includes yellow mustard, pickles and barbecue sauce. The expansion will add an additional 50 jobs to the plant.

Companion, a commercial bakery founded in St. Louis, recently opened a new $5-million baking and retail complex in nearby Maryland Heights, Missouri. The company had outgrown its previous facility and was looking to create a production space that was completely unique, not unlike the artisanal loaves they’ve churned out since 1993. Approximately 70 percent of Companion’s business takes place in the fresh-baked space. The move allows for growth of the frozen par-baked side of the business. The 41,000-sq.-ft. (3,810-sq.-m.) facility combines a bakery with education space as well as a café where visitors can watch the baking process through floor-to-ceiling glass walls. 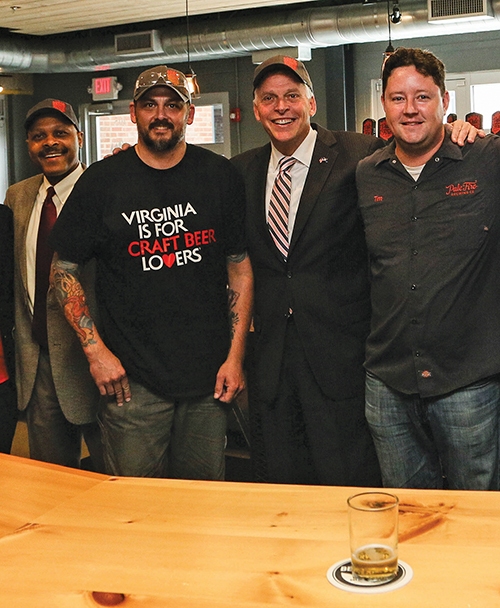 Thanks to the state’s logistical advantages, German-owned Develey Mustard & Condiments Corporation is locating its first North American production facility in Dyersburg, Tennessee. The company is renovating a 100,000-sq.-ft. (9,290-sq.-m.) facility and investing $20 million in the operation, which will create 150 new jobs over the next five years. Develey is a leading producer of mustards, dressings and sauces in Europe, and exports to more than 50 countries worldwide.

Aerofarms, an innovative Newark, New Jersey-based agricultural company, is bringing its unique vertical farming system to urban sites on four continents. Currently, the company is growing pesticide-free organic greens in a 70,000-sq.-ft. (6,503-sq.-m.) warehouse in Newark. Aerofarms uses post-consumer recycled and reusable cloth to hold the plants instead of soil, LED lights instead of sunlight and mists the roots with nutrient-enriched water. The result is a healthy harvest of up to 2 million pounds of greens per year for sale and distribution.

As with other types of manufacturing, the skills gap is alive and well in food production as the complexity of equipment and the need for technical skills increase. The National Skills Academy for Food and Drink (NSAFD) in the UK recently sounded the warning that one-third of the sector’s workforce will retire by 2020, and called for manufacturers to increase the number of apprenticeships. The NSAFD launched a website, tastycareers.org.uk, to introduce young people to the types of jobs and training available for a career in the food and beverage industry.

In the US, the Food Processing Suppliers Association (FPSA) has stepped up efforts to change the image of food manufacturing by focusing on the high tech skills the industry now requires, and supporting efforts to assist students headed to community college and university food science programs. The FPSA announced recently that its Meat Industry Suppliers Alliance (MISA) Foundation raised more than $125,000 to support the organization’s scholarship program, offering $10,000 grants to students who will study meat sciences at universities throughout North America.

Cushman & Wakefield’s Chris Copenhaver points out that food production requires refrigeration and repair technicians in addition to maintenance mechanics. Companies often need two-year science and biology technicians, quality control specialists and skilled production workers. “Training programs offered by a community or technical college with a curriculum designed for the food industry can be a big plus,” he adds.