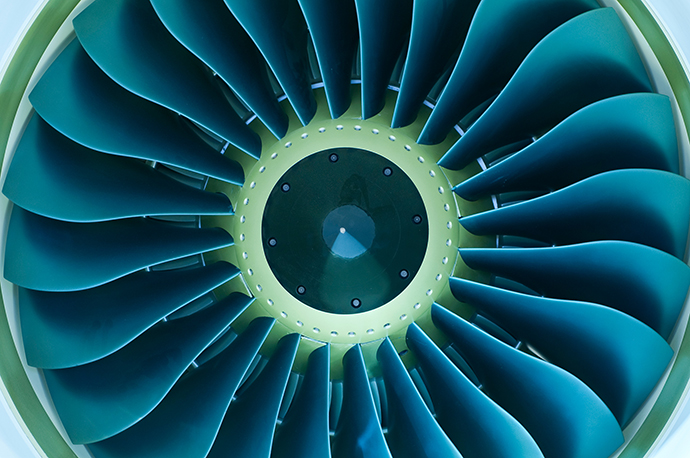 Commercial aircraft manufacturers can’t make passenger jets fast enough to meet global demand. But that doesn’t mean that areas home to their production facilities will enjoy the privilege of hosting them indefinitely. They’ll need to compete even more aggressively for investment in the aerospace and defense sector, especially now that it’s back in growth mode.

Deloitte Touche Tohmatsu Ltd.’s 2016 Global Aerospace & Defense Outlook predicts revenue growth of 3 percent for the year, following three consecutive years of revenue declines. Trimmed defense budgets, particularly in the US, were behind those declines. But booming demand for passenger travel and air carriers’ fleet growth strategies are more than making up for that in the broader aerospace industry, resulting in revenue growth.

What are the location implications, particularly for those areas with established aerospace manufacturing clusters and new clusters? There are two implications, according to Tom Captain, Deloitte’s Global Leader, Aerospace & Defense Sector, who spearheaded his firm’s 2016 Outlook. 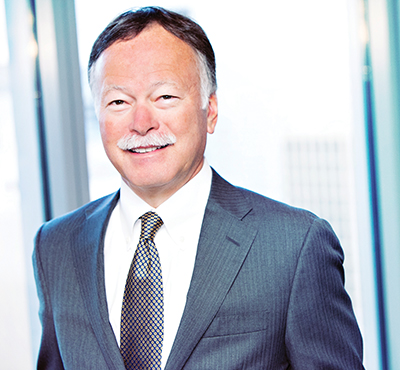 “The aerospace and defense industry has resumed its above-average growth trend, which portends good news for regions intent on attracting the industry to their locations,” Captain tells Site Selection. “For companies, it is a buyers’ market, with deals being offered by governments that are seemingly uneconomic. For governments, it is a tough, highly competitive market which will require outsized economic incentives, investments in infrastructure and job-training programs to be on par with what others are offering.”

Companies in revenue growth mode, like aerospace companies in 2016, can bring more leverage to location negotiations, notes Captain. “Aerospace companies continue to seek out locations that offer low cost labor, availability of a skilled workforce, low cost of living and economic development incentives from government authorities. Increasingly,” he adds, “OEMs are creating incentives for suppliers to co-locate in areas they choose for final assembly plants. The increased volume of companies locating manufacturing and distribution operations in Mobile, Alabama, and North Charleston, South Carolina, are good examples of this.”

Deloitte’s analysis points to the likelihood of new aircraft production programs emerging in developing regions. Captain says China and Canada are the examples most often cited. Airbus opened an A320 assembly facility in Tianjin in 2008 to meet demand from China’s booming civil aviation market. In September 2015, Boeing and Commercial Aircraft Corporation of China Ltd. (COMAC) announced plans to open a facility in China for interiors completion, paint and delivery of Boeing 737 aircraft to customers in China. Canada’s commercial airliner manufacturing industry is anchored by Montreal-based Bombardier, which recently won an order from Delta Airlines for up to 125 of its new C Series airliners.

“In the US, right to work states with a low cost of labor, such as those found in many Southern and Southeastern states, are targeted areas to expand for aerospace companies,” says Captain. As for investment in China, it’s not just aerospace OEMs, but companies involved in airport construction, air traffic control, ground radar and related businesses that want access to this huge and growing market, he relates.

But aerospace investment in China is not immune from reshoring. “Labor-cost arbitrage gaps have begun to shrink due to the rapid substitution of process automation and robotics for manual labor,” says Captain. “This in turn has led to some manufacturing to return to the US and Europe from Asia. Aerospace capital flow will go to countries and regions where there is still a labor cost advantage, availability of a skilled workforce, an offset sales opportunity and economic development aid being offered.”

Back to the Gym

Meanwhile, the aerospace sector’s high-intensity workout regimen is finally paying off, the Outlook points out. Shedding extra supply chain pounds was the first order of business.

“Crushing price pressure by airline customers on aerospace OEMs, and in turn their suppliers, despite the record-setting backlog of orders, is forcing costs out of the system — lower overhead, lower levels of inventory, fewer workers, fewer suppliers with larger purchase orders at lower prices and increasing application of efficient manufacturing operations,” Captain explains. “The commercial aircraft industry now employs a record low relative level of workers when measured on several metrics — numbers of workers employed to produce a ton of aircraft, per seat delivered, per aircraft, per revenue dollar, and so forth. The industry is undergoing what the automotive industry experienced in the last 20 years to become more efficient.”

Major assembly of the first Boeing 787-10 Dreamliner is underway. Boeing partner Kawasaki Heavy Industries, Ltd. began installing the circular frames into the midforward section of the fuselage on March 14, two weeks ahead of schedule.

This is a US market advantage, the Deloitte report asserts, particularly with respect to US companies’ recent success in improving employee productivity compared to companies in Europe and Asia due to “greater flexibility to rationalize factories, adjust employee levels and manage their cost structure in a timely manner.”

Another US advantage, according to Captain: “European companies have lower profit margins, partly due to government support for employee protection schemes. US publicly listed companies have pressure from shareholders to improve profit margins, which drives higher levels of efficiency, which makes them more competitive.” 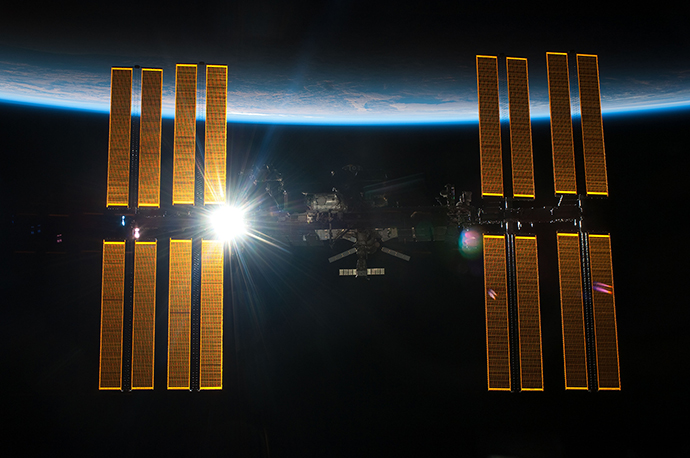 Backdropped by the blackness of space and Earth's horizon, the International Space Station is featured in this image photographed by an STS-134 crew member on the space shuttle Endeavour after the station and shuttle began their post-undocking relative separation.
Photo courtesy of NASA

“Supplier partners are critical to our growth and success,” said Mark Mulqueen, Boeing ISS program manager. “It’s important to Boeing and our NASA customer that we commit significant resources to growing our small business network through targeted outreach, mentoring programs and regular collaboration.” 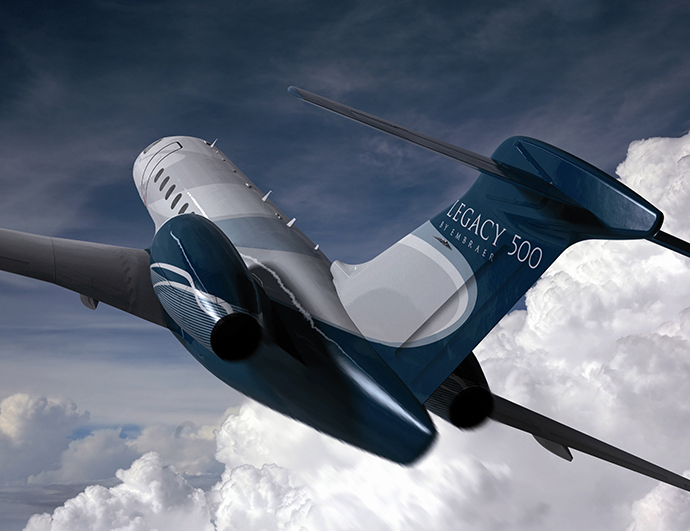 Embraer began production of its Legacy 450 and Legacy 500 Executive Jets in Melbourne, Florida, in early June. To accommodate the Legacy production, the company added 236,000 sq. ft. (21,925 sq. m.), doubling the size of its existing facility, which is also home to production for the Phenom 100 and Phenom 200. The expansion included four new buildings: an assembly hangar, paint facility, completion center, flight preparation center and a new delivery center. Embraer currently has nearly 600 employees in the area. They plan to add 600 new jobs through 2020 as a result of increased production.

“In 2008, at a time when companies were downsizing, it was Embraer who selected Brevard County for its first US manufacturing and customer design facility,” stated Lynda Weatherman, president and CEO of the EDC of Florida’s Space Coast. “Today, and eight years later we are not only celebrating Embraer’s third completed facility in Brevard County, but its significant role in elevating our status as a global leader in the aviation industry.” 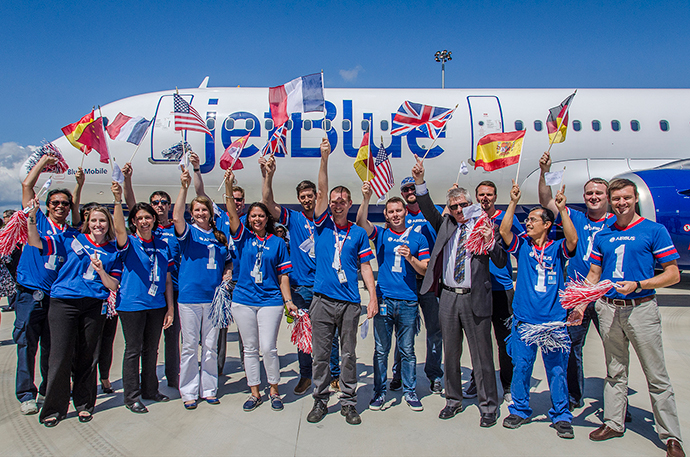 The UTC expansion will house the assembly facility for nacelle components — the aerodynamic coverings around engines.
Photo courtesy of Airwind Creative / Airbus

UTC Aerospace Systems plans to expand its Baldwin County, Alabama, aerostructures plant by building a new $30-million facility that will supply jet engine systems to the Airbus A320 Family assembly line in Mobile. The 80,000-sq.-ft. (7,432-sq.-m.) production facility will house the nacelle component assembly and propulsion system integration. The expansion will create 260 new jobs. Initially, the focus will be on the conventional engines for Airbus passenger jets, eventually expanding to include the new engine option, or neo. 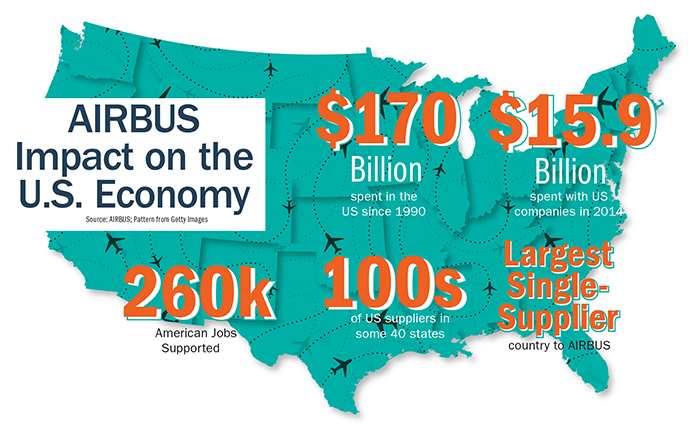 “We chose Foley to expand because of its proven track record of performance, our desire to be near a key customer, and the tremendous cooperation we’ve had from the state, county and the city,” said Marc Duvall, president of UTC Aerospace Systems’ Aerostructures business.