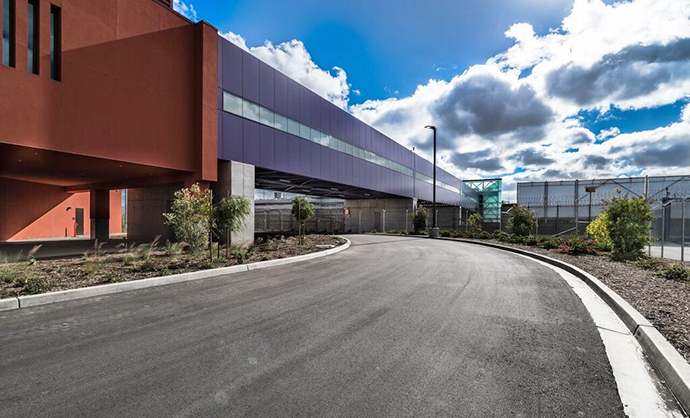 New walls are going up between the United States and Mexico. They run along the sides of a new pedestrian skybridge making it easier to cross the border.

The Cross Border Xpress (CBX) skybridge connecting a new passenger terminal in San Diego directly to the Tijuana International Airport (TIJ) opened for business in December 2015. It’s located between the existing San Ysidro and Otay Mesa border crossings, and was designed by Legorreta + Legorreta and Stantec in conjunction with the U.S. Department of Customs and Border Protection to serve the 2 million annual TIJ passengers who already cross the US/Mexico border as part of their travels. TIJ serves more than 4.5 million passengers per year overall, flying to 34 destinations throughout Mexico operated by four major airlines, as well as boarding three weekly flights to Shanghai.

CBX is one of many projects making cross-border movement easier, and thereby aiding and abetting commerce, trade, economic development … even shopping.

Not far away, there’s a new pedestrian border crossing called PedWest opening July 15th. Right next door on the US side is The Outlets at the Border complex from The Shamrock Group, which opened in 2014. The PedWest entrance will have 12 lanes that connect with Mexico’s El Chaparral facility, 10 of which will serve pedestrians entering the US.

The San Ysidro Port of Entry in San Diego, the largest land border crossing between Mexico and the US, sees an estimated 30,000-40,000 pedestrians cross each day. PedWest will open on the west side of the port’s vehicle lanes.

The Cali-Baja region and U.S.-Mexico binational economies lose $6 billion annually due to long delays in getting trucks carrying freight across the US- Mexico land borders in San Diego, according to a study done by the San Diego Association of Governments. The Desert Line could change that in one fell swoop.

“This joint project has been anticipated for a long time,” said Fernando Beltran, president of Baja Rail. “It will help our maquiladoras continue to thrive. It will help our economy. And it will stimulate a new cooperative business relationship between our two countries.”

Once work on the line is completed, it will allow trains up to 30 cars to travel on the line from Mexico to Coyote Wells. There, cars will be assembled into 100-car trains for delivery to the Union Pacific Railroad in Plaster City. To accommodate this activity, a new intermodal facility will be built in Coyote Wells by PIR.

Rail investments with the binational economy in mind are unfolding further east too. Jarl Pedersen, chief commercial officer, Port Corpus Christi, says being the closest deepwater port to bustling Monterrey is a strong asset, as is having three Class I railroads — BNSF, Kansas City Southern (KCS) and Union Pacific. “Mexico is investing a lot in port infrastructure right now,” Pedersen says in an interview. “With rail through Laredo, we’re in a good position to supply all these refined products to Mexico,” especially as the petrochemical sector south of the border opens up in the wake of new energy policy reforms.

Dallas-based BNSF Logistics in May announced a new subsidiary in Mexico, BNSF Railway Servicios de Logistica, to be based in Monterrey. And Kansas City–based binational railroad Kansas City Southern (KCS), which has been building relationships in Mexico for some time, last July opened a new $64-million intermodal terminal in Wylie, Texas, part of the DFW metro area.