Driven by its innovation ecosystem, California is golden again. 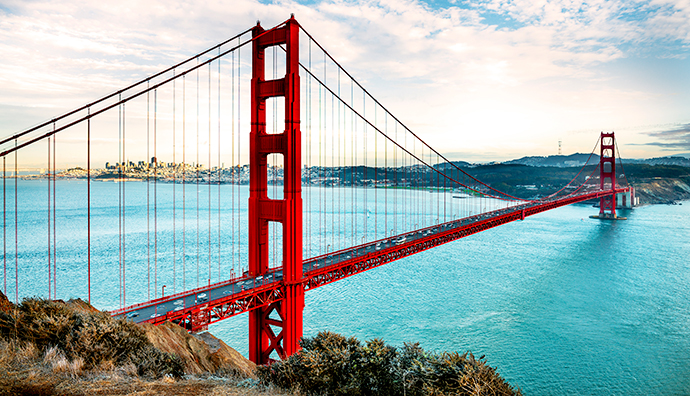 San Francisco’s performance embodies what a creative and scientific economy is all about.
Photo by ventdusud, courtesy of iStock
by ROSS DeVOL and MINOLI RATNATUNGA, Milken Institute

California presents a unique dichotomy in terms of evaluating its attractiveness as a location for existing firms and those from outside the state looking to expand business operations. California suffers from the widely held perception that it is inhospitable to businesses in terms of tax policy, regulatory regime and other costs of doing business. On the other hand, California holds a unique position among the world’s innovation-driven economies. The state’s metros have diverse technology and knowledge-based industries, strong research institutions that provide unrivaled human capital and valuable intellectual property, an entrepreneurial culture aided by a deep pool of immigrant entrepreneurs, and the early-stage risk capital to bring innovations to market. 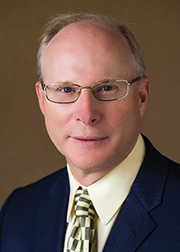 The Milken Institute’s annual Best-Performing Cities provides a scorecard to evaluate performance on outcomes-based criteria in order to gauge how California’s metros are doing, given their unique mix of push and pull factors. Among those criteria are job creation, wage gains, and technology trends that shape current and potential patterns of growth. For metros looking to craft cohesive economic strategies, the report provides valuable data and insight.

California secured six of the Top 25 slots among large metros in our 2015 Best-Performing Cities, the most in any one state (see chart). Move over Texas, you no longer hold this distinction, thanks to the plummeting price of oil and the attendant decline in exploration activity.

Four of those six cities are in the tech-driven San Francisco Bay Area, led by No. 1 San Jose-Sunnyvale-Santa Clara, and closely followed by San Francisco-Redwood City-South San Francisco.

The economy of the San Jose metro division has been red-hot, demonstrating how an innovation-fueled ecosystem can overcome high costs of doing business and a restrictive regulatory environment. San Jose had the highest job growth rate in the nation in 2014 (4.6 percent) among metro areas with a population exceeding 1 million. Its relative job growth has accelerated in 2015. In the 12 months ending August 2015, San Jose’s job growth was the second-highest among the nation’s 200 largest metropolitan economies. 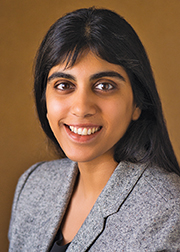 High-tech hardware continues to play a prominent role in the metro’s success, but it is the high-tech service sector that has been the primary source of job growth in the region. Professional, scientific, and technical services added 8,700 jobs (7-percent growth) in 2014. Recent data suggests that the pace of growth accelerated through the end of 2015. Other information services had a job gain of 6,400 (23.6 percent) in 2014 and saw employment double in the five-year period measured. Data processing, hosting, and related services recorded job growth of 5.1 percent in 2014. Patent registrations hit 17,000 in 2014 — a new record. Venture capital investments increased to $9.8 billion — the highest total since 2000. Average annual earnings were $116,000 versus just $61,500 for the nation overall. The metro also had 23 initial public offerings and 8,600 startups in 2014.

High-skilled human capital provides the fuel for much of this business activity. In the San Jose metro division, 21 percent of adults aged 25 and older have a graduate degree, in contrast to only 11 percent nationally. Over 46 percent of adults in the metro hold a bachelor’s degree or higher. Many of the entrepreneurs and technical degree holders are immigrants.

In the 12 months ending August 2015, San Jose’s job growth was the second highest among the nation’s 200 largest metropolitan economies. San Francisco’s was third.

San Francisco’s economy demonstrates just how the clustering of talent and technology creates the sorts of advantages that allow a dense city to offset the disadvantages of high costs and a regulation-heavy regime. Over the last 12 months, it was third in the nation in job growth. It was first in wage growth during the most recent five years. (Exhibit A: Uber, which is building a new headquarters, and in February listed nearly 380 open career positions in San Francisco.) For a dense urban area, ranking third in job growth across all metros — many of which don’t face the same space constraints as San Francisco — is an unrivaled accomplishment.

San Luis Obispo-Paso Robles-Arroyo Grande rose 14 places to join the Top 10 this year. The region is expanding its small high-tech base, but agriculture, tourism and government employment remain its key industries. California Polytechnic State University in San Luis Obispo is investing in its campus and will stimulate employment in the construction sector in coming years. Cal Poly has also leased space in downtown San Luis Obispo for its Center for Innovation and Entrepreneurship to house and encourage student entrepreneurs to learn, collaborate, and create businesses in the local community. Programs like these draw on Cal Poly’s emphasis on “Learn by Doing.”

San Diego-Carlsbad moved up three spots to 19th place. As in other tech-heavy metros, professional, scientific, and technical services have also contributed significantly to economic vitality. The region is recognized as a hub for research, and strong partnerships between industry and research institutions foster commercialization and entrepreneurship. 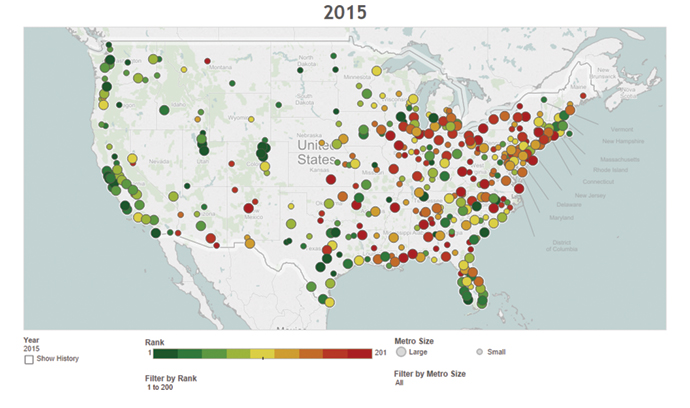 The San Diego Regional Economic Development Corp. estimates that the university and independent research centers have a $4.6-billion economic impact (both directly and through the ripple effects of supply-chain and consumption spending and employment). With this research focus and the highly skilled workforce that it attracts, the region is well-positioned to capitalize on emerging industries such as consumer and military drones, data mining and cybersecurity.

San Rafael debuts at 23rd place. It is a new metro on our index, added as part of the adjustment after the 2010 census. The city has enjoyed exceptionally fast high-tech growth, benefiting from the tech boom in the Bay Area. As rents in San Francisco continue to rise, the metro is poised to absorb more spillover jobs and investment. With an educated population and established players in the software industry such as Autodesk located in the metro, San Rafael is well-positioned to claim its share of the explosive growth in the industry. San Rafael also houses a lively biotech cluster, which includes the headquarters of innovative companies such as BioMarin and Raptor Pharmaceutical Corp.

Santa Rosa enters the Top 25 leaping 96 spots to 25th. Strong performance in one-year wage growth and in jobs added over the last 12 months contributed to Santa Rosa’s high ranking this year. Situated in the booming Bay Area, the region may also attract companies and new residents seeking relatively more affordable real estate. Despite the ongoing California drought, the metro’s core local wine industry is doing well. There is some concern that tourism will suffer if the drought continues, as landscapes would be less appealing and water conservation measures could affect restaurant and hotel offerings.

Most other California metros rose in our 2015 ranking — the major exception being Bakersfield, which suffered from the same factor as many Texas metros: plummeting oil prices. The bottom line: An entrepreneur-driven, innovation-based ecosystem can offset much of the higher taxes, business costs and regulations in California. The Golden State is truly golden again.

In addition to ranking the 200 largest U.S. metropolitan areas, the Milken Institute’s 2015 Best-Performing Cities report includes a companion index that measures the performance of 201 smaller cities, accounting for 22 more metros than in years past in order to reflect changes made after the 2010 US Census. The highest-ranking California city among the small metros was Napa, up 13 spots from its 29th-place ranking in 2014. The city to the north of the Bay Area in the heart of its eponymous wine region rose thanks to top-15 rankings in job growth measures, and a No. 17 finish in wage growth.