Pay As You Go

Paradigm shifts are a dime a dozen. But the leaders of Aligned Data Centers say this one’s for real. 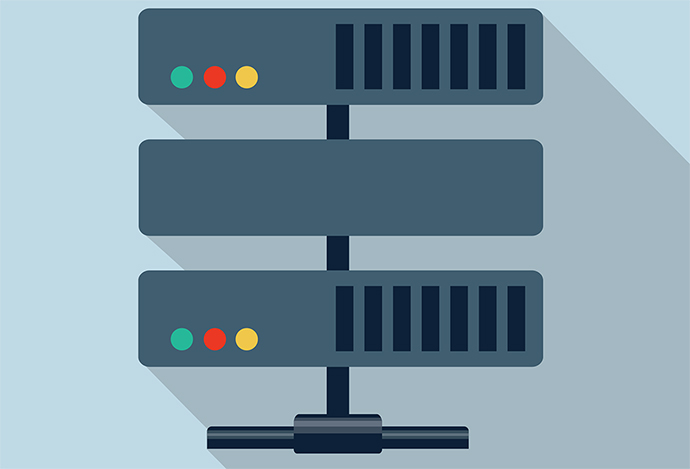 With the November 2015 opening of its new data center in Plano, Texas, Aligned Data Centers put an exclamation point on a market entry that includes another new ultra-efficient site in Phoenix, and site selection processes underway for other sites in California, Illinois, Virginia and New Jersey.

“When I started in the business, data centers were kind of a rounding error,” says Aligned Data Centers founder and CEO Jakob Carnemark, whose 25 years in the sector include working with IBM on data center infrastructure in the 1990s, then leading a mission-critical facilities team at Skanska. He says two fundamental changes have become apparent. 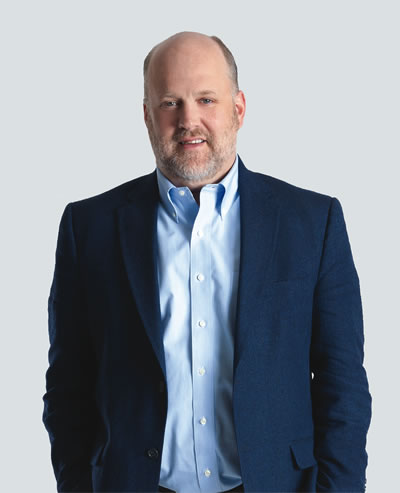 “One is that rack densities are getting much more variable,” he says. What used to stay in a well-defined and manageable range today might have to deal with anything from 3 kilowatts to 30 kilowatts. Trying to plan for that is a nightmare.

“There’s no way to provision without massive amounts of waste,” he says. “Build for 30 kilowatts and use three, and you spend 10 times what you needed to, on things like big expensive chillers. The second issue is the power curve. The loads inside are getting much more variable, because the stack is doing a good job of instituting technology. We started to think about what it would look like with more elastic infrastructure, and also trying to solve the efficiency and reliability issue. One problem with variable loads is that traditional chillers and electrical systems are inefficient with a low load, and highly unreliable under dynamic loads. We had the epiphany — nobody is doing anything about the infrastructure, and that will be the cost driver.”

Tune the data center to the IT load, and suddenly trying to predict IT density is no longer an issue.

“The founders of Aligned, as they built these very large data centers for the big banks and telcos, observed the dramatic underutilization of servers,” says COO Tom Doherty, whose 35 years include co-founding the Washington, DC, division of WB Engineers+Consultants, serving as director of real estate for Verizon and working as a project engineer at Syska Hennessey Group. “And in that process everybody goes and builds these huge central utility plants. It’s a tremendous waste, and millions of dollars are being spent.”

So the Aligned team reinvented the whole infrastructure that supports data centers, beginning with how to cool them more efficiently by using a variable mechanical system that worked alongside the dynamic range of a working data center, removing heat (like a heat sink in a mobile phone) rather than cooling. It’s dramatically more efficient, says Doherty, and enables Aligned to be the first “pay-for-what-you-use model.” Moreover, instead of taking 18 to 24 months to build utility plants, the data center capacity build-outs can happen in eight weeks.

All About the Tech

In addition to experience, the two bring a potent combo of new technology and unique business model that they see as a watershed (and they do mean watershed) in the industry.

The company is a division of Aligned Energy, which also counts in its stable Karbon Engineering, a design and commissioning firm; Inertech, a technology firm that patented a conductive cooling infrastructure used by Aligned; and Energy Metrics, a business intelligence software firm. The company guarantees a data center power usage effectiveness (PUE) rating of 1.15. By comparison, most multi-tenant data center providers operate at a PUE of 1.3 or higher. A higher PUE translates into a higher monthly power bill for the customer.

“I spend my life studying this problem,” says Carnemark. The technology was specifically designed to be installed in parallel to existing chiller plants, so there’s no down time. “Then migrate off your existing chiller plant,” says Carnemark. “It gives a path for companies to fix their current data center infrastructure. The PUEs at big legacy data centers are 1.5 or 1.7 or 2.0. We retrofit to get to 1.5 or 1.2 PUE, and have an operational payback on the infrastructure.”

Moving from those giant, expensive chiller plants is the core challenge.

“You can’t shut down a data center — it’s like replacing the engine in a car while it’s moving,” says Carnemark. “For big companies with outdated infrastructure that has to be replaced, replacing it is incredibly costly and incredibly risky. But why not come up with a design like a distributed heart pump system? Then, when ready, shut down the heart. That was one of the key drivers of our technology.”

“Everybody goes and builds these huge central utility plants. It’s a tremendous waste, and millions of dollars are being spent.”
— Aligned Data Centers COO Tom Doherty

ADC, launched in August 2015, claims that it can minimize the upfront commitment for power and space by up to 70 percent by not locking customers into a fixed ramp schedule, and instead charging on a pay-for-use basis. 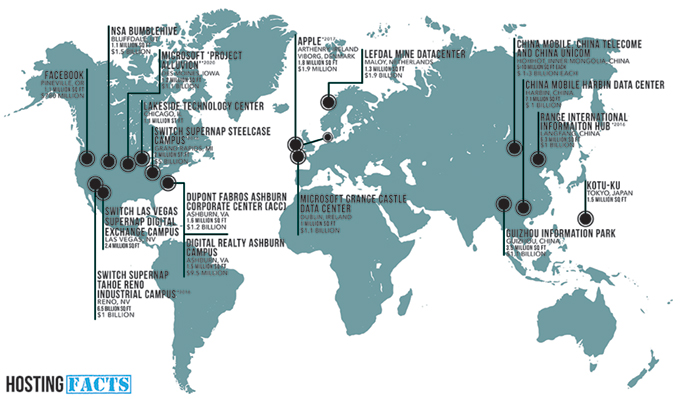 “It’s difficult to know what your requirements are on an IT planning basis. Our offering allows them to really not know, and only pay for what they need when they need it,” Doherty explains. “It enables a substantial reduction in costs. With most competitors, because of the static nature of the design, when you ask for two megawatts, you have to pay for that from day one.”

Moreover, the company’s patented cooling system — like the cactus coolers familiar to those in the Southwest — consumes 85 percent less water than a similarly-sized traditional data center: If the facility in Plano were business as usual, it would consume approximately 51 million gallons of water per year — “enough,” says Aligned, “to fill 77 Olympic-sized swimming pools.” Therefore, says Doherty, from a site selection perspective, “you could almost say we want to go into some of these more difficult climates.”

The company’s transparency is another attractant: Among the things it gives away to anyone with an Internet browser is a colocation comparison checklist comprising 187 items. The list, should one choose to fully deploy it, allows a data center decision-maker to compare providers side by side (and, presumably, to compare those to going the enterprise route) across such detailed yes/no specs as “frequency of start-up testing for the generators (and the UPS?),” “client-defined access control list” and “rack densities supported without customization of space.”

“Dallas and Phoenix were to of the healthiest markets,” says Doherty, with a typical absorption rate of 1.5 years. A robust menu of telecom providers in both markets didn’t hurt: Aligned is working with five of the 14 providers in Dallas, for example, where low data transmission latency also ranks the area highly. Doherty says Phoenix doesn’t necessarily have data center demand, so much as “it’s really a function of people needing to move out of California because of the high utility rates.”

“You can’t shut down a data center — it’s like replacing the engine in a car while it’s moving.” — Aligned Data Centers Founder and CEO Jacob Carnemark

With Plano and Phoenix up and running early this year, Ashburn is the next target market, says Doherty, with Silicon Valley also in the company’s sights. Meanwhile, talks ensue with “all the big names” in the Internet economy, and discussions are taking place about growing internationally. But he’s careful not to give the impression the company is building six facilities a month. These are engineers, after all.

“It’s really a pull strategy,” Doherty says. “With what the model offer anyone in this space, we think we’ll likely get pulled into those markets.” Until that happens, the focus is on pulling operations, processes, sales, marketing and facility commissioning into an optimal cadence.

“We want to be certain everything we represent, we can do, and beta test,” Doherty says. “We want to be completely credible, and humble. We expect others will try to do this as well. But we think our offering is substantially different from what’s out there today. It gives our customers the chance to control their own destiny.”

Carnemark sees the data center space following the lead of just-in-time, lean manufacturing. Unlike other types of corporate facilities, data centers don’t have purposes other than pure use.

“It’s a big asset, with massive IT equipment, but it’s as dumb as a brick until an application lands on it and drives value,” he says. “It’s purely a factory for the IT and information age.”

What the Experts Say

A December 2015 CBRE Site Selection Strategies for Enterprise Data Centers report modeled the cost of constructing, commissioning, and operating a 5-MW data center for 10 years across 30 US markets. It found: 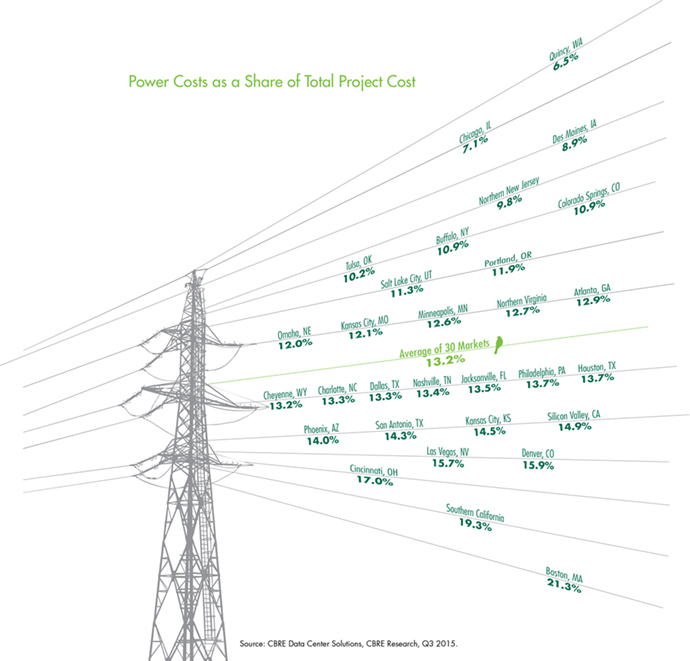 JLL's own report on North America, released in January 2016 and examining 15 key markets, found that multi-tenant data center providers experienced 6.1-percent growth and revenues of $115.3 billion in 2015. Noting the exodus of telcos from the data center services sector, the summary reads like an Aligned Data Centers playbook:

“The boost in demand by companies large and small for outsourced data centers, more specifically, the increase in migration to the “cloud” and the need for proximity to customers with multi-state or multinational operations are driving a huge wave of consolidation among data center providers that will carry through 2016,” said Jon Meisel, East Region lead for JLL’s Data Center Solutions. “Third-party providers are buying up whole competitors and individual data center facilities alike, in key locations that will support their strategic growth plans and enhance connectivity.”

That status could thus be ripe for the picking by those, like Aligned, who would transform the burden of a legacy into a leading-edge asset.