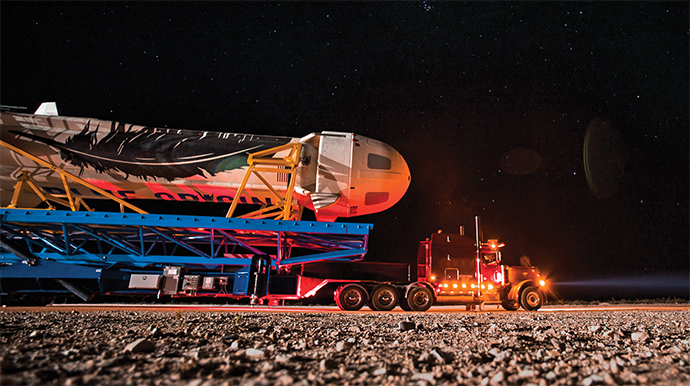 Blue Origin announced that Cape Canaveral will serve as the launch and manufacturing site for its Orbital Launch Vehicle.
Photo courtesy of Blue Origin
by PATTY RASMUSSEN

There’s no getting around it. Communities investing in talent development that creates a skilled labor pool have a significant leg up on communities that don’t. Lynda Weatherman, president and CEO of the Economic Development Commission of Florida’s Space Coast puts it even more bluntly. “Workforce is the future of economic development,” she says. “Yes, there’s a lot of corporate restructuring, on-shoring and foreign direct investment still coming, but for us to be successful and be able to attract companies in global competition, we have to have the workforce.”

Brevard County and its municipalities make up the Space Coast region, situated on the central Atlantic coast of Florida. As the name implies, the region is home to Kennedy Space Center and is no stranger to high-tech industries or advanced manufacturing. According to the Brookings Institution, the county is home to the highest concentration of overall manufacturing jobs in the state.

In the last year alone, several significant projects landed in Brevard County, including Blue Origin, a commercial space exploration company, which plans to invest $200 million over the next five years to manufacture, launch and support its Orbital Launch Vehicle (OLV) program. The project will create 330 new jobs. Aerospace company Embraer broke ground on a new Aero Seating Technologies facility which will house design, development and production for executive jet seating solutions. The company, which already has a significant presence in Brevard County, is investing $3.5 million in the new site and creating 150 jobs.

After years of successfully attracting companies to the region, Weatherman and her colleagues decided it was time to be equally intentional in developing the workforce. The EDC started a Talent Asset Pipeline (TAP) pilot program for manufacturing, with a two-pronged approach. First, the EDC turned to a certification program already in place, the Certified Production Technician (CPT) certificate from the Manufacturing Skills Standards Council (MSSC). The CPT uses assessments to measure an individual’s mastery of core competencies involved in manufacturing production. It’s the first step in a “stackable certification process,” and gives would-be employers immediate assurance that the certificate holder has mastered critical manufacturing functions, from standard safety and quality practices to processes and production.

“We get wrapped around the axle with competition for companies. We tend to forget that what we’re doing is making people’s lives better.”
— Lynda Weatherman, President and CEO, Economic Development Commission Florida’s Space Coast

Equally important was the need for an image and attraction campaign to educate the general public about the need for skilled workers in the manufacturing industry, and the relative simplicity of achieving proper certifications. The EDC surveyed its members and discovered that 80 percent were completely unaware of the CPT. “The ones who knew about it were the big guys. They were already using it,” says Claudia Devitt, senior manager of marketing and communications for Space Coast EDC. “The small manufacturers, the majority in our community, didn’t know about it. When they learned about CPT and what it certified, they said, ‘That’s what we need.’ ”

The EDC promoted the rigorous 10-week CPT certification classes, which are offered at nearby Eastern Florida State College (EFSC), to a mix of potential students — high school graduates, veterans or employed or underemployed people looking to transition into manufacturing. To date, five classes have completed the CPT certifications, with a sixth class set to graduate at the end of March. Out of those 49 students, 32 were already employed either in manufacturing or were in career transition. Of the unemployed students that completed the CPT, 50 percent have found jobs in the manufacturing industry; of those employed, more than half received a pay increase or promotion.

Along the way, the EDC inspired and aligned with some non-traditional partners. Pastor Nathaniel Harris of Macedonia Baptist Church helped launch the Pastors Community Alliance, a group of eight area pastors seeking to assist high-potential, unemployed individuals from their congregations in moving from education to employment. After a meeting with Weatherman, Pastor Harris knew he’d found an initiative that could work.

With financial assistance from private-sector donors, the Pastors Community Alliance created a small pilot CPT class in June 2015. The course consisted of online instruction and hands-on lab work taught by instructors at EFSC. The Pastors Community Alliance went even further to ensure student success, setting up a computer lab at Macedonia Baptist Church and establishing a mentorship program for students. Ten weeks later, four students from the pilot program graduated with their CPT certification. Two of the students went on to enroll in the associate’s degree program for Engineering Technology at EFSC.

“They wouldn’t have had the confidence to enroll without the CPT, but that barrier was gone,” says Elizabeth Huy, senior manager of Business Development for Space Coast EDC. “They had a relationship with the college, understood financial aid and they had a semester of college under their belt because in Florida the CPT articulates into 16 credit hours toward certain STEM degrees.” A second class formed by the Pastors Community Alliance is currently underway.

“Someone very active in the EDC called me as I was driving back from the graduation,” Weatherman recalls, “He said that was the most important thing the EDC has ever done. We get wrapped around the axle with competition for companies. We tend to forget that what we’re doing is making people’s lives better.”