Editor’s Note: This article is abridged. The full version can be found in the Sept. 2015 edition of the IAMC Dispatch Newsletter on www.iamc.org

How do corporate real estate executives view the consolidation trend taking place among service providers? There are some concerns, such as pricing and service quality, but for all of the corporate executives we spoke with, it comes down to the individual relationships they have with their providers.

It’s easy to make the assumption that larger users would gravitate to larger providers, and indeed some corporate users prefer to stay in the rarified air of the global brokerages. But there are others who mix larger providers with boutique firms, largely in a quest to get coverage in secondary and tertiary markets. And in that mix they find both the structure and methodologies of a corporate environment and the passion that can come only with a small shop.

The bigger-is-better race is on, and large providers are hustling to link up with [merge or acquire] firms that can broaden their bench strength or, at the very least, add flags on their coverage maps.

Big or small, the selection of service providers is based mostly on an incalculable factor: “Relationships and trust,” says Dmitry Dukhan, VP of real estate operations for medical manufacturer and distributor Medline Industries in Mundelein, Ill.

“It’s really all about the individual. As these mergers come and go, I’d follow one person from one company to another.”
— Charles Waltz, BASF

Florham Park, N.J.–based BASF Corp. is a global entity with double the portfolio of Medline in the Western Hemisphere alone — close to 300 locations in North and Central America, according to sites manager Charles Waltz.

“It’s really all about the individual,” he says, to the point that, “as these mergers come and go, I’d follow one person from one company to another.”

Doyle Shea, senior manager of global real estate for 3M in St. Paul, Minn., agrees, and he is a prime example of using smaller brands and global houses to his firm’s benefit. 3M’s massive real estate holdings pace out to some 650 locations globally, two-thirds of which are leased.

Shea admits that the consolidation trend is a concern. “Because someone has more dots on the map doesn’t mean I’m going to get better customer service, and if there are fewer people competing for my work, most likely my pricing is not going to be as good.” Unlike his colleagues, he would not necessarily follow an individual who jumped ship post-merger.

But good or bad, global or boutique, it still all comes down not so much to the brand as to the account rep. Do users want market knowledge?

Of course. But, as 3M’s Doyle Shea points out, “Quite honestly we can work with anyone we want to. We prefer to work with people we can get along with and trust. The service providers become an extension of our office. They’re our face in Asia or Europe. I need to trust them. I need to know they’ll follow my process and help me educate our people.”

In other words, it all comes down to relationships.

Dealing with surplus properties can involve a host of challenges, including environmental issues and carrying costs. There may also be disagreements in an organization about a property’s market value and what to do with it. However, even for properties with environmental issues in remote locations there are often buyers looking to expand operations and get a great deal, and who may be comfortable with the environmental risks. Companies need to understand their costs associated with surplus properties, understand their risks and liabilities, and have internal agreement on how to proceed.

Denis DeCamp led a discussion among the experienced panelists about the challenges and opportunities of industrial surplus property. The panelists responded to a series of questions about the downsides and benefits of surplus property, the role of incentives, the interests and roles of various stakeholders and risk mitigation strategies.

“You’re at extreme risk of being called out for not taking appropriate steps with respect to these sites, both from an environmental standpoint and a sustainability standpoint.”
— Program Attendee

There are multiple challenges to holding surplus assets. 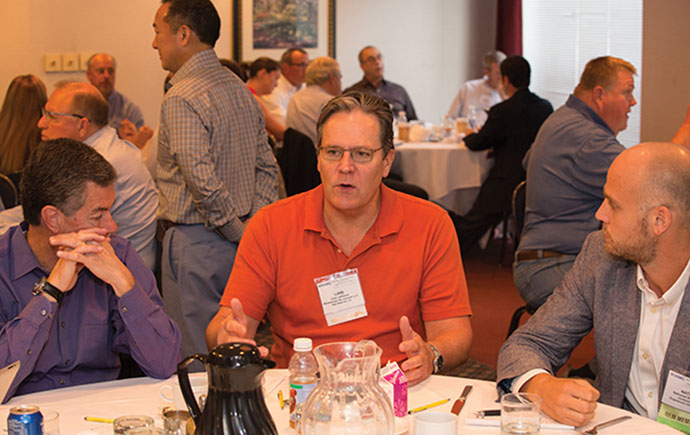 Other downsides include claims from government agencies or private parties, internal conflicts with corporate sustainability policies or other mandates, competing interests within a company, and internal disagreements about a site’s market value. For example, the CEO or the CFO may believe a site has a much higher value (example: $20 million), while the actual market value is substantially less (like $2 million).

While a few large cybersecurity breaches make the news, the reality is that every day US businesses and executives are under attack from hackers. Even though companies may have dedicated teams of professionals protecting customer data, production plans, trade secrets and more, any employee can be vulnerable. More than half of the corporate real estate (CRE) leaders in this session said they knew of a threat against their company.

The threat to US business is so great that the FBI director has ranked combatting espionage as the Bureau’s No. 2 priority, after terrorism. The FBI has a dedicated Economic Espionage Unit that provides training and outreach to help protect private industry. By sharing information, the FBI and businesses can work together to protect companies from threats from foreign military hackers and individuals.

Economic espionage is a major threat to U.S. business.

In recent years, economic espionage in the United States has increased by between 300 and 400 percent.

A hacker group collected about $300 million last year through ransomware; they attacked computers and demanded payment to release or unlock the files. In another case, a company estimated that with assistance from the FBI, it avoided a potential loss of $2 million to $20 million a day from an attack of ransomware.

You aren’t as safe as you think.

The only way to avoid being hacked is to not be on the Internet at all. “If you are on the Internet, everybody has the ability to hack you,” said FBI Special Agent Barry Spencer.

Gulfstream refuses to use cloud-based file sharing for its projects, and instead exchanges information on paper and in direct meetings, Ocasio explained.

Some examples of vulnerability:

The FBI is ready to help. 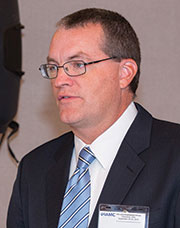 On behalf of the FBI, Spencer stated the desire of the Bureau to build relationships with the private sector, including the types of companies represented at IAMC. He encouraged IAMC members to come to the FBI with any questions or concerns. An FBI agent can come to a business and explain the threats, such as letting a company know if a type of file-sharing software it is considering has previously been hacked.