A walk down Main Street reveals a downstate region upbeat about the future. 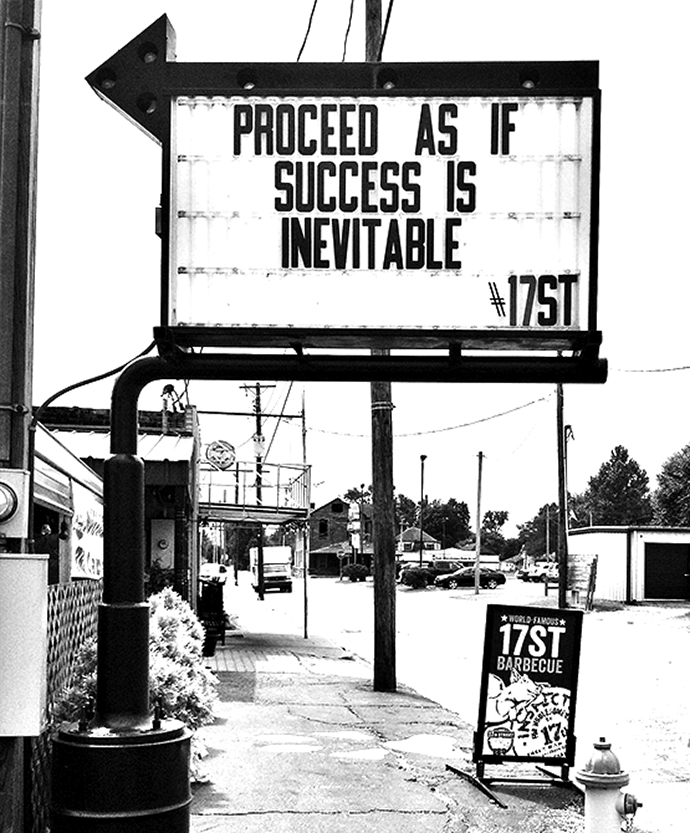 Small-town America is alive and well in Southern Illinois, best known for Carbondale, where Southern Illinois University and new broadband fiber have big impact. The region is also home to the towns of Herrin, Marion (where 88-year-old Mayor Bob Butler has been in office since 1963 and answers his own phone) and Murphysboro, where the state’s youngest mayor, Will Stephens, is shaking things up while hosting his weekly blues show on the radio. Murphysboro, home to an annual apple harvest festival, is also where you’ll find the world famous 17th Street BBQ just off Main Street.

That’s where 17th Street’s legendary founder Mike Mills, his daughter Amy (recently a judge on “Chopped”) and Mayor Stephens joined me last summer to tuck into a full rack of ribs and assorted sides, and to talk about the challenges and opportunities of rural America, in a state that Gov. Bruce Rauner is trying to turn more business-friendly, once a budget eventually gets passed.

“Southern Illinois has always been poor, and we’ve seen a great boom and bust with strip coal mining, which supported the lion’s share of the economy for years,” said Stephens, who was reaching out directly to every single Inc. 350 company leader with a personal phone call and invitation to his city, alongside a blown-glass apple made just down the street at the Douglass School of Art. Stephens blames workers’ compensation rates, among other factors, for the slow erosion of manufacturing in the region. “So they pull up stakes, and it makes it harder to sell your community, even though you have a lot going for you otherwise.”

When Mike Mills showed up in Murphysboro in 1941, it was a town of about 7,000 people. It still is. The shoe factory, jacket factory, label factory and glove factory are gone. But Mills and his daughter have grown his grandparents’ side business of barbecue sauce into a multi-faceted restaurant, mail-order, cooking school and sauce-making operation that employs 180 in Murphysboro and in Marion. 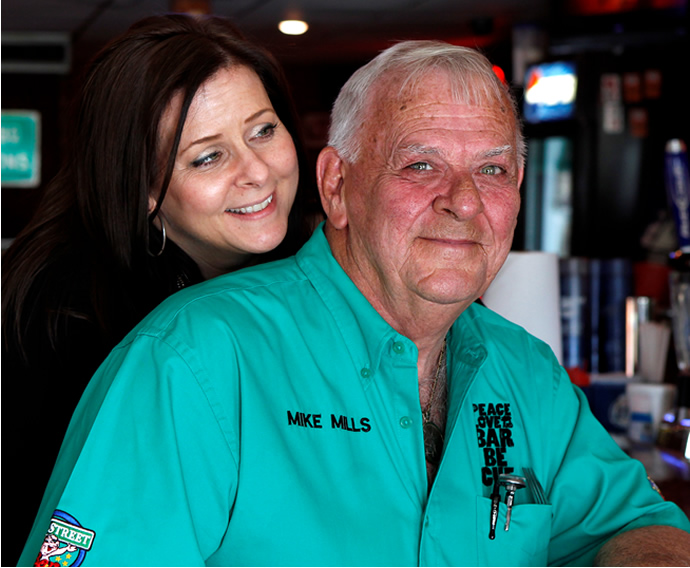 Amy Mills and her father Mike Mills continue to spread peace, love and barbecue in Murphysboro and beyond.
Photo courtesy of 17th Street Barbecue

The cooking schools — including a special workshop on cooking the whole hog — have drawn people from nearly every state and from 15 foreign countries. The Mills team also continues to accumulate man-sized barbecuing trophies from competitions around the world. With a new sauce plant about to become part of the world-famous 17th Street business, what began as a barbecue joint will soon employ nearly 200 Southern Illinoisans (pronounced “Illinoyans”).

At the next table Bob Chambers just happens to be enjoying dinner with his nephew. He employs 65 at Silkworm Ink, a high-quality silkscreen business he started 34 years ago in his basement. Today he’s adding 6,000 sq. ft. for a new production line.

“I look at all these distinguished alumni we have,” he says, “and the quality of life ... it’s amazing what you can experience in a 100-mile circle. It’s a beautiful place to be.”

It’s getting those alumni to stay that’s the challenge.

“Most who leave don’t come back,” Mills says of the area’s younger generations. “Amy has come back. She’s interested in the city where she grew up, and would like to see it grow to what it could be.”

Stephens’ personal CEO outreach campaign continues. Every business leader he’s talked to remembers the distinctive glass apple. Even just a few nibbles at his invitation make it worth the effort, he says. One of them might take a bite out of the now-empty Curwood packaging plant downtown, which owners at Bemis Co. are anxious to sell. Or they might want to take a fresh look at the city’s new tax-increment financing district, where the old Apple Tree Inn was demolished in February to make way for a future.

In Carbondale, Frontier Communications partnered with the city in 2013 to obtain a $31-million grant to enhance fiber for the Southern Illinois region. Today a gigabit connection runs east-west through town.

Up in the Air 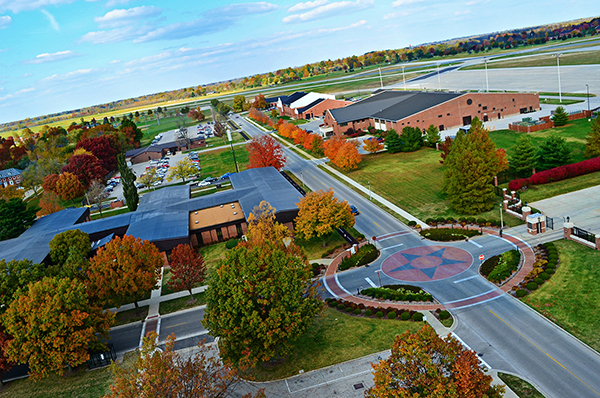 Among the economic development assets in Southern Illinois are two involving aircraft. Southern Illinois Airport in Carbondale is home to an aviation program at SIU that just moved into the brand new SIU Transportation Education Center. “No one has to put out resumes,” says Carbondale Assistant City Manager for Economic Development Gary Williams. “They always get jobs.”

Closer to St. Louis, Scott Air Force Base (above) in St. Clair County is the only Illinois site under consideration for the new site of the federal National Geospatial Intelligence Agency to be relocated from its current St. Louis location. The other three candidates are in Fenton, Mehlville and North St. Louis in Missouri. (St. Louis was chosen as the preferred alternative on March 31. - Editors)

“We have great broadband, and it goes right through our commercial district,” says Gary Williams, Carbondale’s assistant city manager for economic development, of a downtown area that went without measurable investment for a generation. Today Tartan Realty Group, known for its bets on college town real estate, is investing there. And people continue to take advantage of one of the busiest stops in Illinois for Amtrak, whose trains carry 130,000 passengers a year, many of whom make the pleasant five-hour journey to downtown Chicago.

Such infrastructure is helping companies such as Liaison, a metro Atlanta-based firm which also operates US sites in Santa Barbara, Calif.; Portland, Ore.; and Seattle, as well as European sites in Finland, the UK and the Netherlands. Liaison’s leadership team includes 1986 SIU-Carbondale graduate Larry Mieldezis, the company’s chief revenue officer.

A soft landing incubator overseen by Harfst and his team welcomed a single Liaison employee, which quickly multiplied to 20, and now has grown to 60 at another site in town. “They could hire 200, if we had them,” says Harfst, noting the region’s manpower challenges.

Mark Malis, vice president of human resources at Liaison, confirms that the company likes what it sees, at what is now its second-largest US location next to its HQ.

“No question, when we look at growth of managed services, we’ll continue to evaluate” the potential to expand in Carbondale, he says, “and if there’s a broader footprint we can utilize and sustain that level of growth, we’d like to do that.”

Malis says the site “has worked exceptionally well for us.” Strong ties to the SIU community help. And the school shows well even when compared to Liaison’s hometown ties to Atlanta-based tech talent juggernaut Georgia Tech. “There is a solid technology program on campus, so we are able to draw from that,” Malis says of SIU. “The beauty of SIU is we’re one of the prominent tech players in the community, so for students looking to stay in Southern Illinois post-graduation, no doubt we’re an employer of choice.

The continued high performance of the site inspired Liaison to move its customer support from its home base in Alpharetta, Ga., to Carbondale. It too has been a success, says Malis.

“Carbondale is a wonderful Midwest community. We like the values the residents and students bring to the organization. And sustainability is good there — people tend to stay. We’re committed to the community, have had great success there and have expanded on a variety of fronts. A lot of times, cities like Carbondale go a bit unnoticed. But these are really vibrant communities, and organizations sometimes are missing the boat when it comes to access to talent. It would be great to see other technology firms or call centers there. It doesn’t dilute our talent, it sends the right message.”

The message is that tech firms are not synonymous with slick big cities. They can find what they need in a funky college town too. “Leasing is more affordable, obviously,” Malis says, and cities like Carbondale meet the talent need too. “You just need to pay a visit to that portion of the country.”

Southern Illinois residents are known for not beating around the bush. Lately, that same feeling is coming from the state capital, of all places. Even as the legislature keeps struggling in budgetary quicksand, Gov. Bruce Rauner announced in January the formation of a new private, non-profit organization focusing exclusively on increasing Illinois’ competitiveness for job creation and investment, the Illinois Business and Economic Development Corporation (ILBEDC).

“Illinois is at a critical crossroad,” Illinois Department of Commerce Director Jim Schultz said, citing the state’s array of transportation assets and 200 higher education institutions. “There is no reason Illinois should not have a thriving economy. Yet we continue to lag behind other states and national averages, and we are losing a steady stream of businesses, jobs and residents to other states. Last year, Illinois lost an average 250 jobs a month and ended 2015 with 3,000 fewer jobs, in stark contrast with overall national growth. Middle-class families are hurting as traditional footholds like manufacturing are decimated, losing 14,000 jobs in 2015 alone. The result is families fleeing the state in droves — in 2015 more than 100,000 residents left Illinois.

“We must take decisive, focused action if we are going to reverse our state’s economic decline and put Illinois back on the path to growth and prosperity,” Schultz said. “The rigid structure and suffocating bureaucracy of the Department of Commerce hinder our ability to attract businesses to Illinois and to drive economic development. A mere 14 percent of Department of Commerce staff is dedicated to economic development activities, limiting the resources to attract and to retain business, which is a disservice to Illinois businesses and taxpayers.

“We must take a new approach to growth in Illinois,” Schultz said. “The status quo is no longer acceptable.”