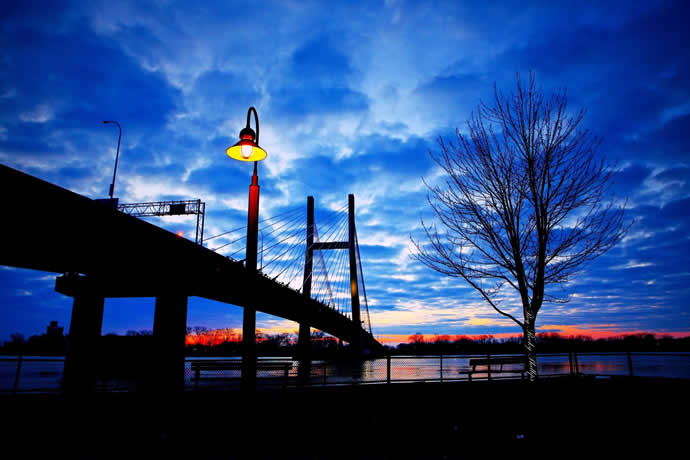 Like its sister river cities and towns, Burlington draws both sustenance and challenge from the Mississippi River.
Photo by Roy Rocky Phillips courtesy of Greater Burlington Partnership
by ADAM BRUNS

Tucked beneath the Great River Bridge in Burlington, Iowa, and even accessible by boat in season, sits Big Muddy’s Bar and Grill. The historic building the restaurant occupies, built in 1898 by the Burlington, Cedar Rapids and Northern Railroad, used to be known as the old Rock Island freight house, a transfer point for cargo headed north to Minneapolis or south to St. Louis and beyond.

Big Muddy’s has survived the floods of 1993 and 2008 during its 25 years in business. The high-water marks adorn the restaurant wall, talismans of the fighting spirit and camaraderie summoned by the owners, employees and patrons as they battled to save the business from the surging river.

This alternately breathtaking and heartbreaking dance with the Mississippi is familiar to any river-town resident. How a community chooses to deal with it is a likely indicator of how it will approach any challenge.

Burlington has chosen transformation, and the results speak for themselves: The bi-state metro has earned the 2015 Big Muddy Cup, awarded by Site Selection each year to the metro area along the Mississippi that welcomes the most corporate facility investment projects per capita, as tracked by the proprietary Conway Projects Database.

“We must respect the river — it’s an important infrastructure tool for us,” says Jason Hutcheson, president and CEO of the Greater Burlington Partnership (GBP), an organization which includes the chamber of commerce, economic development, convention and visitors bureau and Downtown Partners, Inc. “We have benefited for a long time from the ability to move commodities efficiently. Long term, as we see from RFPs, the ability to connect to the river will be more important. But we are subject to flooding. When the river rises, we have to flood fight.”

New infrastructure can help in that fight. The area recently won a grant to construct a flood wall. Hutcheson says it will take 15 years to install, but the $25-million investment will essentially protect the entire riverfront, from public and private assets to the railyard.

“We’re stifled with what we can do on the riverfront when subject to flooding every five or six years,” he says. “It will be transformative.”

Transformation is the operative word when it comes to the Greater Burlington story. It’s a familiar tune: Bustling industrial junction sees industries leave one by one, and becomes increasingly uncompetitive.

“Some of our industries we historically relied upon just dissolved,” says Hutcheson, not unlike other Mississippi River towns. But Burlington leaders made a conscious decision around the time of the Great Recession to turn around some aspects of the area’s business climate that had made it uncompetitive.

“The community of Greater Burlington decided we no longer were going to be losing projects, but be on the other side of the equation,” says Hutcheson. “Instead of losing existing companies, a significant effort was put forward to help them re-establish and re-emerge, with the right incentives at the right time to encourage them to modernize. We had to do something radical, to realign the cost structure, so they could be competitive within the US and across the globe. If you incent new machinery, for example, and those companies simultaneously negotiate competitive wage scales, suddenly you have a modernized facility that’s globally competitive and ripe for expansion. It started during the downturn, and has just continued.”

The Big Muddy Cup is awarded based on per-capita corporate facility investment project activity tracked by Site Selection’s Conway Projects Database for the 18 months from July 1, 2014, through Dec. 31, 2015. Projects must fulfill one of the following three conditions: at least $1 million invested; at least 20 new jobs created; or at lease 20,000 new sq. ft. of constructed space. Below are the top 10 metro areas for per-capita project activity along the river for the examined time period, and the top five areas according to total projects tallied. Baton Rouge, La., is the only area to make both lists.

“A lot of organizations look at business retention and expansion as one area, and attraction as another,” says David Toyer, GBP’s director of economic development. “They separate things out, with different lead lists. We try to pull all of that together — all projects to us are attraction projects. We’ve changed our mindset a bit about how we work on these things, and it’s helped a lot. The majority of our growth the last few years has come from existing businesses.”

The debut of a new four-lane divided US Highway 34 between Burlington and Des Moines, after years of lobbying, has functioned as an immediate economic development tributary. Investment also is landing on US Highway 61, which will eventually become a four-lane road as well. Area leaders hope to soon see that four-land connectivity extend east all the way to I-74 in Illinois, should that state’s budgetary debate ever come to an end.

As for fiscal infrastructure, the area pursued a pilot incentive program with Iowa’s Department of Economic Development that essentially allows communities on the state line to do a payroll TIF: “New taxes that otherwise would go to the state’s general fund are utilized for economic development projects over a 10-year period,” Hutcheson explains. “It wasn’t just for new jobs, but broadened to include retained jobs. The power of that is we’re talking millions of dollars into individual projects, for new and retained jobs.”

Hutcheson says companies justifiably examine a community’s debt level, as tax rates are likely to go up if revenues are shrinking. In Burlington, “because we had been losing population, revenues were shrinking, property values grew stagnant, and expenses were going up faster than property values. We had a new city manager come in and identify pinch points in the budget, and we took drastic measures. It was a painful process, with reductions to services and cuts to programs, but all with the end game in mind.” The debt agencies were satisfied with the plan, which offered reassurance to corporate citizens. The austerity is proving out: “Last fiscal year, the community ended with more than projected,” says Hutcheson, “and has held the tax levy steady for three years in a row now.”

Toyer says the city proper has a population of 28,000, but 41,000 live in GBP’s territory, including the county immediately across the river in Illinois. The labor shed comes from Illinois, as far north as Iowa City, and as far south as northeast Missouri.

Taking advantage of these business climate improvements are such companies as Silgan Containers ($100 million, 120 new jobs at Flint Ridge Business Park), GE ($7.5 million, 124 new jobs) and Shearer’s Snack Foods ($34 million, 150 jobs), which has pursued multiple expansions in the past couple of years. “Silgan is pleased to be locating our new facility in Burlington,” said Thomas Snyder, president of Silgan Containers, in February 2015, when the company announced Burlington would join its portfolio of 29 other manufacturing plants, including Iowa operations in Fort Madison and Fort Dodge. “Governor [Terry] Branstad and the Iowa Economic Development Authority were instrumental in our considering locations in Iowa, and the professionalism of the Greater Burlington Partnership, Mayor [Shane] McCampbell and the city’s development department were key factors in our decision.”

According to the Mississippi River Cities & Towns Initiative, the river is responsible for creating $400 billion worth of U.S. GDP and directly supporting 1.3 million jobs.

GE makes medium-voltage switchgear at its facility, which already employs about 320 people at a site on the line separating Burlington from West Burlington. Toyer says challenges overcome included ingress and egress on an arterial road, and aligning software training needs with curriculum taught at Southeastern Community College in West Burlington.

Hutcheson says the area overall has a good profile for engineering, but not necessarily software engineering, and understanding that distinction is crucial for success.

“We have to recognize what we are and what we are not,” he says. “We are an industrial, blue-collar community. Our people work hard, and know how to use things. We’re not a fit for every industry out there, but we are a good fit for companies that want to be globally competitive in making things.”

Though the GE site is in West Burlington, the majority of the needed road improvement was in Burlington.

“We had to get both cities to make investments into the project” as part of a grant application submitted to the state, says Toyer. “Some citizens asked, ‘Why are we paying for a project that’s in West Burlington?’ But the employees live in both cities, and some of the folks that work there are going to spend their money in Burlington. We were able to bring both together to participate in the grant. We are really in the business of being complex problem solvers, putting together the right resources at the right time.”

Similar transportation issues with the Silgan project were addressed via city-state collaboration on another road improvement grant. And concerns about permitting were quickly quelled when the GBP team brought building inspectors and planners into one room with the company’s general contractor and design firm.

“We don’t have to promise expedited permitting because our permitting is already expedited,” Toyer says. “It’s an incentive in and of itself.

“It’s not a short cut, just the way we do things,” adds Hutcheson.

Other projects just outside GBP’s territory nonetheless are big for the greater region nonetheless. Hutcheson cites the $2-billion Iowa Fertilizer project, which considered Burlington on its short list, but ultimately landed in Wever, just to the southwest on the Highway 61 route to Fort Madison.

“In the old days, you’d think that would cause some bad blood,” says Hutcheson. “But at the end of the day, the project landed within 10 miles of Burlington. Even though we won’t receive tax revenue from that plant, it landed in our region, and brought 4,000 temporary construction workers. It’s had a tremendous impact on our local economy. Everyone here has seen it really matters — when a neighbor does well, it does really good things for us.”