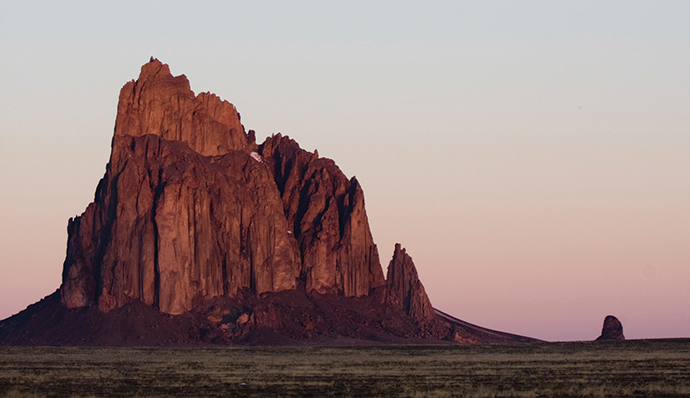 Measures taken to make New Mexico more business-friendly — less “punitive” to those seeking manufacturing sites, as Gov. Susana Martinez puts it — are paying off. The Land of Enchantment is steadily climbing rankings of Western business locations, including a recent one naming it the state with the lowest effective tax rate.

In mid-February, Gov. Martinez took a break from negotiating her Fiscal Year 2017 budget proposal with legislators in Santa Fe to speak with Site Selection Editor Mark Arend about progress on several fronts, including economic opportunity on the border with Mexico, energy management and workforce development. Following are excerpts from that conversation.

Site Selection: New Mexico, according to your June 2015 commentary “New Mexico: Crossing a border, finding a new business model,” is knocking down barriers by lowering taxes, boosting exports, and building confidence with leaders across the border in Mexico, among other measures. Is this a new approach — to leverage your state’s key location on the US-Mexico border?

Gov. Martinez: Yes, it is. But the first thing we had to do when I came into office was to straighten out the largest structural deficit in the history of New Mexico. We did that by not raising taxes and making sure we were living within our means. We had to diversify our economy because the federal government continues to be so dysfunctional that we couldn’t rely on that, we had to rely on ourselves. We had to roll out the red carpet and make New Mexico business-friendly and attract investment, and help those businesses already here grow and thrive.

Also, we had a good relationship with Mexico that allowed us to work internationally. We had the good fortune to remove the locomotive fuel tax [in 2011], prompting Union Pacific to come from El Paso, Texas, to New Mexico with a $400-million investment to build a 21st century hub — the Santa Teresa intermodal transportation facility [opened in May 2014] — that allows us to export to Mexico and have their exports come here.

“Ernst & Young has recognized New Mexico [in 2014] as having the lowest effective tax rate for manufacturers in the nine-state Western region. That’s up from the third-worst in the region when I took office.”
— Susana Martinez, Governor of New Mexico

We had been the worst in manufacturing and export growth in the West, and now we are doing amazing things. We are building the infrastructure [on the border], where there had been none. It was our job as the state government to help those communities that did not have a strong tax base to help them with that, so trucks could cross safely back and forth across the border, for example.

The vision is to make New Mexico the gateway of trade for the Americas. These infrastructure improvements and other investments really benefit the entire state.

SS: Corporations tell us all the time that they gravitate to states whose financial houses are in order for the long term, where they can invest confidently because they have predictability in terms of incentives packages and can count on low, or at least not rising, business taxes into the future. Is New Mexico delivering this predictability?

Gov. Martinez: In our first year, we had to go after the structural deficit and do so without raising taxes, because predictability had to start there. And we did that — without raising taxes. That was very challenging, because we had people in both parties pushing really hard for us to raise taxes to close the deficit and balance the budget. And we have had budget surpluses every year since then. It’s been challenging this year because oil and gas prices are going down. However, because we are diversifying our economy, more businesses were coming to New Mexico, helping us weather the storm. We have cut taxes 37 times — the corporate income tax has been cut by 22 percent from 7.6 percent to 5.9 percent. In fact, Ernst & Young has recognized New Mexico [in 2014] as having the lowest effective tax rate for manufacturers in the nine-state Western region. That’s up from the third-worst in the region when I took office.

We want people not only to come here to New Mexico to develop technology, but to stay and manufacture it here. In the past, it was common for companies to leave and do the manufacturing elsewhere, because our tax structure was punitive. Now, we have more PhDs per capita in New Mexico because of our national labs, and they are partnering with small businesses and manufacturing here now, because they can do that now. We don’t punish them or tax them when they export their technology throughout the world.

SS: Your budget proposal includes a number of economic development measures. Are there any you want to draw particular attention to?

Gov. Martinez: We have secured $89 million for water infrastructure. We are a very large and rural state, so it is important that we invest in that water infrastructure to address the historic drought and to assist families and businesses, so businesses could rely on that as they grow here. 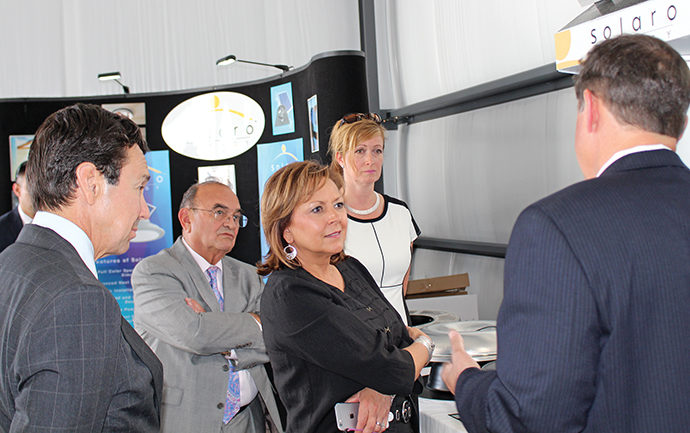 Gov. Susana Martinez (center) speaks with a representative from Solaro, a leading manufacturer of American-made solar-powered products.
Photo courtesy of the Governor’s Office of New Mexico

We have a Local Economic Development Act program, which is our closing fund. If a state doesn’t have that, it’s not competitive. When we took office, it was at zero. It’s now at $50 million and it has helped us bring in some businesses. [The Fiscal Year 2017 budget proposal called for “roughly $10 million” in funding for LEDA.]

Another program is the Job Training Incentive Program, where if you are growing your business or bringing one to New Mexico and need help training employees, JTIP will help pay 50 percent or 60 percent — sometimes more — of your first six months of salaries for new employees. That is now a permanent part of the budget. I have asked that $10 million be added this year — $2 million recurring and $8 million non-recurring.

We also are seeking $1.25 million in non-recurring funding for a new Rapid Workforce Development Fund, which would allow the state to quickly train a specialized workforce through one of the state’s community colleges or other higher education institutions in order to close a business recruitment deal. By investing in this fund, we can tap into yet another resource with which to recruit companies from out of state and help existing New Mexico businesses grow. The two-year and four-year institutions are all on board with this fund.

SS: You mentioned the drought and the recent investment in water infrastructure. What should investors who are heavy users of water, food processors for example, know about New Mexico as a location option in the Southwest?

Gov. Martinez: I’m the first governor of New Mexico to bring forth a comprehensive energy plan since 1991. And it’s the first to include water, because we do use a lot of it as a large producer of oil and gas. We have to be cognizant of how to use water that has been used before and how we prevent water supply emergencies. We have been good stewards of our water, and we are reducing freshwater consumption in the energy production process so there is sufficient water for use by companies coming here.

We have had good amounts of rain and snow in the last year, which helps fill our aquifers. And some industries are becoming very good at using water as many as six times, so they are not using fresh water each time. We work with other states that also deal with drought and with our National Lab to find ways to not use water in certain areas, which helps in terms of predictability businesses look for.

SS: What should readers know about the current status of this plan?

Gov. Martinez: The 2015 New Mexico Energy Plan is the result of over a year’s worth of work, during which a number of inclusive listening sessions were held throughout the state with community leaders, members of the public and energy stakeholders. It will be updated at regular intervals in the future, with opportunities for public input each time.

“Improving our energy infrastructure, responsibly developing and producing energy of all types, and better preparing our workforce for the needs of our energy sector are all critical components not only of a strong economic future, but of helping lead America to energy independence.”
— Susana Martinez, Governor of New Mexico

We have embraced an all-of-the-above approach to producing energy — we have more than 350 days of sun, plenty of wind around the states, oil and gas. We don’t rely on one energy source. We are one of the most energy-rich and energy-diverse states in the nation. We have excellent opportunities to utilize this position to grow our economy. Improving our energy infrastructure, responsibly developing and producing energy of all types, and better preparing our workforce for the needs of our energy sector are all critical components not only of a strong economic future, but of helping lead America to energy independence.

We are investing in pipelines to be able to take natural gas to part of Mexico — to Chihuahua, where they need it, where they have not been able to keep up with development of the oil and gas industry. They are years behind in that area, and this helps offset the effects of lower oil and gas prices we are now seeing.

The key point about the energy plan is really to make New Mexico, both on water and energy, the energy crux of the entire country and to provide exportation of natural gas and to encourage bilateral development at the US-Mexico border.

SS: Site selectors are increasingly savvy about how they evaluate potential labor pools. They want quantifiable evidence of available skill sets, not just reassurances that an area has a great workforce. How is New Mexico working to deliver the skills data they require?

Gov. Martinez: First, on the higher education side, we have streamlined the number of credits a student needs to be an excellent engineer or nurse or what have you. And we are reducing most degree requirements to 120 credits at state colleges and universities.

We have invested heavily in workforce development — everything from preschool education to public education reforms. We have been very focused on early college and high school. In terms of the JTIP and the Rapid Workforce Development Fund, the measurements we are using are showing that employers very much monitor successes we have had, through creation of an employability partnership. Businesses tell us what they want in terms of employee needs. There is an annual survey that is done of employers in New Mexico that asks if they are satisfied and what kinds of employees they need. We have learned that employers are by and large very satisfied with the quality of worker they are getting, and in turn they are telling us what their future workforce needs will be so we can invest in certain disciplines — welding, or truck driving or pharmacy technicians, for example. We adjust annually for those employment needs.